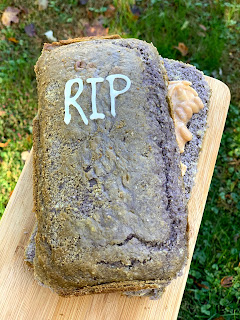 For my final Soup-er Sunday (and also as a kick-start to these final days before Halloween!) I’m bringing you a spooky presentation for your soup. It's kind of more a centerpiece in that the soup to cornbread ratio isn't quite right for a meal in an of itself. But it DOES look fun on the table!

Because we’re working with corn bread, I’d suggest you serve a soup with some tex-mex flavors and also something hearty (with less liquid, so the bread bowl vessel holds up). Like your favorite chili or even this tortilla soup.

I found a recipe called Chili-Filled Coffin in my old Taste of Home magazines. Then I just took the method from that recipe to make the coffin, and filled it with my favorite white bean chicken chili. 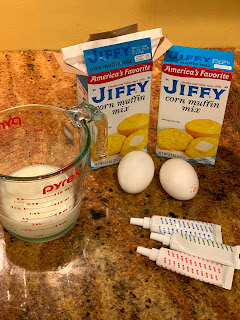 Preheat your oven to 400 degrees.

Grease a 9x5 loaf pan and set aside.

In a large bowl, combine the first 4 ingredients and stir just until moistened. 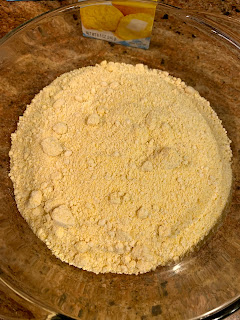 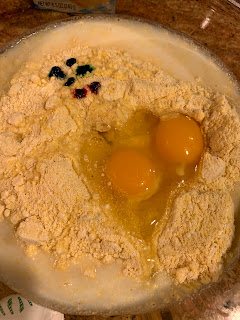 *Because I didn’t have black food coloring and had to essentially make my own with the other three colors, I had to stir more than I otherwise would have and, I think, it did overwork the batter a bit. (I started with 2 drops of each color. It wasn’t nearly dark enough, and it was too green. So I added more red and blue, and kept stirring and adding and stirring and adding until the color looked grayish.)
Pour into loaf pan and bake for 30-35 minutes or until a cake tester or toothpick inserted near the center comes out clean. Cool for 10 minutes before removing to a wire rack to cool completely. 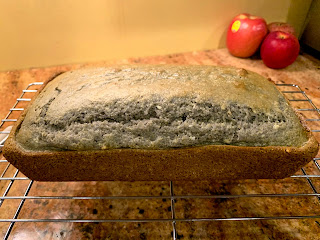 If, like mine, your loaf gets a little golden, you can use a serrated knife to lightly trim away the brown. I didn't take off much, just the top-most crumbs. I liked how it looked a little craggy because it's supposed to look weathered. 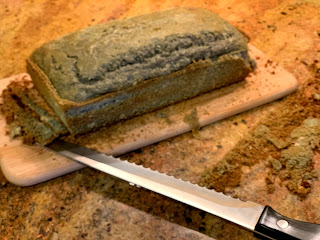 Cut the top quarter off the cooled cornbread loaf. I judged the quarter as the quarter of the side, since the dome section of the loaf isn't uniform and I didn't want it to crack while in motion. 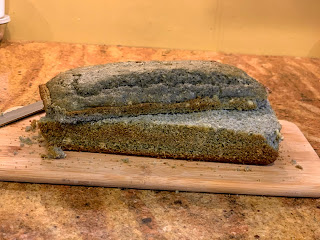 Carefully hollow out the bottom, leaving a ¾” lip all the way around. I used a serrated knife to make the initial rectangular shape inside, then I added cross cuts so I’d have about 5 smaller slices in the loaf (to make them easier to remove). I used a fork to dig out the smaller pieces. The first one I had to do kind of blind (like cutting the first piece of pie or cake) but once the first one was removed, I could go in from the side and get a cleaner, more uniform section from underneath.

I set those 5 slices aside to make into smallish “tombstones” in the soup itself during presentation. 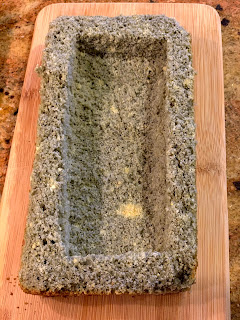 Carefully fill the empty space with your filling. I only got a little over a cup of my white bean chicken chili in that hollowed out space. (The original recipe says to fill 2.5-3 cups of chili in there! As if.) 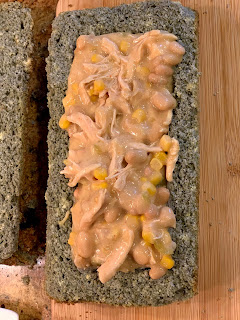 Spoon 1Tablespoon of white queso style cheese into a small sandwich baggie and snip off a small piece from the corner. 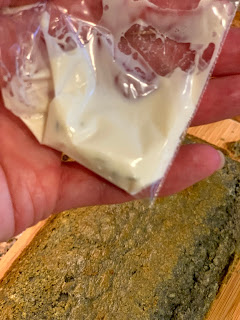 With the domed part of the top quarter portion of the "coffin" loaf facing you, write RIP in the cheese sauce. 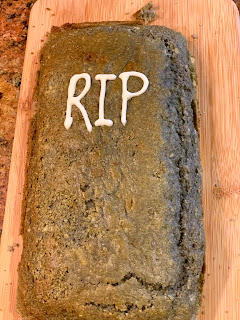 Carefully place the lid onto the chili-filled bottom portion, slightly off to one side (so you can still see some of the filling inside the "coffin.") 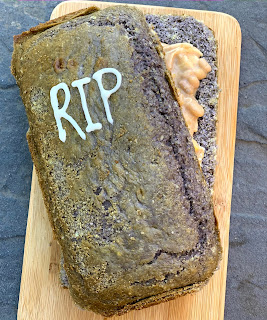 Note: I left my coffin on the wooden cheese board for serving. You could also place it on a serving platter. 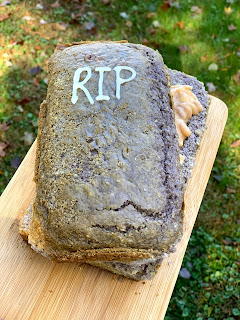 Once everyone has ooed and ahhed over your coffin, you can cut it into portions so everyone gets a slice of cornbread (just beware of the soup oozing out when you cut down--this is another reason heartier soup is a good idea as a filling.)

You could opt to cut up and share only the top portion and leave the soup-filled portion uncut (less of a mess, for sure!) Then you can use a spoon to remove the soup from in the lower portion, OR let one lucky person enjoy the ENTIRE BOTTOM section like a bread bowl. But--beware--that's a lot of corn bread.

You can ladle portions directly into bowls and use the same method explained above to write RIP on the smaller pieces of cornbread we'd saved from earlier. Serve sticking out of the soup. 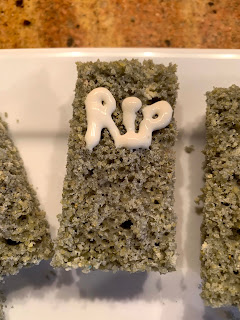 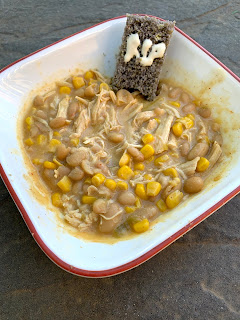 The cornbread was tasty, but I'm not gonna lie: it was DRY. (As I mentioned earlier, I think it was because I had to stir it much more than normal to disperse that color through it and that overworked it. It's also possible it was ready prior to the end of the 30 minute bake time. Normally I would've checked it sooner, but I was in the middle of other tasks and got distracted until the timer buzzed. Alas!) Luckily, because it was served with a soupy situation, it took care of the issue.