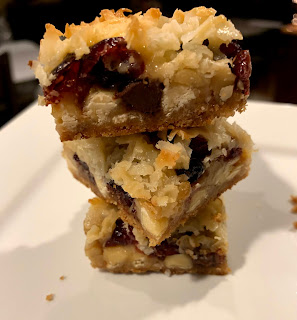 Have you ever had a seven layer bar? 7 layers sounds like a lot of work, doesn’t it? But when those layers are, essentially, just poured or scattered over the layer before it? Pretty damned easy. They come together kinda like…magic?! Yassssss.

I found this gem of a recipe called Cranberry Bliss Seven Layer Bars on the Averie Cooks blog and I followed her recipe as written. (Because you don’t need to mess with perfection, amiright?) Here’s the link to it.

The only thing I did differently than she did is use my 11x7 pan instead of an 8x8 one. You can use either. Whichever you choose, be sure to line it with aluminum foil and spray with cooking spray.

The most time-consuming layer of this is the bottom one—the graham cracker crust—but it isn’t even difficult. It’s just melting ¼ cup butter and stirring in ¾ cup of graham cracker crumbs. Then you press those into the bottom of your foil-lined pan making it as smooth and flat as possible. (Averie notes that it may seem like a scant amount of crust, but not to worry about it. She’s right. There’s plenty else to fill in the gaps down the line.) What’s that? Layer 1 done? Already? Yes. Layer 1 DONE. 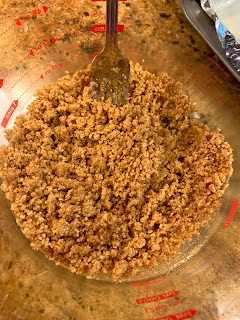 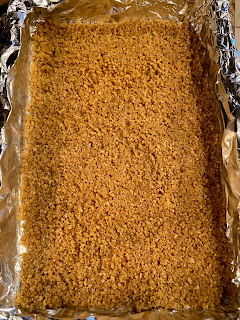 Next up, white chocolate chips, semi-sweet chocolate chips, chopped walnuts, dried cranberries, and sweetened shredded coconut flakes. In that order. Sprinkle those evenly, one at a time, over the crumbs. You can see the measurements on the cups in my photo below. (Otherwise, they’re listed in the Averie Cooks blog linked above.) 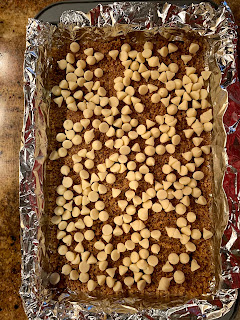 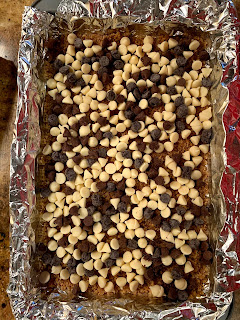 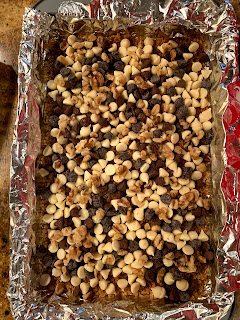 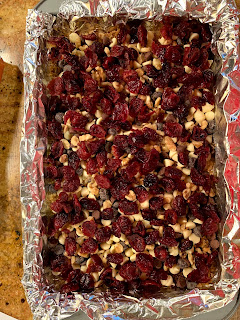 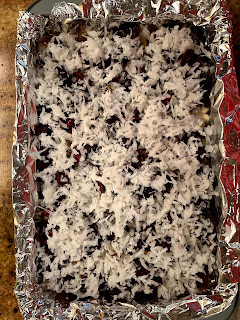 Finally, pour 2/3 of the can of sweetened, condensed milk (otherwise known as nectar of the gods) on top. Just eyeball it. 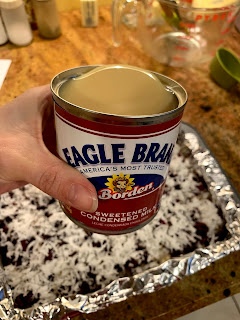 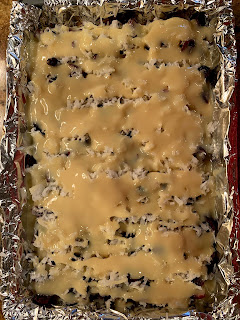 Then bake it for 20 minutes, until light golden brown around the edges. You need it to be lightly set. However, keep your eyes on them toward the end because the coconut burns easily. (Note from Avery: watch the bars and not the clock because different ovens bake differently. They may take longer or shorter.) 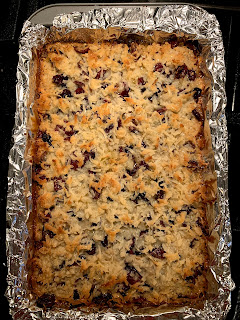 Cool on a wire rack for at least 2 hours—better still, overnight—before slicing and serving. They’ll firm up as they cool. Then you can gobble them up. 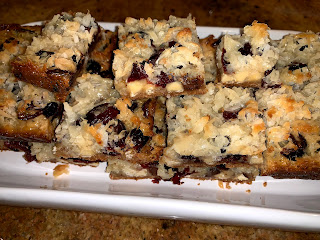 I’m sure you’ll agree they are pure, magical bliss! (Hence the name.)
Posted by Natalie M at 8:41 AM