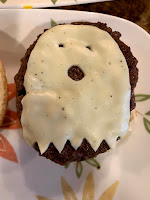 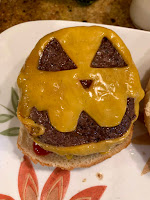 Ever have one of those situations where you painstakingly choose what you think will be an impressive gift for your kid, but when you present it to them, it’s clear they’re more jazzed about the box it came in, and you’re sitting there like, “Hmm… I could’ve saved SO much time and money here…” (It’s ok. You can admit it. It’s happened to all of us.)

Well, guess what? That happens to me a lot when I make elaborate recipes. I’ll toil and sweat and the product is well-received but easily forgotten. But when I serve some boxed mac and cheese, the kids go wild for it. (Frankly, it’s insulting!)

Anyway. What I’m sharing today is the box. The simple thing among a sea of less simple things that got a “wow” reaction. (Like the box in this vintage Faerie Tale Theater clip -- check it out at the 3 minute mark. Was anyone else obsessed with Faerie Tale Theater as a kid? Back when video stores were still a thing, I'd ALWAYS rent either one of these tales or Thriller Michael Jackson. Over and over and over again.)

Today’s “recipe” reminds me so much of the kinds of things I used to do back when I first started celebrating October one day at a time, which makes it feel like a perfect way to kick things off. It’s quick, simple, and doesn’t even have a recipe with it. I saw a version of it in one of my old grease-stained Taste of Home magazines. It appeared under the heading Ogre and Pumpkin Sliders, but I didn’t have the time or inclination to actually make a burger from scratch the day I wanted to make these. So I took the visual concept and went from there. They’re hella easy to customize.

Feel free to use your favorite burger-- whether it’s fresh, frozen, pre-formed, Impossible, or otherwise. You can use any type of patty you like. Slider or full-sized patty, it matters not.

The day I made them, I used 90% lean beef patties. I seasoned them with salt and pepper and cooked them in a pan on the stove.

While they cooked, I laid out 2 slices each of yellow cheddar and white American cheeses (cheddar for my husband and older daughter; American for myself and younger daughter because the only cheese worth eating on a burger is American, thankyouverymuch.)

For the cheddar cheese, I used a paring knife (and small triangle cookie cutter—though I could easily have done the whole job with only the knife) and cut out the shape of a jack o lantern face. I didn’t use a template or anything—it’s easy to just eyeball it. 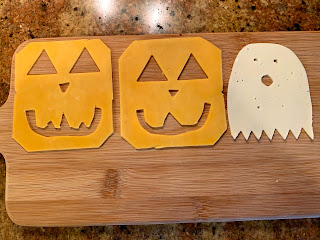 For the white cheese, I cut out the shape of a ghost. I wanted to preserve as much cheese as possible so my burgers were still sufficiently cheesy, so I made small features on the ghost. (It occurs to me now I might also have tried a skeleton face. Dote!)

When the burgers were 1-2 minutes from being finished cooking, I laid the cheese on top of the patty. 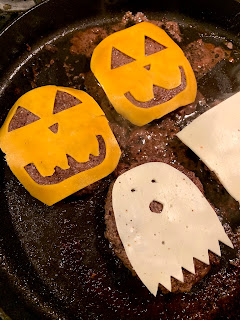 When I served the burgers, I made sure to leave the top bun off to the side so everyone could see the festively-shaped cheeses. 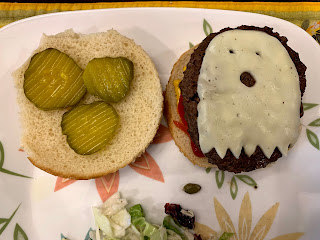 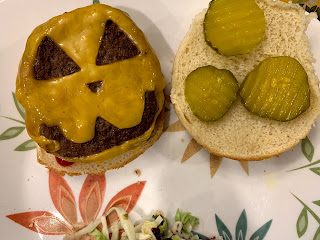 You would’ve thought I’d slaved all day over this instead of just taking an extra minute to carve some cheese, but that’s how excited my girls were at the novelty of cut cheese. (Insert fart joke here…or, rather, maybe don't, because this is a blog about food, after all, and that would be gross. So okay, forget the fart thing. Sorry I brought it up.)

They were extra excited adding their ketchup because they thought it looked like “blood.” And I think that’s kinda the mark of a quality meal, amiright?

The moral of this story is even if you don’t have tons of time to make elaborate meals or do crazy culinary feats, you can surely impress your entire family by simply cutting some cheese.

(What? I SAID forget that other thing! If you’re still thinking it now, that’s on you.)
Posted by Natalie M at 11:57 AM