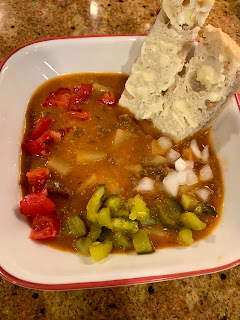 This year I’m introducing a sub-category of posts within the month. I’m calling them Soup-er Sundays and will, of course, feature soup recipes. I was inspired to go big for SOUP-ER SUNDAYS when I flipped through the September 2019 issue of Eating Well magazine and they had several pages of soup recipes!

As the weather gets cooler, my body automatically shifts to wanting to eat hearty things like soup. (Especially if it’s a rainy, cool day!) There’s something so comforting about a hot bowl of soup and a thick slice of bread (or tasty crackers or even tortilla chips as the case sometimes may be, depending on the soup!)—it warms you from the inside and fills you up. I just love it!

And another thing I love about soup? When I make it, my family gobbles it up. They’re quite enthused for soup. (Especially my youngest—she’s never met a soup she didn’t love. She takes after my dad that way. He’s CRAZY for soup.) Ergo, I’m excited for this Sunday sub-series in my month of tricks and treats!

Let’s start out with the hearty Cheeseburger Soup recipe I found in the Eating Well magazine. Here’s the link to their recipe.

I followed the recipe as it was written (except I didn’t bother about the parsley & I used a mac and cheese blend of shredded cheeses because it was the closest I could find to what they'd called for) and it came together with ease. In fact, it came together even more quickly since I prepped my ingredients the night before I needed them—I did all my slicing and dicing when I had more time. So if you want soup but don’t have time to stand there chopping the day-of, consider pre-chopping the night before. (Pro-tip: potatoes, once cut, tend to oxidize (read: turn brown) so store them in water to avoid that.) 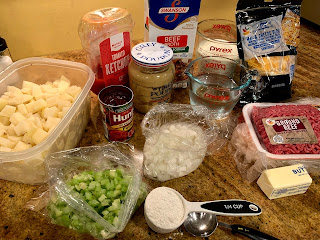 Brown the meat in your pot, breaking it apart so it’s in bits. 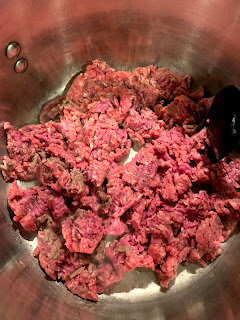 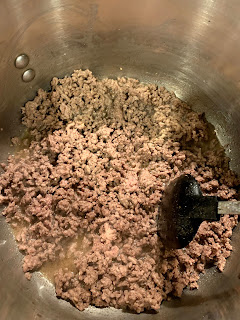 Add the celery and onion and cook until softened, about 3 minutes. 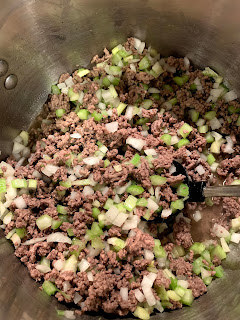 Add the beef broth, water, and potatoes. Bring to a boil, then partially cover, turn down the heat, and simmer for about 15 minutes, or until potatoes are fork-tender. 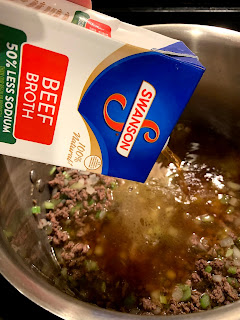 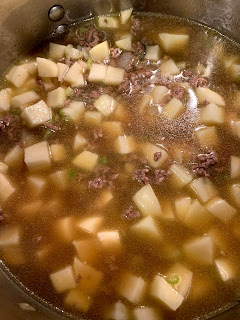 Meanwhile, in a medium saucepan over medium heat, melt butter. 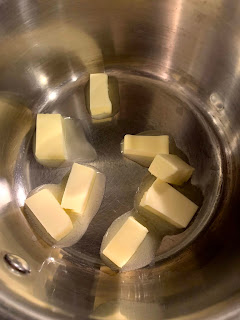 Whisk in flour. It’ll get thick and pasty. 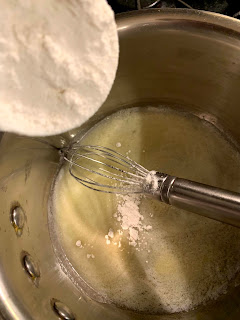 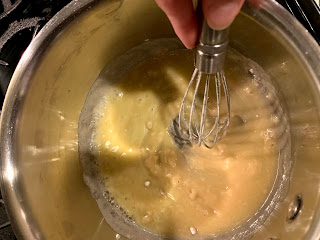 Slowly add milk—a little at a time so it maintains its thickness—stirring constantly. Cook until thickened (about 2 minutes). 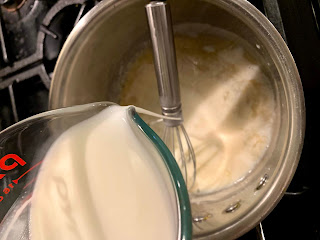 Whisk in the tomato paste, ketchup, and mustard. (You’ll notice it looks like a thick tomato sauce.) 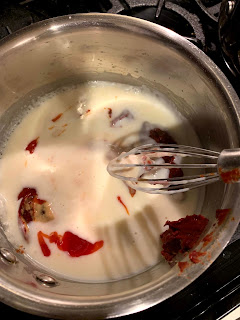 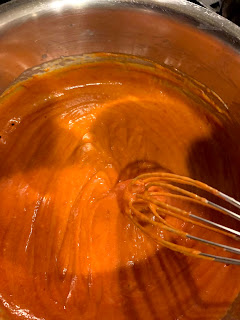 Add the tomato-milk mixture into the soup, and stir well to combine. 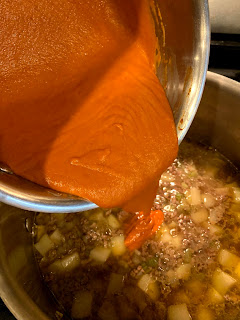 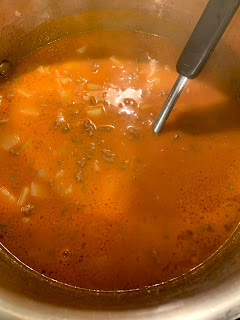 Bring it back to a boil, then reduce the heat to a simmer. 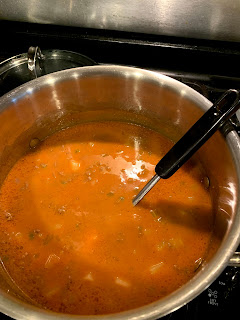 Add cheese, a little at a time, and cook just until cheese melts. 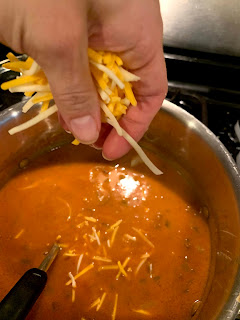 Top with the works – we used quartered cherry tomatoes, raw diced onion, and diced pickles. I highly recommend not skipping any of those toppers because they really added to the flavor experience. The bites I had without the added freshness were inferior to those with it. Serve with crusty buttered roll. 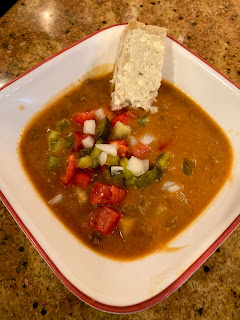 My soup-lover daughter took some to school for lunch the next day, and came home raving about how delicious it was a second time. And I brought some over to my dad, too, and he was, not surprisingly, also a big fan.

I hope you’re also “soup”er pleased when you try this one.

* When I pack soup for lunchboxes, here’s how I do it. This is the container we have. I fill the thermos with very hot water and perch the lid on top, leaving it to “pre-heat” while I heat up the soup. I microwave the soup in a microwave-safe bowl until it’s very hot—in my microwave, that’s usually about 2-2.5 minutes. I generally heat it about 30 seconds further than if I were going to serve it right away. Pour the hot water out of your thermos and pour in the hot soup. Twist the lid tightly to close, and voila! My daughter has last lunch and it is still steaming hot when she gets to it.
Posted by Natalie M at 12:33 PM