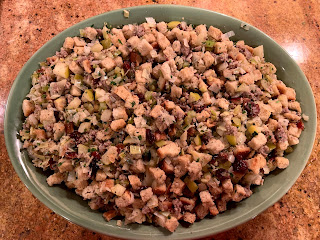 I’m carrying my thoughts-of-Thanksgiving theme one more day, here, and I hope you’ll indulge me, because this one is really good. (Also? In my month-of-tricks-and-treats here at home, I actually featured an early-Thanksgiving one night for dinner. So it IS happening in real life, too, and not just on the ol’ bloggy blog.)

For as long as I can remember, my mom has hosted Thanksgiving. When I was a kid—everyone came to us. Now that I’m an adult, we mostly still go to my parents’ house on Thanksgiving. It’s just tradition. Also part of that tradition are the foods people bring with them. My grandmom has always been in charge of stuffing. She always brought two-- one with celery and one without.

For me, the stuffing was fine. In fact, that’s kind of how I feel about most Thanksgiving foods. They’re fine, but there are very few I’m enthused to eat.

Something I AM enthused about, though, is trying new recipes. My thought is how am I going to find a new favorite –something that might become part of a new tradition—if all we do is keep making the same things over and over and over again?

Therefore, maybe 5 years ago or so, I said I was going to bring a different stuffing. Because it sounded like it would be delicious and I wanted to eat some and when else would I have occasion to make such a large portion? So I brought it and there were 3 stuffings that year. And people loved it. The next year, people asked if I was bringing that “good stuffing” again. So I kept bringing it.

And now? Gram only makes one stuffing for Thanksgiving.

This is a Hearty Boys recipe. Remember them? I watched them back on the very first season of Food Network Star. They won, btw, not that you see them much anymore. Or really most of the FNS winners except for that over-exposed, backward-sunglasses-wearing, big-bite-taking Guy Fieri.

Speaking of stuffing our faces…let’s get to this recipe.

Saute the sausage, crumbling with a spoon, in a large heavy skillet over medium-high heat until cooked through, about 10 minutes. 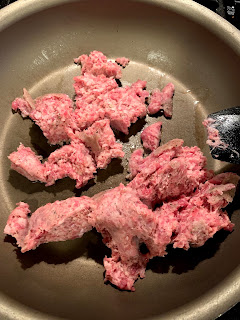 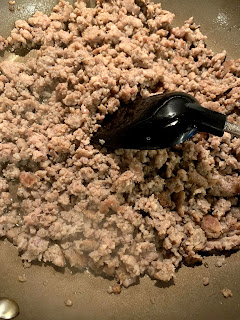 While that cooks, soak dried cranberries in boiling water for 15 minutes. Drain and set aside when done.
Using a slotted spoon, transfer the cooked sausage and drippings to a large, deep bowl.

Melt the butter in the same skillet over medium-high heat. 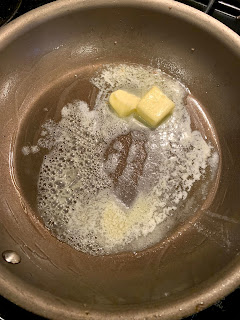 Add leeks, apples, celery, and poultry seasoning to the skillet. Cook about 8 minutes or until the leeks are soft. 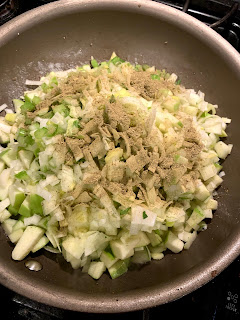 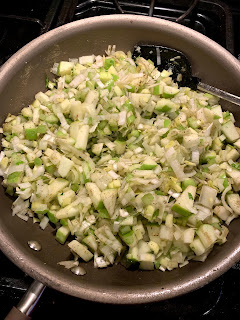 Stir in the drained cranberries, sage, and rosemary. 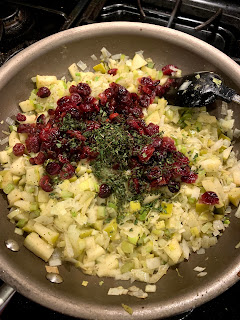 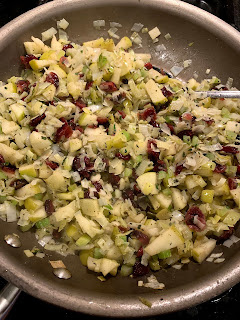 Pour the contents of your pan into the bowl with the sausage, plus your parsely, and stir. 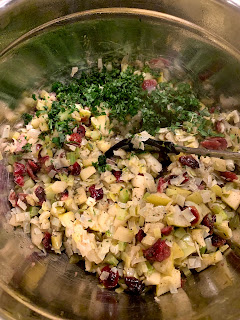 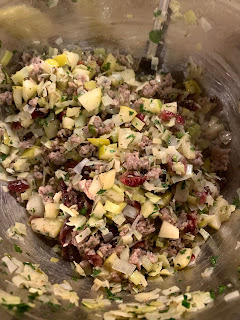 Next, mix in the stuffing mix/bread cubes. 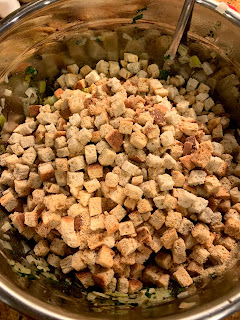 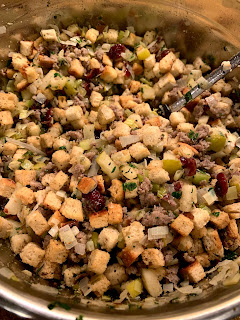 Add the chicken stock--a little at a time-- until the stuffing is moist but not mushy! Season with salt and pepper. This is the step where I do a lot of tasting to adjust the seasonings and check the moisture level. Remember, you can add extra broth, but once it’s in there, you can’t get it out. 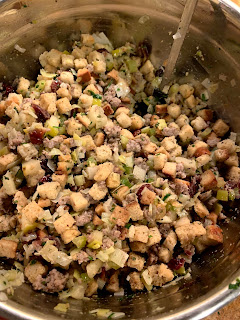 Pour into your casserole dish and bake, uncovered, for 20-30 minutes (mine usually takes closer to 30) or until the center is hot and the top is browned and crisp. Remove and serve immediately. 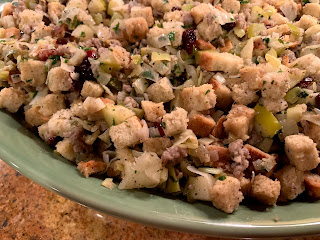 Note: If you’re like me and need to prepare this a day or two before you want to serve it, you can. Just follow all the directions through pouring it into your casserole dish but DO NOT BAKE. Instead, cover and refrigerate up to 2 days. Keep in mind that when you bake, it usually takes longer (30-45 mins) because the stuffing and your dish are starting off cold.

And there you have it. Beautifully layered fall flavors for a perfect side dish.

I urge you to give this a try – maybe it can be part of one of your food traditions!
Posted by Natalie M at 1:16 PM