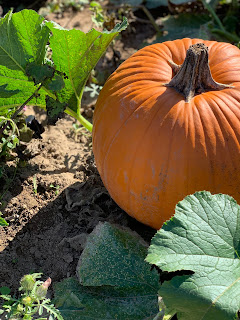 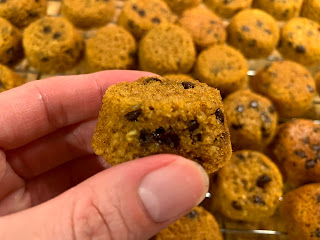 This past weekend my family and I enjoyed our annual apple and pumpkin picking day. The weather was perfect. Blue skies, light breeze, low humidity, and brisk temperatures. We picked Jonathan, Winesap, and a few Golden Delicious apples, and bought 6 pumpkins totaling almost 100 pounds. I don’t know exactly why we needed that many, but we did. The pumpkins looked beautiful this year—not just the classic large, rounded pumpkin-y ones, of which there were many, but also the taller, more oblong ones. The “Berts” of the bunch. (When I was a kid, we’d always get at least one “Bert” and one “Ernie” shaped pumpkins. One year my mom even cut out construction paper shapes and attached them to the pumpkins so they really BECAME Bert and Ernie. Now, over 30 years later, I still insist on having at least one of each kind.) Some years it’s a challenge locating a good Bert but this year there were tons. Yay for happy traditions! 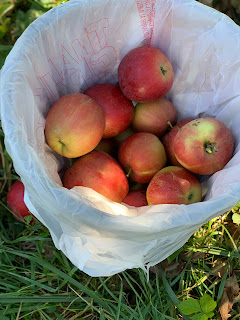 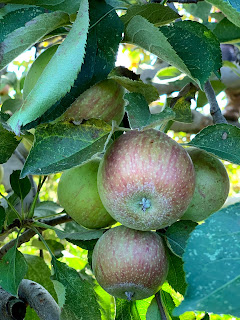 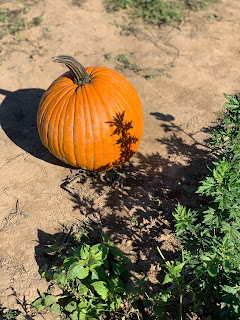 Speaking of pumpkins, today I’m sharing my first pumpkin recipe of the month. I found the recipe in the September-October 2018 issue of Eating Well magazine. I thought these Pumpkin-Oat Mini Muffins looked like something my kids would enjoy since they love when I make mini muffins. The week before I made these, I made our favorite double chocolate banana muffins and they were devoured. I assumed these would be a similar hit.

Full disclosure: they weren’t. At least, not with my kids. One didn’t prefer the pumpkin flavor, and the other didn’t love the texture with the oats. (Though one of her friends was happy to share at lunch, so it wasn’t a total wash.) But the adults who ate them seemed satisfied with them and reached for seconds and thirds. (Which, conveniently, with a mini-muffin, feels perfectly acceptable.)

That said, they were not my favorite pumpkin treat I’ve made.

First, they stayed pretty flat. I suspect that’s because the batter was so wet that there wasn’t a lot in them to give them lift. I also think my food processor didn’t get the oats finely ground enough which likely impacted the lift.

Second, the oats lent a chewy-grainy texture I didn’t love. It was okay, but I just prefer the cakier texture of classic muffins. (Which, again, would likely be remedied or at least improved by ensuring a finer grind on the oats. You’ve been warned!)

Finally, after the first day of baking them, they got wet on the top. This is a common muffin-phenomenon, but these got even wetter than an average muffin, which I found annoying and sort of off-putting when I’d reach for one. (Here’s a postI found on how to avoid this.)

All that said, the recipe came together pretty easily in my food processor. You could also use a blender. But whichever you choose, do be careful about getting as fine a ground on those oats as possible. 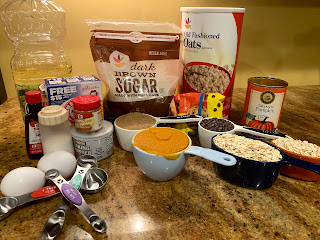 Preheat the oven to 350 degrees F. Coat 24 mini-muffin wells with cooking spray and set aside.

Pulse oats in food processor or blender until finely ground. (You’ll want to take yours further than mine are in this picture, per the explanation above about the texture of my muffins.) 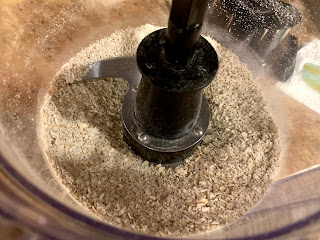 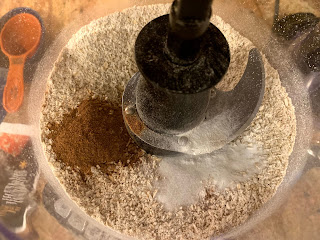 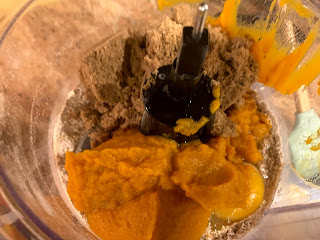 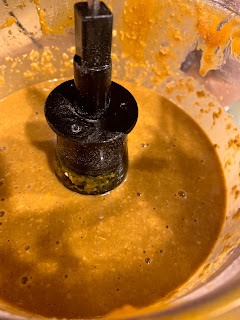 Stir in chocolate chips (by hand—don’t use the blade for this part.) 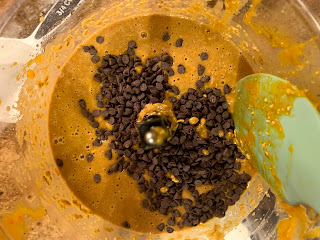 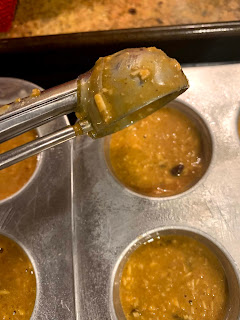 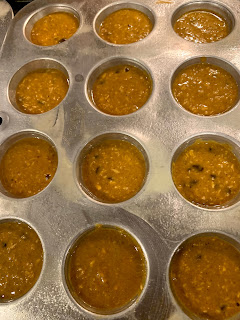 Bake until a toothpick inserted in the center comes out clean, 15-17 minutes. Cool in the pan on a wire rack for 5 minutes, then turn out to cool completely. 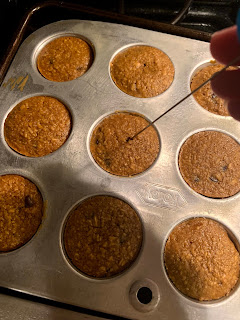 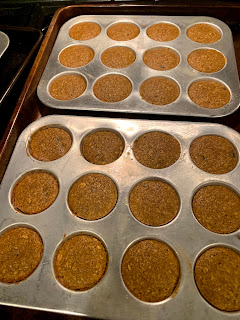 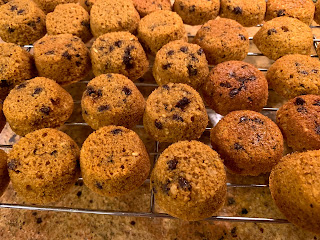 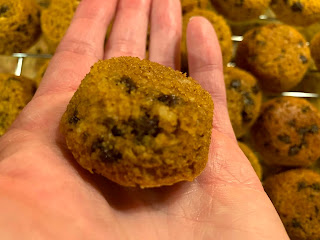 You’ll see from the photos that the muffins look better upside down, so I left them that way.

I know this post isn’t exactly a glowing review for this recipe. However, I don’t want to give the impression they were terrible, because they were definitely not.

It’s more that, as the world is so full of recipes and life is so short on time, it’s unlikely I’d make this particular recipe a second time. I’d simply try a different one.

That said, the flavor was nice and pumpkin-y and if you have gluten sensitivities, the oats in place of regular flour would make these a solid choice for you. (Note: an online search indicated that some canned pumpkin purees may have been produced in plants that process gluten, so be sure to check the can you’re using. An online search also indicated Libby’s is gluten-free. Just as an FYI.)