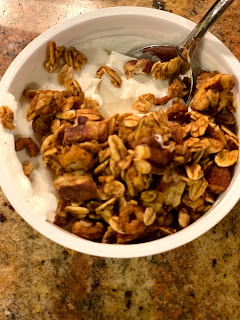 Do you like granola? I do. I like it with yogurt or plain oatmeal to add extra flavor and crunch.

My go-to recipe for granola is an banana pecan flavor I developed which features pureed banana in place of oil. THAT is based on an applesauce version I found online forever ago, which I adapted for bananas. The banana nut version has old-fashioned oats, crisped rice cereal, pecans, and coconut. It’s sweetened with the pureed banana, a little bit of brown sugar (though I’ve also made it without and it’s STILL GOOD), and a mix of pure maple syrup and honey.

One of my other fave granola recipes is this Maple Almond Cranberry kind I featured on my countdown back in 2017. What I love about that stuff is how extra crunchy it is. That’s because of the oil.

After making these pumpkin-oat mini muffins, I had some leftover pumpkin puree and thought to myself, “If it works with banana, it could work with pumpkin…probably?”

So I decided to give it a whirl, making some tweaks to my banana recipe to pumpkin spice things up. 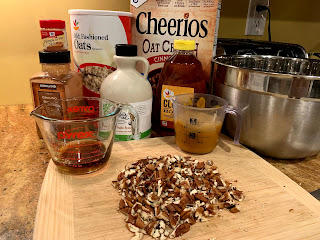 Preheat oven to 300. (This is the perfect temperature for granola because it's just hot enough to toast things but not so hot that it burns. Trust me on that-- I learned from experience!) Line 2 baking sheets with parchment or Silpat. (I prefer Silpat with my granola because it adds an extra layer of insulation against over-browning.) 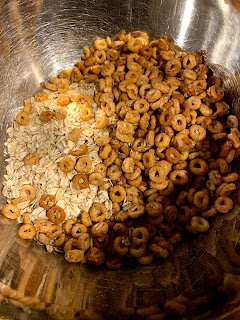 In a small bowl, whisk together pumpkin puree, applesauce, syrup, honey, oil, extracts, and brown sugar. Then pour wet mixture atop the dry mixture. Stir so that all the oat mixture is moistened by the wet ingredients.

Pour onto two baking pans and bake for 45 minutes. Stir every 15 minutes so that the granola toasts evenly. I even swap my pan positions in the oven for more even baking. 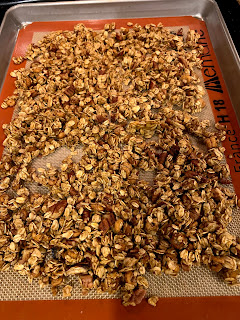 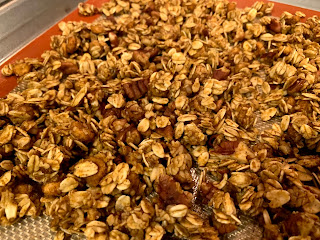 After 45 minutes, pour in an even layer onto waxed paper or parchment laid out on the counter. Cool completely. (It'll get crunchier as it cools.) 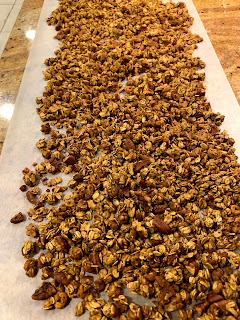 Store in an airtight container once it's completely cool. (If it has any heat left in it, it'll be kind of chewy. So be careful.) 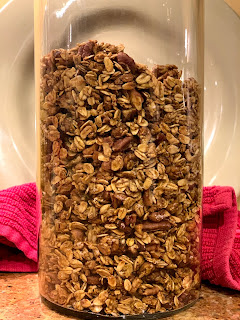 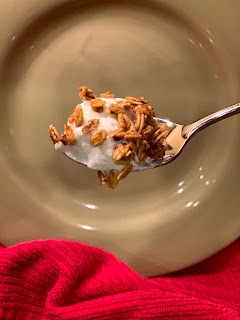 Hope you like it! Side note: I saw some Noosa Pumpkin Pie yogurt at the store the other night so I decided to try it. The pumpkin spice granola on the pumpkin pie yogurt was a perfect combo!!! (You may thank me later for the rec.)
Posted by Natalie M at 10:16 AM