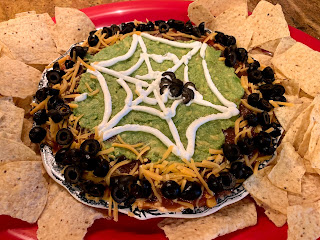 I tend to be pretty traditional when planning a meal: protein, starch, veg. Now it’s complete. But sometimes that feels restrictive. Especially when I see other people engaging in other things like “Meatless Mondays” or talking about eating cereal for dinner. Then I feel like, hmm, maybe I should branch out.

So I’ve tried cycling in things like pick-a-dippa night (modeled after one of our fave appetizers at one of our fave restaurants (Mad Mex), or charcuterie board night (with cheeses, meats, fruits, and nuts). They’re always a big hit and I think, in part, it’s because it feels like I’m serving snacks instead of a main meal. I also think it’s because they can help themselves to their favorite parts of the spreads, whereas when I make a “normal” meal, I insist they have at least some of each of the components.

But because these nights are always met with such enthusiasm, when I saw this taco dip in the fall issue of Kraft’s My Food and Family magazine, I thought serving it as a meal might also be sort of exciting. It’s got most of the same components of a meatless nacho, so why not? (I adapted it a little- cutting back or increasing certain ingredients, so I included what I used in the recipe below. For the original, feel free to follow the link above.)

1 package (8oz) cream cheese, softened
1 Tablespoon taco seasoning mix
1 cup salsa
1 15oz can refried beans (we like refried black beans so that’s what I used)
1 ripe avocados
1 Tablespoon lime juice
2 Tablespoons sour cream
1 cup shredded mild cheddar cheese
½ cup EACH halved grape tomatoes and green onions
Small can sliced black olives
(optional) ¼ cup diced jalapeno (I like the jarred pickled kind because they lend the heat without the HEAT- they're not in the photo because I added them after we started eating) 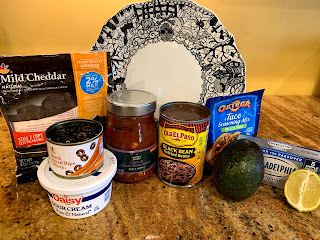 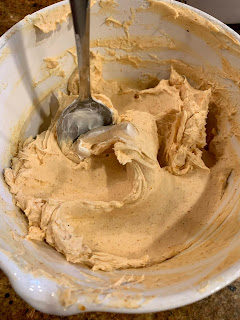 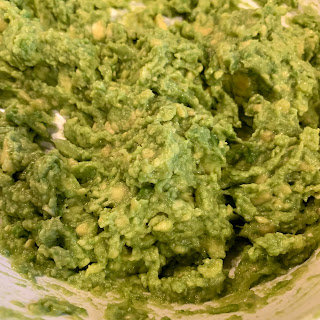 3.     Scoop sour cream into a resealable bag (I suggest freezer bags because they’re thicker and less likely to spring leaks at the seams. Trust me on this. It’s annoying when it happens.), snip a small piece off the bottom corner of the bag, then carefully set aside. 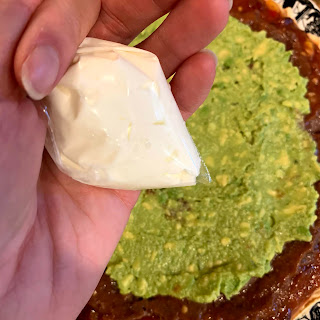 4.     Assemble as follows:
a.     Spread cream cheese mixture onto a large, round serving platter. 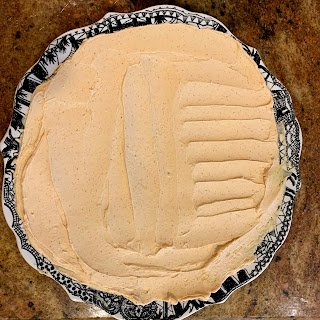 b.     Top with a layer of salsa, spreading not quite as far as the previous layer. (Stop about a finger-width before the edge. 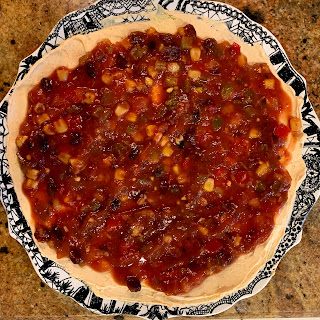 c.     Top with a layer of refried beans, again spreading not quite as far as the previous layer. 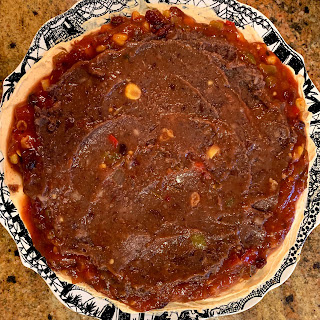 d.     Spread the avocado layer next. 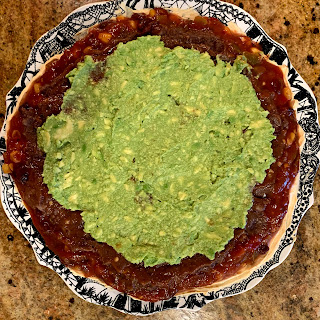 e.     Use the sour cream in the bag to pipe a sour cream spider web. Start with an X shape, then draw a straight line through it. Next, connect the straight lines with slightly curved lines (kind of like wide U shapes)—about 3 per section getting smaller as you move toward the center of the “web.”
f.      Spread olives, tomato, green onions, and cheddar cheese around the outside of the platter. (And, for good measure, feel free to craft a spider out of olives.) 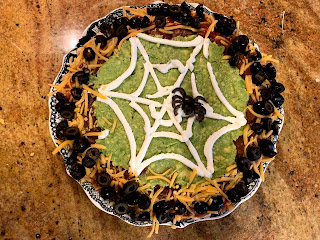 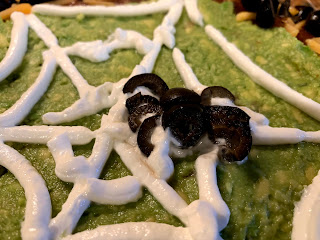 g.     Refrigerate for at least an hour to set up and let the flavors marry.
h.     Serve with tortilla chips. 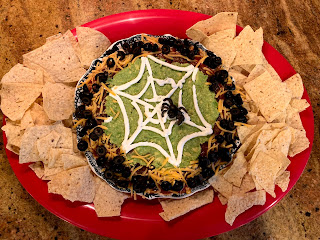 So how did it go? Mostly good. We sort of collectively thought it could use less cream cheese—that layer was pretty thick. I think I’d go halfway on that in future, even if I was serving this as a party dip. (Unless I used a much larger platter. That’s also an idea.) Also? It was waaaaay too much food for dinner for a party of 4. We had at least a third of the platter leftover. (And it doesn’t look very appetizing after the first go-around. I sent some to school with my youngest the next day and she enjoyed the taste of it but remarked about the appearance and how I mustn’t send that for her again. Hahaha.)

Ultimately, I think this would make a much better party dish than main dish (which is its intended function anyway), but I don’t regret trying it as a dinner. It definitely delivered on the fun wow factor and broke up the monotony of chicken and rice and green beans. Thus, it was successful. Now to try some cereal for dinner…
Posted by Natalie M at 1:49 PM