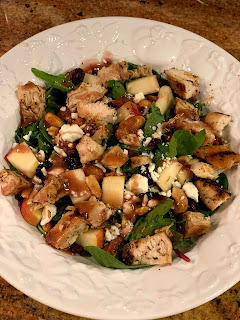 Remember my bestie who, with her boyfriend, sent us our body weight in Wisconsin cheddar cheese (and I used some of said cheese in this soup)? Well, she and that same boyfriend are sort of obsessed with the Apple Pecan Chicken Salad from Wendy’s.

The other day she snapped a pic of her lunch on the go and sent it to me, and remarked that she’d been thinking I should do a homemade version for my blog. When I saw the pic? I was sold.
Could I have googled the ingredients? Checked the Wendy’s website, perhaps? Sure. But it was more fun to try to eyeball the photo and see how I did. I was like a food detective.

It looked like romaine lettuce with apple chunks, dried cranberries, candied pecans, grilled chicken chunks, and either blue cheese or feta. I could clearly see the packet of pomegranate dressing so that took no guessing. Turns out, I was right about the ingredients. And it was blue cheese.

Once I knew what I was aiming for, I was ready to customize for my family.

At the market, I picked up a container of Nature’s Promise Power Blend (Kale, Red Chard, Spinach, Collard, Frisee, Mizuna) because that’s the thing they had that looked the best AND because I needed some for soup I was making earlier in the week. Also about a pound of chicken breasts, and a bag of Diamond Salty Sweet mixed nuts (which was the closest I could find at my market to candied nuts of any kind- I've made my own before but didn't feel like it this time).

I already had feta at home (my family doesn’t care for blue cheese, so I went with the feta), as well as a Pink Lady apple, and some Bolthouse Raspberry Balsamic dressing.

It was so simple to bring together.

I heated my grill pan on the stove (it was POURING outside when I made this, so grill pan indoors it was!) on high heat for 3 minutes.

While it preheated, I pounded 2 chicken breasts to an even thickness (about 1/2”) and seasoned with salt, pepper, garlic powder, and All-Purpose Seasoning blend. 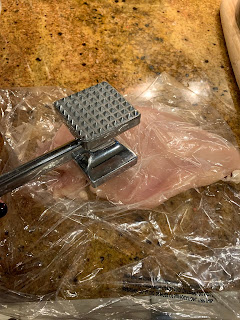 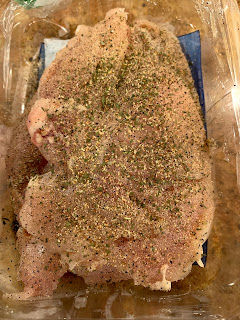 After the pan was preheated, I added 1 Tablespoon of olive oil, then placed my chicken flat on the pan. I let it cook, undisturbed, for 5 minutes. 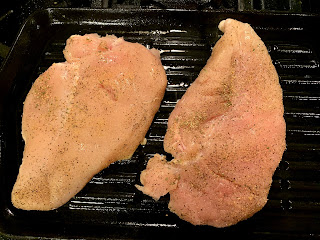 Then I flipped it and it cooked, undisturbed, for another 5 ½ minutes. Then I turned off the heat and let it rest on the hot pan for 5 more minutes. 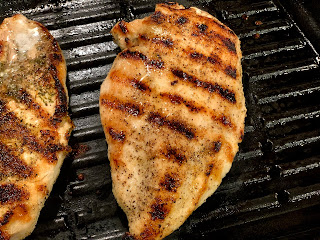 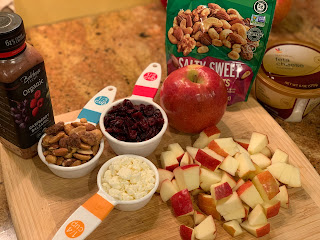 When the chicken was finished resting, I moved it to a cutting board and sliced it, then cut the slices into chunks. 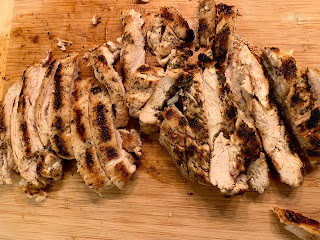 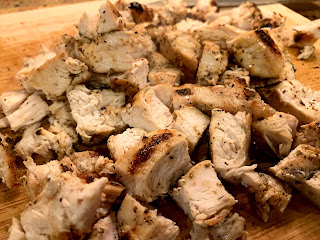 Here’s what my salad looked like. Isn’t it gorgeous? 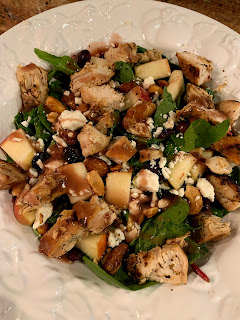 But for the rest of the family, because my kids always tend to eat more when I let them serve themselves, I made the salad family style. (Though, sorry, I neglected to photograph that setup.) I put the greens in a large, flat bowl and pushed them off to one side. I added the cut apple to some of the empty space, and then placed the measuring cups (of cheese, nuts, and Craisins) as photoed above into the leftover space. I also put the cutting board with the cubed chicken in the center of the table next to the greens bowl. Everyone helped themselves (with tongs) and further customized their salads.
My husband used shredded parmesan instead of the feta; my younger daughter used regular balsamic vinaigrette instead of the amazing raspberry stuff; my older daughter used no dressing at all. (She even started making what she called "parmesan lettuce tacos.") But we all happily munched away and remarked on how brilliant an idea this salad was!

No wonder my bestie and her beau are so obsessed!

It was really delicious.