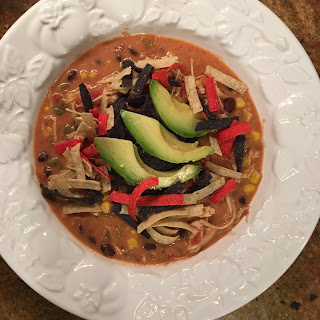 Halloween is almost upon us (which means we only have a few more days of posts for our month-long countdown). I'm posting this recipe today because I think it's the perfect option for your Halloween night dinner.

If you have kids (especially young ones), there's a good bet your day will involve a Halloween parade or two during the afternoon, which means rushing around, struggling to park, standing in a crowd to get a look at your kid for 4 seconds, then repeating the process in reverse. (If you're unlucky like I am, it also means a trip to the dentist. Oh, the horror!!!) Once the kids get home, they'll start in on the nagging, and be all, "Is it time to Trick or Treat yet?" and you'll be all, "No! We don't do that until it starts getting dark." And they'll be all, "How about now?" And you'll be all, "We have to eat dinner first. Cool your jets or you won't go out at all..." You know the drill.

Anyway, my point is, there's enough going on each 31st of October that you don't need another thing--like worrying about some involved dinner--on your to-do list.

This is great because it's predominantly a dump and go recipe (not one of those fake-easy slow cooker meals where you have to pre-brown your meat or side-prep a roux as a thickener.) Besides chopping up an onion and green pepper (which I usually do the night before so it's one more thing to dump in), this one is as easy as opening (okay, kind of a lot of) cans and pouring them in your slow cooker over raw chicken.
Then you get to go about your day while dinner cooks itself. And you can feel accomplished because you've sent your kids out on the town with bellies full of protein and veggies. (Which they'll fill the rest of the way with, you know, candy.)

This is one of my favorite savory recipes from Sally's Baking Addiction. I've made it several times and it's always a hit. Plus, it makes great leftovers for lunches or so forth. She calls hers My Favorite Slow Cooker Chicken Chili, so I guess that's really what this is. But I've got to be honest, it reminds me more of chicken tortilla soup (especially if, like me, you garnish it with avocado and tortilla strips). So when I make it and my girls ask, "What's for dinner tonight?" that's what I say we're having. Which is why that's also what I'm calling it on here.

I'm not going to take the time to retype the recipe in this post. Just go over to Sally's blog and follow her directions. That's what I do whenever I make this.

I'll just throw out a few of my own I've-made-this-many-times tips before you begin.
1. In an effort to save more time the morning-of, I pre-chop my veggies (onion, peppers) and store them in my fridge overnight. Sometimes I pre-measure my spices, too, so I can just dump them in in the morning.)

2. Though I usually use the fresh, I've subbed jarred jalapenos with fine results. (I happened to have a jalapeno from my own garden this time, so I used fresh and chopped it with my other vegs in advance. PSA: when chopping jalapenos, wear gloves or put baggies on your hands. If you get a particularly spicy jalp, as we used to call them when I worked at TGI Fridays, the coverage can protect your skin so you don't, say, touch your face with fire hands. Also? After using any utensils for jalapeno work, be sure to put them right into the dishwasher. Trust me on that.)

4. When it's time to add the cream cheese, it disperses better if it's slightly softened. Sometimes I leave it on the counter for an hour before adding it. If I forget to do that or if I'm not home, I have microwaved it for about 15 seconds. I even like to add some of the cooking liquid to the cream cheese and whisk it in a separate bowl until it's smooth, THEN add it back into the pot already melted. (That's what I do in the photos below.)

5. I like to serve it with tortilla strips on top. (Because, as I said, it reminds me of tortilla soup.)
Whether you call this tortilla soup like me or chicken chili like Sally, it doesn't really matter. Just be sure to make it. Your slow-cooker will be the trick, and the easy, tasty, hearty dinner will be a treat for everyone!
Posted by Natalie M at 12:35 PM