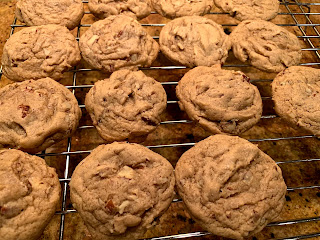 There I was sitting at my kitchen table, browsing through magazines and cookbooks and my substantial Pinterest folder, seeking contenders for this month. In no time, I had a substantial list – one I even broke down into categories: weekday dinners, soups, lunchbox options, sweets. (As will likely surprise no one, my sweets category was the longest. Still, the title of this month is tricks and TREATS so there’s that!)

When I counted my list, I was shocked to discover 31 things on it! How ideal! I could stop searching and be satisfied with what I’d already selected. I was patting myself on the back for how perfect and meant-to-be this list was, how easily it all came together. Oh, I’m such a pro this time! I let the feeling flow through me.

Until the next morning when I noticed my favorite food blogger Sally (of Sally’s Baking Addiction) had posted a new cookie recipe. (You can head on over to her delightful blog for the recipe.) 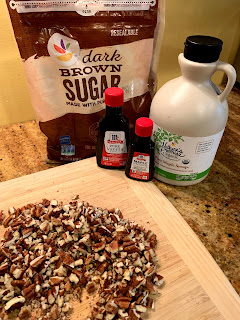 And I was immediately all… well, damn, something from my “perfect” list just got bumped.

Because ain’t no way these cookies weren’t getting a spot in the lineup.

Not only did they earn a spot, they moved pretty darn close to the top of my list. They were one of the first things I made.

The dough came together quickly and easily because it’s pretty standard cookie-making procedure: Mix the dry ingredients together and set aside. Cream the butter and sugar (brown, in this case), then add the eggs, then the vanilla & maple extracts and the maple syrup, and beat. Then add the flour, and finally fold in the pecans. Doneso. Batter up!
Oh, now seems like a solid time to mention that when it says “maple syrup,” it means REAL maple syrup, the nectar of Vermont, the golden sap, and NOT—and I can’t stress this enough—the breakfast variety which is actually just flavored corn syrup. They won’t taste the same if you don’t use the real stuff. Also, per Sally, don’t skip the maple extract either. It amps up the maple flavor. If you’re worried it’ll be too maple-y or artificial-tasting, I can assure you on both counts that it is neither. It’s just plain delicious.

The dough needs to chill in the fridge for at least 2 hours to prevent overspreading, so I covered it with Press & Seal and then headed out to Back to School Night. The timing worked out perfectly because when I returned home, my cookie dough was ready to bake.
I used my fave OXO scoop to get uniform 1.5 tablespoons of dough per cookie. Since the dough was chilled as per the directions, they held their shape pretty well and didn’t spread much at all. You can fit 12 per pan. (For my first batch, since I wasn’t sure about the spreading, I only did 8 per pan, and there was ample room remaining after baking, so for the second batch, I added an extra row.) 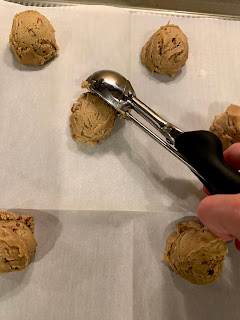 They baked for 12 minutes (edges were golden but centers looked soft and puffed), and then rested on the hot pan for 5 minutes before being removed to wire racks to cool completely. 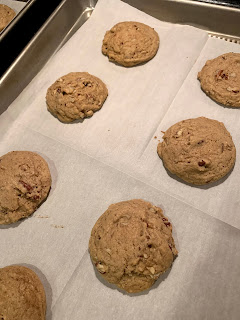 On her blog, Sally includes a recipe for a maple glaze for the tops of these. But after I took one bite of a still-warm one, I decided against the glaze. They’re fabulous on their own. Rich and buttery with a beautiful vanilla maple pecan flavor. (They almost remind me of a butter pecan situation.) The texture, meanwhile, is like a quality chewy chocolate chip cookie. (Did I mention how good they are?!) Maybe I’ll try the glaze next time, but this time, I wanted to leave them alone and I have no regerts. (That Milky Way commercial essentially ruined the phrase no regrets for me because now I can ONLY think of it as “regerts.”) 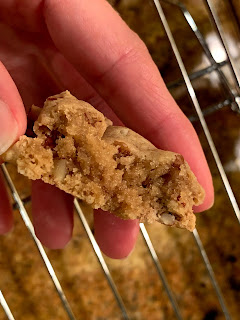 I brought a tray to an appointment I had the next morning, and some more to share at the gym a day later (what? I’m just trying to streamline the consume--burn process for people. It’s a service!) The feedback was all positive. One taster even said, “Wow. These are amazing. One of the best cookies I’ve had in a really long time.”

I’d say that more than justifies the last-second switch-in, don’t you?
Posted by Natalie M at 12:43 PM