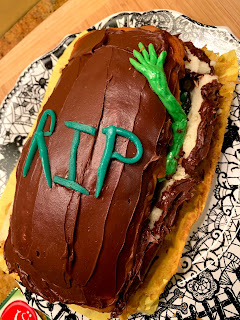 I originally had another recipe scheduled for today, but I decided we really needed to amp up the Halloween for this final week. Enter: today's sugar bombs.

On Sunday, I shared chili in a coffin. That made use of a corn bread base baked up in a loaf pan. The loaf was then partially hollowed out and filled with soup.

The next night as I was trying to fall asleep, I thought, "Hmm...that coffin was kind of cool. What if I did it with cake and filled it with candy instead? That could be fun."

Perhaps you're thinking, "Wait a sec. You've already done a coffin. This is cheating." And perhaps you'd be right. But also? I think this dessert one made better use of the concept because it's sort of like a Halloween piñata cake, but in a loaf pan. (Ever hear of a piñata cake? Here's a fun tutorial.) It's basically a partly hollowed out cake with candy in the middle that spills out when you cut it. You know, like a piñata spills out candy when you hit it.

I'm happy I tried it. My kids were HUUUUGE fans of it. (And why wouldn't they be? It's cake with candy. Sugar on sugar.)

So let's take you through this in a photo tutorial. (I apologize in advance that the pix are sort of dark. I made this on a rainy night and despite having all my kitchen lights on, it was dark and shadowy. Hopefully, though, because it's a scary tombstone, it's more on theme...um, riiiiiight. Ha!)
As you can see, I didn't work from the center. When I removed that first little piece, a crack formed in the corner of the perimeter. Eventually, that broke. This is why you should start in the center (so you can better approach the outsides) AND why you need to leave a thicker border to begin with. LEARN FROM MY MISTAKES!

This is the point at which the structural integrity of my coffin started becoming a real problem. The weight of the candy pushing against the already-flimsy sides cracked the cake on one side. I tried using toothpick "nails" again to no avail. So that's why you need a thicker edge to begin with. Trust me on that!

To serve, you can slice right on through in vertical chunks (IF you didn't used the waxed paper lining). I sliced the coffin lid into 3 portions and served those up, then let my girls help themselves to the candy. The bottom section can be its own portion since so much of it has been hollowed out.

Speaking of that cake you took out... I even have a plan for that.  It's called OPERATION CAKE POPS. I got 4 good sized pops, plus 1 tasting-sized portion for the cook. They come together in a snap.

There! That's TWO Halloween desserts in one post and from only one store-bought loaf cake. This is semi-homemade at its best. Anyone could do this and have quite a lot of fun with it. (Both making it AND eating it, come to think of it.) I hope you'll give it a try.
Posted by Natalie M at 12:06 PM