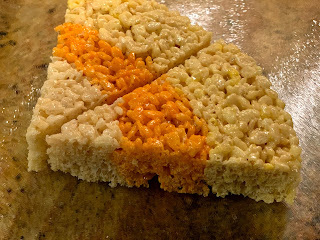 Do you like marshmallow cereal treats (aka Kellogg's Rice Krispies Treats or, as I call them, RCTs- because, brand name or no, I refuse to think of the word “crispy” being misspelled with a K!)?

What am I saying!? Of COURSE you do. Everyone does. Because they’re so delightful in their simplicity. Buttery and sweet and chewy and crunchy…what’s not to love?

I found this recipe on the Glorious Treats blog. I tweaked it because some of the ratios of the original recipe didn’t quite make sense to me, but I was happy to have had the source material as a jumping off point. I also used slightly bigger pans, and cut my treats smaller because 1 treat is good, but 2 is better. (Yes, I know 2 is equal to 1, but it’s a sensory thing. Hahaha.) Finally, I made mine on the stove like I always do because that’s how I roll. 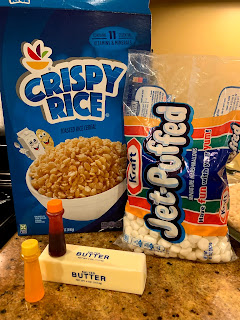 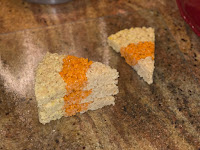 For your hands
At least 1 Tablespoon of butter

Spray two 9” cake pans with non-stick spray and set aside. 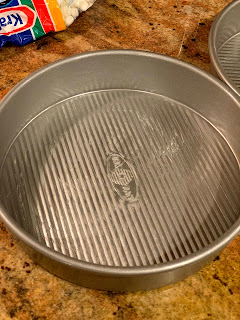 Melt 3 Tablespoons butter in a large pot over medium-low heat. When melted, add marshmallows and stir constantly until melted. 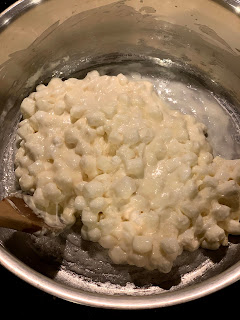 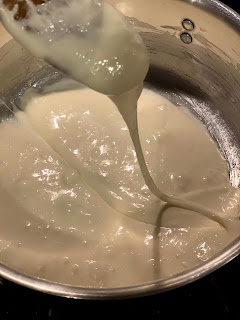 Remove from heat. Stir in food coloring. (I used 7 drops of yellow gel coloring. That wasn’t really enough. It looked like it was enough when I stirred it, but it didn’t end up being sufficient. I’d suggest adding at least ½ teaspoon.) 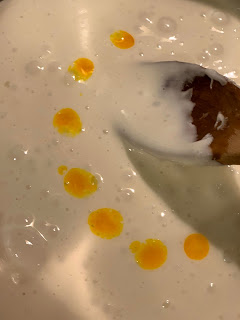 Add the cereal to the marshmallow, and stir.
*Note: in this photo, you’ll see I added the marshmallow to the cereal (because I was trying to follow the method of the source material.) That seemed completely counterproductive to me as all it did was add an extra step and dirty an extra bowl, and even wasted more of the melted marshmallow and sticky, coated cereal. After the yellow layer, I reverted to my normal method which is much better. 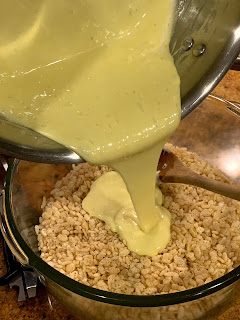 Add half the yellow mixture into each of the round cake pans, then use your buttered hands to form a ring around the outside edge of the pan. Press firmly and work quickly because things harden up as they cool. Aim for about 1”- 1 ½” wide.

Wash and dry your supplies—pot and spoon—and repeat the process twice more. First, with the orange ring and then (after one more wash and dry) with the un-tinted “white” center. 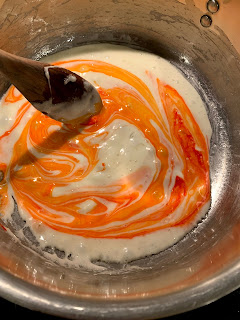 Allow to cool fully so that it sets, at least 30 minutes.

To cut: flip out of pan (it should release with relative ease- you may need to slide the tip of a straight edge between the pan and treat to get it started) onto a cutting board. Cut the large round in half, then into quarters, then cut each quarter in half, and finally each eighth in half one last time to make sixteen. 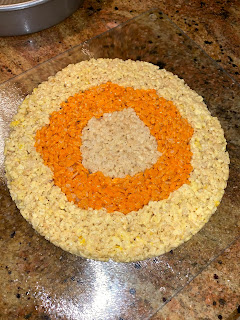 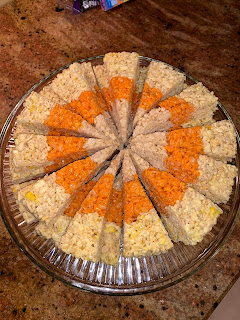 And there you have it! A festive spin on a classic treat.

When I caught my older daughter stealing one from the sideboard and I asked what she was doing, she said, “Just having my favorite kind of candy corn!” Can’t argue with that.
Posted by Natalie M at 9:16 AM