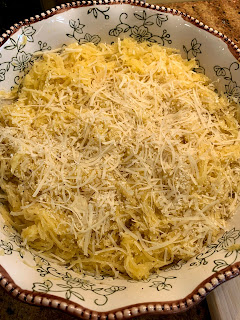 That apple pie I posted the other day got me thinking about Thanksgiving which got me thinking of all the tasty side dishes I’m responsible for bringing each year. One of them is spaghetti squash. I've been making it for years. It couldn’t be easier, but everyone goes wild for it. I always end up feeling like a squash hero. (In the squash world, that's a big deal.)

Spaghetti squash is such a great side dish – for a holiday or really ANY time, especially when it’s in season in the fall/winter months. In fact, it can even serve in lieu of actual spaghetti in your favorite pasta dish. (I’ve made spaghetti squash “lasagna” boats and They. Were. Amazing.)

Let me show you how easy it is to make this delicious side. (As you'll see, my photos show 2 squash. However, the measurements I list below are for 1 squash. Multiply as needed depending on the number of squash you're using.)

Some tips to get you started:

1.     When choosing squash, aim for medium sized ones no greater than 3 pounds each. It just helps control your cook time.
2.     If you’re cooking more than one squash at once, aim to choose squash of the same general size, so they cook in the same amount of time.
3.     When cutting squash in half—if the skin is too tough to cut (you DO need a little muscle sometimes to break through) you can microwave the entire squash for 5 minutes. That brief microwave blast softens it just enough to make it through the skin.
4.     Pay attention to your squash as it cooks. If you overcook your squash, it’ll come out in mushy clumps instead of strands. If you undercook it, it won’t release its “strands” in the spaghetti shape.

Cut squash in half lengthwise. Remove seeds (scrape out with a spoon.) 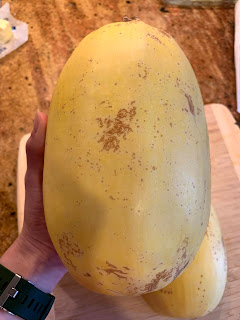 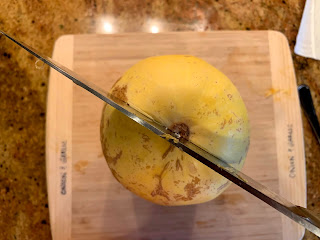 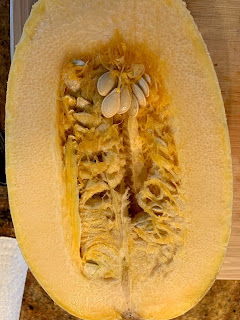 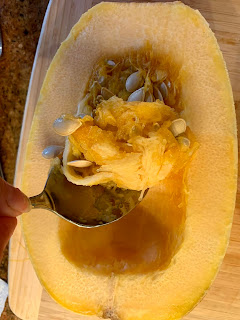 Prick the hard shell all over with a fork, then place, cut-side down, in a baking pan. 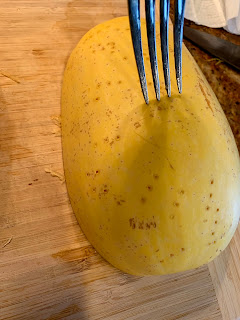 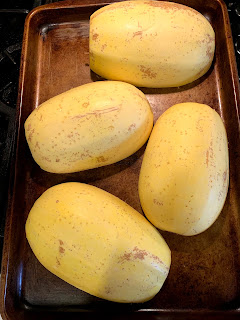 Cook 25-45 minutes or until insides are tender, but not overcooked. (You want a fork inserted in the fleshy part to go in easily but it shouldn’t be mushy.) The cook time can vary greatly based on the size of the squash so you’ll want to start checking it around 25 minutes. 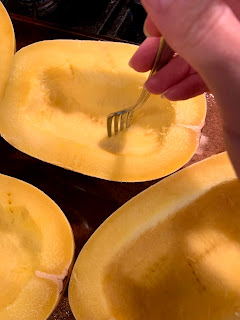 When the squash is ready, remove from the oven and allow to cool, flesh side up, 5-10 minutes.

Hold one half of the squash at a time (if it’s still too hot to hold, use a towel to grip) and use a fork to scrape the flesh into a bowl. All you have to do is run the fork vertically down the squash and it should release in long, spaghetti-like strands. 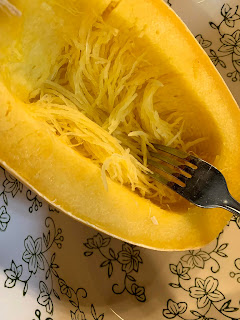 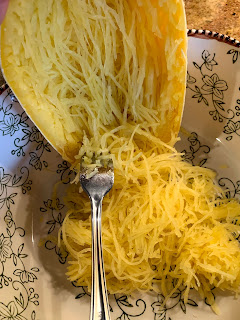 Add half the butter, cheese, salt, pepper and toss to coat the strands. 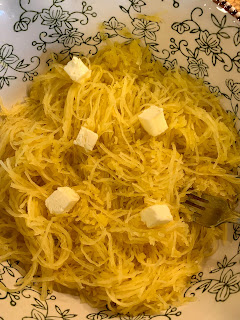 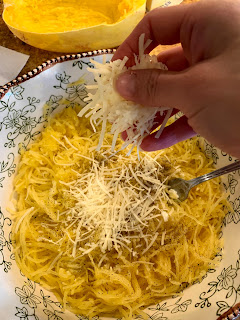 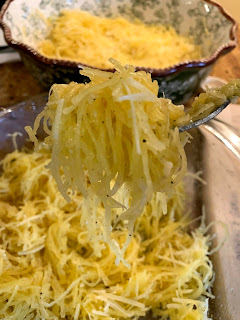 Repeat the process with the other half of the squash, shredding, topping, and tossing. (I like to season each half on its own to ensure that the butter, cheese, and salt and pepper are evenly distributed. When I do this for a large gathering, I use 2 or 3 squashes, but still scrape and season them in layers, one half squash at a time.)

This dish can be prepared a day in advance and microwaved until warmed through. (Be sure to stir it every 5 minutes or so.) I’ve also kept this in a crock put during a buffet style meal. The longer it stays in there, though, the less distinct the strands become since it gets a bit mushy as it continues to cook, but it still tastes good.

Bring this to your next gathering (or just make it at home on a Thursday) and you, too, will be a squash hero. Promise.
Posted by Natalie M at 8:00 AM