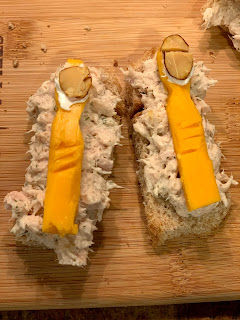 I still mostly make my girls’ lunches each day (I do it the night before to save time in the morning) and sometimes I like to put fun surprises in there for them. Especially this time of year. (When I was in high school and made my own lunches, I remember my mom would occasionally sneak silly things in there for me. I’d reach in for my sandwich and find a little baggie with a single olive on which was scrawled a message in Sharpie: “Olive you!” One day I got the olive AND an uncracked walnut, with the note attached reading “…but you’re a nut!” Good memories.)

The other day I surprised them with these knuckle sandwiches.

I’d seen these “finger sandwiches” in one of my old Taste of Home magazines. But my kids don’t really like cream cheese smeared on bread (and I discovered at the last minute that I was out of carrots because I’d used them in fake-Thanksgiving the day before) so I made a few changes.

I chose tuna as the bread topping (my girls looooove tuna) and cheese sticks as the fingers. From there, it was a quick process.

I sliced the bread into strips and made open-faced tuna sammies. 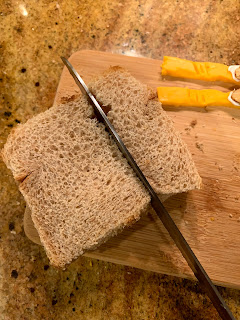 Then I sliced the cheese sticks in half lengthwise so I’d get two “fingers” per stick. 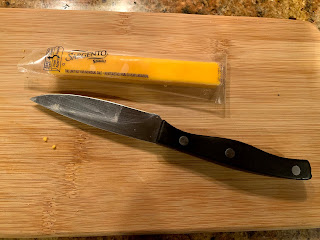 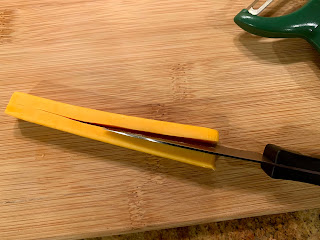 Using a paring knife, I trimmed the cheese so it vaguely resembled a finger. Be sure to put the “knuckle” marks mid-finger. (I made 2 shorter fingers and left 2 full length because the inspiration sandwiches used longer carrots, but I was partial to the look of the “fingers” flush with the bread versus the ones sticking out longer. That’s up to you.) 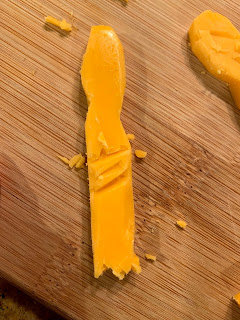 I cut an almond in half (because I’d also recently used up and not yet replenished my sliced almond stock) and attached it to the top area of the cheese stick “finger” with a small smear of cream cheese. 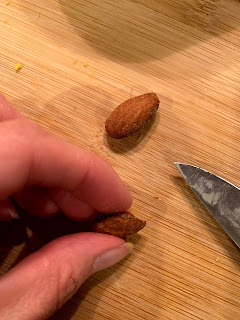 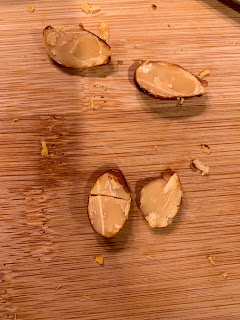 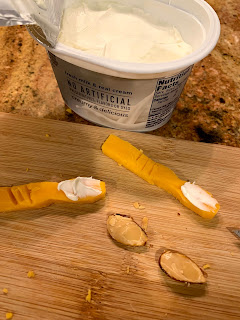 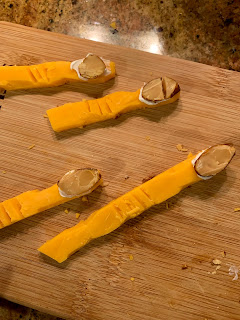 I laid the finger across the top of the tuna and voila! They’re called “knuckle sandwiches” because my husband jokingly called them that and it made me chuckle. 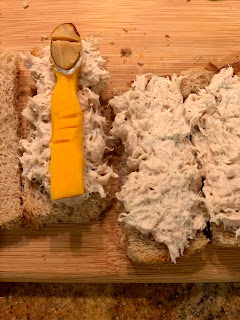 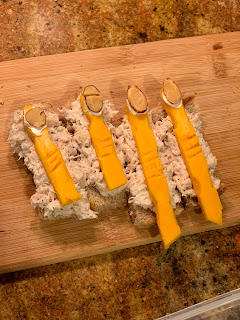 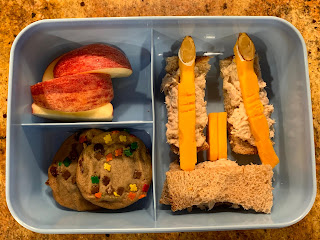 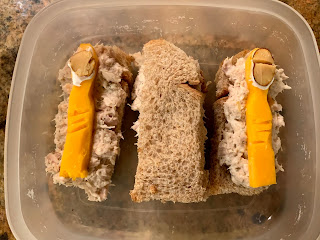 The best part is this little trick didn’t take much longer than it would have to make a regular tuna sandwich. Plus, I know it gave the girls a smile the same way my mom’s bits of silliness always did for me. Nice treat.
Posted by Natalie M at 8:00 AM