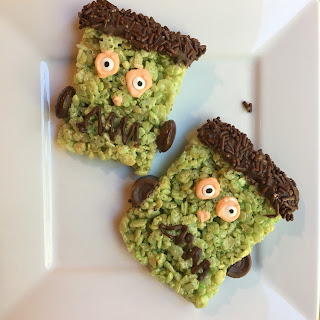 It's Friday! Frankenface Friday to be exact.  Because, you know, alliteration.

I hadn't originally planned to make these treats yet. I'd planned to do them a bit closer to Halloween. However, I had to shift them up because of the fame of the pumpkin cupcakes.

See, remember yesterday when I said I brought some to my gym and the lady took my picture and posted it on Facebook? Well, apparently that photo got around. My husband attended a meeting Wednesday night and a few of the people there had seen the picture and wanted to know if he'd brought them a cupcake. (He hadn't, though some months ago I sent them chocolate cupcakes topped with a decadent vanilla butter cream and they were a hit.) As it were, since I hadn't yet delivered the cupcakes I'd set aside for the people at Starbucks, I told him he could take them to his Thursday meeting. (He did, and they got rave reviews, naturally. That's not me being immodest. It's just that there's no way to eat those cupcakes and not salivate. It's a damned good recipe, people!)

Anyway, I felt bad for the hardworking baristas who didn't get the treat I'd intended for them (that they didn't even know about...) Thus, I made a new treat so I could bring it over. True, these Frankenfaces are tres adorbs (in fact, I find that treats decorated to look like Frankenstein always look so cute! See?), but flavor-wise, they're no pumpkin spice cupcake. (Still, the Starbucks peeps have already been the recipients of these and these, so they're not doing too badly.)

It starts with a classic batch of Rice Krispies treats, but the magic comes from the decoration.

If you've never made Rice Krispies treats before, the process is quite simple. Melt 4 Tablespoons of butter in a pot over low to medium heat. Once the butter is melted, pour in a bag of mini marshmallows.

Stir constantly with a wooden spoon until the marshmallows melt down to form a marshmallow goo. (In case you didn't know, that's technical cooking jargon right there.) 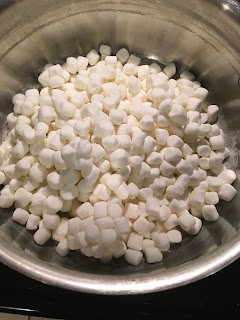 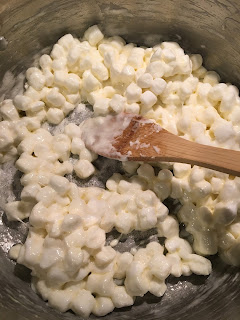 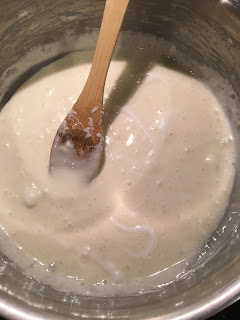 Turn off the heat and add 6 to 7 cups of crispy rice cereal. I usually add seven, but I'm pretty sure my mom only does six. (I think it's a personal choice dependent upon your preferred marshmallow-to-cereal ratio.) Then stir until all the cereal is coated in marshmallow. Pour into a buttered 9x13 dish and allow to set for 15 minutes before cutting.

Now, in this recipe, I added a step prior to stirring in my cereal.

I tinted my marshmallow green by adding about a teaspoon of green gel food coloring into the melted marshmallow (again, that was prior to adding the cereal.) If you find, as I did, that you aren't satisfied with the level of green you achieve, you can squeeze a bit more tint onto the cereal-marshmallow mixture while it's still in the pot. Just be sure to keep stirring with a wooden spoon so your food coloring disperses. 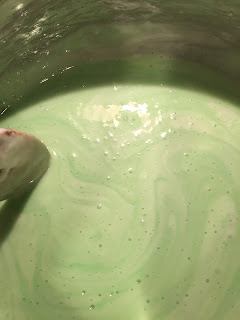 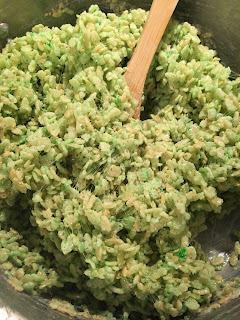 As I indicated above, for a standard batch of RCT's as I call them (I refuse to call them RKTs because I don't condone the purposeful misspelling of words, even in the case of brand names. Crispy is spelled with a C, thankyouverymuch!) I would pour the contents of the pot into a buttered 9 x 13 dish. However, for these, I decided to use a 15 x 10 pan so that I would get a larger yield and a flatter Frankenface. 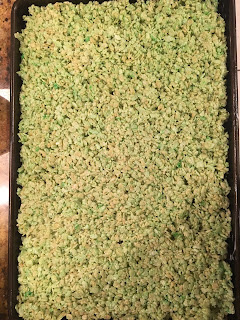 They were perfectly workable, but also a teensy bit flatter than I'd envisioned. In future runs, I might increase my recipe by half or just use the 9 x 13 dish. But again, that is a preference thing.

I gave them about 10 minutes to set up in the pan as they cooled down. Then I cut them into 3.5" x 2.5" rectangles. (FYI: when you decorate, hold them so that the taller side runs up and down.) 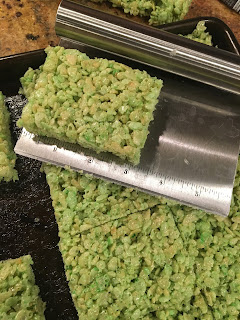 I suggest organizing your decoration into parts. Fully execute each step before moving to the next. (For instance, complete the "hair" step for all of your treats prior to moving to the "bolts" step, and so forth.) It runs more quickly that way.

Melt the chocolate according to package directions and dip the treat into the melted chocolate (about 1/4" to 1/2" deep). While still wet, dip into the brown sprinkles to serve as hair. Set onto a parchment or wax paper lined pan. 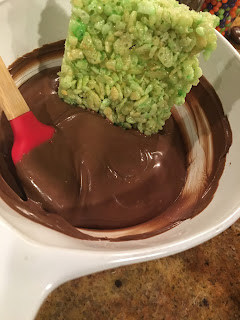 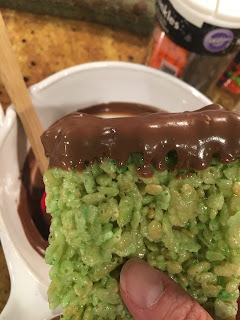 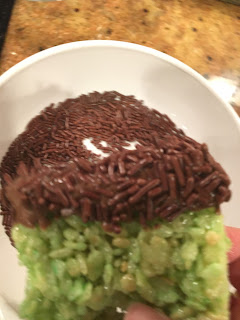 I used two types of candy for this step. I started with the Hershey drops and, when I ran out, switched to the Rolo candies cut in half. (If my treats were thicker, I would have left the Rolo whole. You could use any bolt-shaped candy you prefer or have on hand. I saw one blogger who used mini peanut butter cups. If you check out her post, you'll see our recipes differ, but the concept is similar. Also, she shares a second Rice Krispie option of pumpkins! Fun!)

Dip the flat side of your candy (in my case, it was the caramel side of the Rolo and the side of the drop that said "Hershey") into the melted chocolate. This will act as glue. Gently press the candy on either side of the treat--about 1/2"-1" from the bottom--to serve as the bolts. 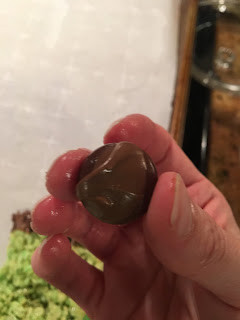 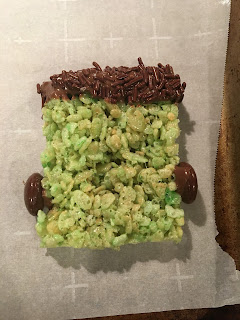 I started off dipping the backs of the candy eyes into a bit of melted chocolate (similar to the "bolt" process) but because the eyeball candies are so tiny, that became a messy job. So I changed course to the step I outline here. You can do either.

Melt the orange and vanilla melts (you could also use all orange or all vanilla) according to package directions. Stir until smooth. Allow to cool slightly. Then scoop into a small sandwich bag. Snip a teeny tiny tip off one corner. (You're crafting another make-shift piping bag here!) Gently squeeze two side by side dollops about a 1/4"-1/2" under the "hair" to serve as eyes. Once you've done this process on all the treats, and while the orange is still tacky, gently place a candy eyeball in the center of the orange blob.


You can probably see in the photos that I started off using a black decorating icing for this part. However, I couldn't control how it was coming out of the bag. (It would start out smooth and then a glob would come out. That got annoying.) So after I did about three that way, I aborted mission and made a change. I decided to use the remaining chocolate – – if your leftovers have hardened up at this point, simply re-melt it – – and place into a sandwich bag when it's still smooth but also slightly cooled. (Otherwise, you'll burn your hand while you hold the bag to squeeze on the chocolate.) Snip off another tiny tip from one corner and gently draw a jagged line for the mouth.
(Optional) Step 5: THE NOSE and/or THE SCAR

If desired – and if you have  leftover orange already in your piping baggie– feel free to squeeze a small dot of orange to stand in as a nose. I added small round candies as a nose on a couple of mine, but I thought they looked silly so I reverted to the piped nose. In addition, you could also use leftover chocolate to draw a scar on Frank's cheek. (I didn't do that this time.) 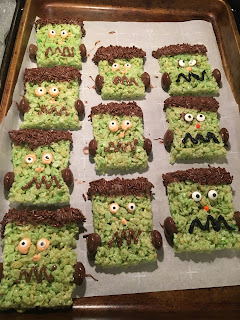 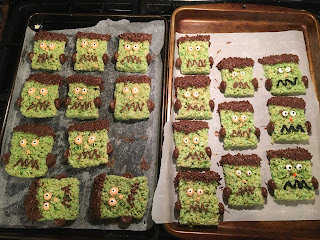 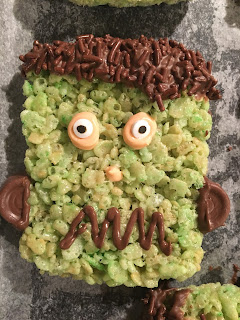 So there you have it: a freakishly fun Frankenstein flight of fancy for this fantastic Friday. Farewell, friends!