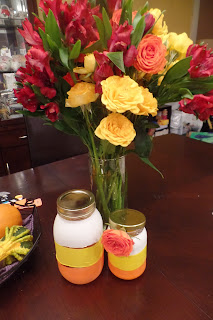 When I come up with a plan in my head, I get uber enthused about it and want to immediately get everything I need to take that idea from just a plan to a reality. I've always been this way. When I was assigned research projects in high school and college, I would head to the library on the first day and spend hours finding and signing out all the materials I needed for it. When I read a review for a book that sounds interesting, or I'm researching a topic for something I'm writing (most recently, flower arranging), I go online right away and check to see if my library has the book and, often, have it brought in from another library. (Sometimes, in my eagerness, I'll go out and buy it for too much money.) This summer, I saw a fun looking fairy garden craft I wanted to do with the girls and we spent the whole afternoon traveling here and there getting the necessary supplies to do it. And when I was planning this month's activities, I went to AC Moore and the dollar store and the dollar bin at Target and the supermarket and bought a ton of supplies so they'd be here when it was time to create.

Sounds all well and good on the surface, right? But guess what? After I race out and get all the stuff, I'm spent from that burst of excitement and action. The research books would sit on my desk until a day or two before the paper was due. The book I special-ordered stays on my nightstand, unread, until I get the notice from the library that it's due in 3 days. The fairy garden supplies are sitting in my garage and probably will until my husband wants to get rid of them since they're "in the way." And there's 3 bags sitting in my kitchen filled with supplies and I'm looking at the calendar seeing I have about 11 more days to use up my stock...

Don't get me wrong. I wrote quality papers. I read the books all the way through (and tried one of the techniques I learned to arrange the flowers in the photo above). I'll make a kick-ass fairy garden (no way I'll let my husband throw out those supplies!) And I'll use these supplies in fun ways.

Just, you know, after the mad scramble to come in ahead of deadline. I don't know why. It's just how I roll.

Anyone else like this?? Surely I'm not the only one... anyone? Hel---loooooo?

Anyhoo, last night I peeked through one of the AC Moore bags and found the mason jars I'd bought to make today's craft that I pinned a month ago after seeing it on the Brit + Co blog. It looked like something my girls would enjoy making.

While it *was* a straightforward little project, it was a bit challenging, especially for little hands. For one thing, the large mason jars we used were too big. Don't get the large kind. Because I was curious, I found a smaller jar later and tried it again with that. It worked better. Definitely go with smaller jars.

But here's how this comes together.

Supplies (for each jar-- simply multiply for additional quantities)

mason jar (medium size, like a jam jar, works best. We used large ones on our first go and had difficulty stretching the balloons around it, and my kids couldn't get the balloons on their own at all)
3 latex balloons (1 each orange, yellow, and white)
scissors 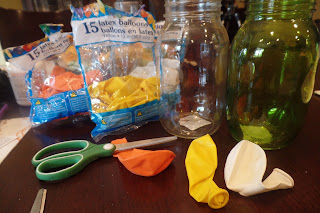 1. Cut off the neck part of each balloon (right at the spot where the round part moves into the part you'd blow up.) 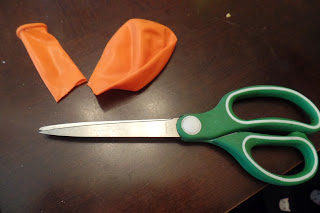 2. Snip off the tip of the rounded part of each balloon. (NOTE: The original post recommends only cutting the yellow and white balloons at this step. The reason is because the orange balloon is supposed to slip onto the bottom of the jar and slightly up the sides. If you use medium-sized mason jars, this works (although it's still a bit of a struggle getting it on there). But for the large jars that I used, we had to cut the tip off so that the orange balloon would come up over the side to meet the yellow balloon in the center. I'd suggest trying the orange balloon uncut to begin and if it fits, great. If not, don't be scared to cut it as pictured in this step.) 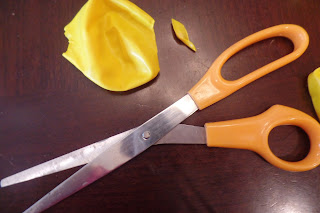 3. Starting at the top of the jar, stretch the white balloon over the rim of the jar and set it in place to about a third of the way down the bottle. (The original post shows someone demonstrating this step, but my hands were full pulling and twisting and stretching... I couldn't get a picture of me doing it.) Do your best to get it straight--unlike mine which is clearly lopsided. ha. 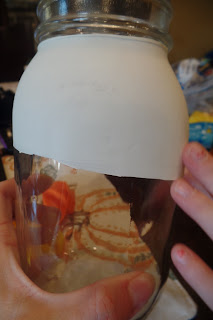 4. Repeat the process in Step 3 with the yellow balloon. You'll have to work a bit harder to get it in place in the middle of the jar. (Not gonna lie--it was sort of a pain.) Do your best to line up the yellow along the edge of the white. There might be some overlap or even some gap. There shouldn't be, mind you, but there might be. 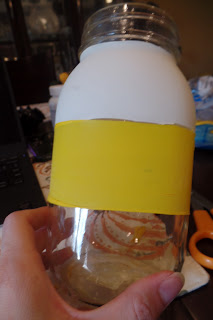 5. For the bottom third of the jar, you'll be working your way up from the bottom instead of down from the top. Because there's no slender part of the jar (as you had on the first two parts), this last segment is a challenge. You may need to enlist a second pair of hands to help you stretch that balloon over the bottom and up the sides to meet the yellow. Again, as I noted in Step 2, this is when you may find that you need to snip the tip off the orange balloon if your jar is too wide or if it won't stay in place. (Even when I used the smaller jar, it took several tries for the orange balloon not to snap off.) 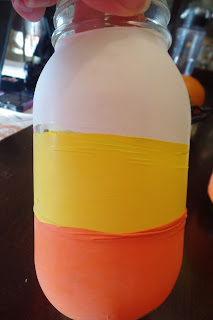 And there you have it: candy corn jars.

These are our (kind of messy) original efforts with the too-large jars. 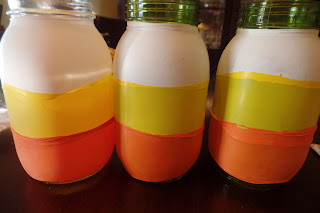 As you can see, the smaller jar works a lot better in every way. The large jar looks a bit like fat guy in a little coat. (haha. Tommy Boy classic!) 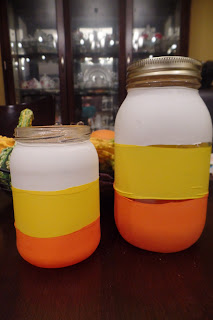 Honestly, I'm most excited with the flowers. Let's look at those again from different angles, shall we? 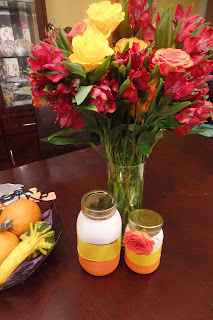 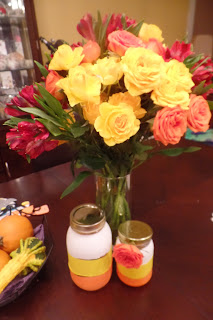