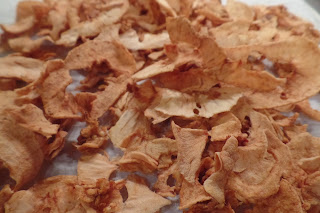 Well, friends, we're nearing the end of our month of tricks and treats. The fun isn't over yet, of course, but there's only a week remaining. That's right. If you haven't gone out and bought your Halloween candy yet, now is the time. And if you volunteered to make something for your kid's Halloween party next Monday...I've got you covered.

I'll be making Frankenstein brownies for my younger daughter's class (at least, that's the plan, barring any unforeseen baking crises) and spider lollipops for my older daughter's class. (At my kids' school, there are guidelines for party foods. Each class is allowed 1 baked good, 1-2 crunchy snacks, 2-3 healthy snacks, water to drink, and 2 non-food items. I wanted to do the baked good for both, but it was already taken which is why I jumped on the lollipop craft situation. Oy.)

Enough about the future! Let's switch gears to discuss today's trick instead.

Brace yourself: I'm about to tell you something that may shock you. Ready? I have tons of apples left.

I know, I know...I don't understand it either since I feel like I've made a hundred apple recipes!

But they're still in there, like a Mary Poppins-esque carpetbag filled with apples.

Worse, though, is that they're starting to go bad. I've thrown out two or three in as many days that have rotted from the inside. Sad face. Which means I need to use up these apples before I have to toss any more of them. The pressure!....of a name....(that's a Pretty Woman movie quote but it's NSFW so I'm not linking to it.)

Luckily, it just so happens there's a recipe called Apple Cinnamon Energy Bites that I've wanted to try for weeks now. The reason I haven't featured it yet is because one of the main ingredients is dried apples (not freeze-dried). I could have bought some at the market, but how can I justify buying apples when I have so many apples?! Obvi, I need to make my own dried apples. I'd planned to do it last week but it's kind of a time-consuming process so I put it off.

There's no more time to put it off, though. I've gotta dry these apples or they'll be unusable!

So here's how to dry apples (without a dehydrator). You can use them in recipes like the one above--as I will be doing--or you can eat them plain like apple chips. I made some last year. Mmm.

As you can see from the photo, I picked a bunch of ugly-looking apples for this process. Since we're drying them out and they're already slightly shriveled, I'd say this is a perfect use for them. 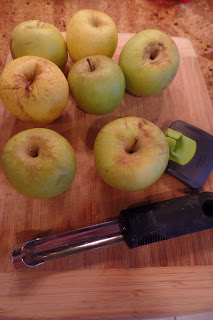 I peeled and cored mine, but that's an optional step. I'm not a big fan of dried skin and that center area near the core always pokes my mouth or gets caught like popcorn kernels in my teeth, and I hate that. But that's a preference thing. 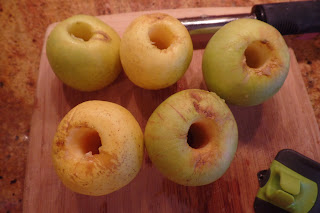 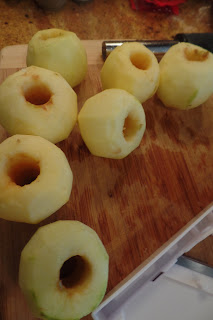 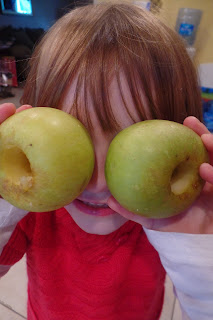 Then I used a mandolin slicer to quickly cut very thin slices of apple. You could do this by hand, of course, but it would take longer. 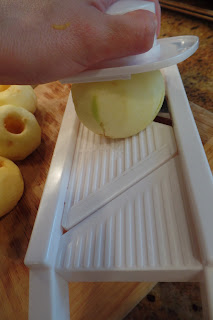 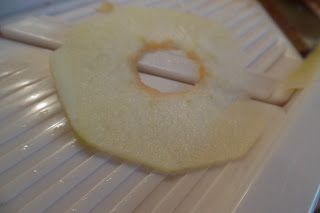 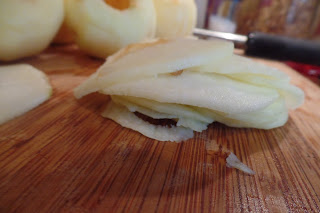 I read a "recipe" online that suggested soaking the apple slices for 30 minutes in lemon water (to help prevent browning.) But, honestly, I don't think I'd bother about that step in the future since it actually added another step (having to dry them), slowed down my progress (could've put them in the oven 30 minutes sooner), and seems pointless (they turn brown during the baking process anyway.) 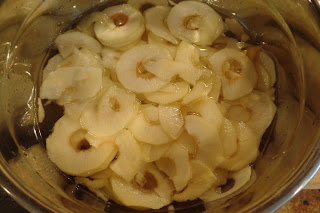 Preheat your oven to 200 degrees. Dry the apples as much as possible. Lay apples in a single layer on parchment-lined baking sheets. 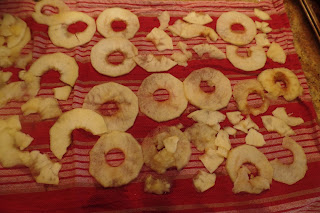 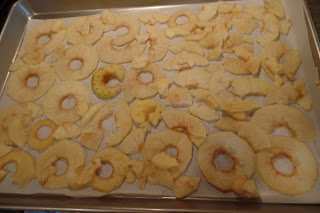 Cook for 1 hour. Remove from oven, flip apples, then return to the oven for another hour (for soft apples) or two hours (for crunchier apples). 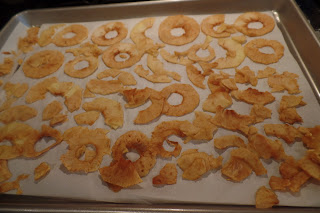 Then turn off the oven but leave them in there for 1-2 more hours.

When you take them out, you will marvel that the three trays of apple slices made from 7 medium-sized apples has shriveled down to less than a pan's worth. 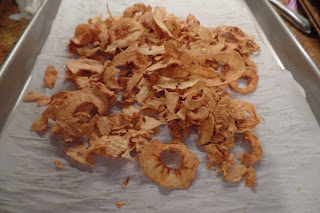 But they're quite tasty. And I look forward to putting them into those energy bites soon.