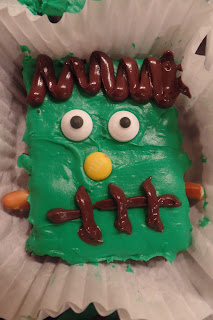 Things have been busy busy busy up in here today with last-minute Halloween prep combined with regular getting-ready-for-the-school-week prep. Basically, whosoever decided Halloween should fall on a Monday this year needs a swift kick in the pants!

Tonight for dinner I made the Halloween pasta I bought several weeks ago from HomeGoods. The pasta is in the shape of bats, spiders, carved pumpkins, and ghosts. 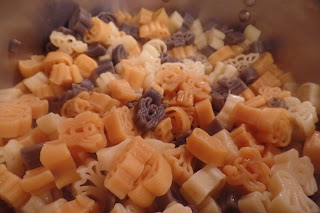 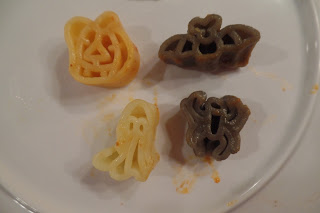 I'd been planning on serving it tomorrow night but decided to switch gears and serve pizza instead since "cooking dinner" doesn't fit on my list of agenda items for tomorrow. I don't know if your schedule is as ridiculous as mine will be since a significant chunk of my day tomorrow is going to be spent driving to and fro between my house and my kids' school. Five round trips, to be exact. INSANITY. Morning drop-off, a return trip for the ten-minute kindergarten parade, another trip to pick up my kindergartner, yet another trip to attend the full-school parade, then the final trip to pick up my third grader. I'm not exactly looking forward to it, but Halloween comes but once a year so I'll deal. I may or may not complain about it all day...

Tomorrow during the first drop off, my daughters will be bringing their treats. I'm sending my 3rd grader with the lollipop bats and ghosts. Thank goodness I did those in advance. I would not have had time to do them tonight since I was busy putting 8 mini braids in my 3rd grader's hair so she's got a little wave in it tomorrow as Hermione Granger. (While I was busy braiding, my husband tied 2 Gryffindor ties--one for Hermione and one for my kindergartner going as Harry Potter.) That same kindergartner will be bringing today's featured treat: the Frankenstein brownies.

I've been excited to make these since I first saw them on the Like Mother Like Daughter blog. For some reason, the Frankenstein treats I make turn out looking the best. These did not disappoint, despite my making a few errors along the way. Luckily, green frosting hides a multitude of sins and Frankenstein is sort of a banged-up dude anyway. So messiness isn't all that big a deal. How convenient!

1. Prepare brownies in a 13x9 pan according to package directions. Allow to cool completely.

2. Spread green frosting on the brownies, then cut them into 20 segments (I did five rows of four) and remove from the pan, placing each into a jumbo cupcake liner. Aim for them to be kind of rectangular in shape.

Note: I made the mistake of removing my brownies from the pan because I thought frosting them in the pan would make them harder to remove. Perhaps this would have been an okay plan had I lined the pan with parchment or foil hanging over the edge for easier removal. But I didn't. Unfortunately, since they're fudgy brownies, they didn't release from the pan the way a cake would. Therefore, I had to take them out in sections and then a few of them broke apart. EEK! I managed to piece them together, but I think frosting them first and then removing them from the pan one at a time would have probably been a better plan. 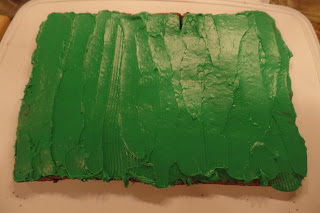 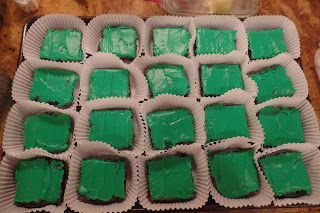 3. Orienting your brownies so that the longer edge is along the side. Then build your face. Add two eyeballs about a third of the way down and a yellow mini M&M under the eyes as the "nose." For the "neck bolts," break a thin pretzel stick in half (I actually broke mine into 4) and insert the pieces into the side of the brownie about a third of the way from the bottom. 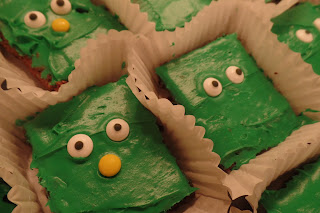 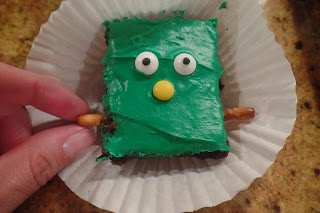 4. Melt your chocolate candy melts according to package instructions and then add to a freezer bag. Snip the tip, then pipe the melted chocolate along the top third of the face as spiky "hair" and in the place of the mouth. I made a straight horizontal line with three vertical lines to serve as both his scar and his mouth. 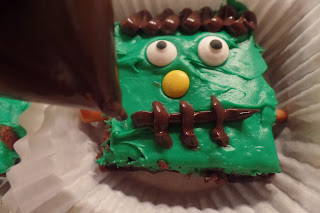 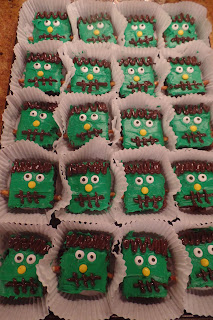 Seriously, how cute are these little guys? So cute. I love how they turned out. I'm sure they'll be a hit at school.

And now, if you'll excuse me, I'm going to sip a caramel apple mimosa and watch Walking Dead. Next time we see each other, it'll be Halloween!!!
Posted by Natalie M at 8:50 PM