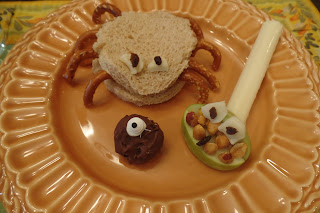 Happy hump day! As it were, I wore my Hump Daaaay t-shirt to bed last night so I was appropriately garbed for today from the onset. Way to stay up to date, I always say. (Well, I don't always say that, but it sounds like something I *would* say, ergo I feel okay typing it here.)

It looks and feels like fall out there today. Thank goodness. The gloom and rain was bringing me down.

I switched up my schedule again with regard to today's treat since I remembered I have a dental appointment. I shouldn't have forgotten it because I began receiving text and email reminders two weeks ago. Perhaps it was more like I selectively forgot about it. In any case, I decided it would be a perfect day to treat my younger daughter to a festive lunch that wouldn't take too much time to get together.

This is a fun one, and adaptable for any kind of sandwich-lunch you prefer. 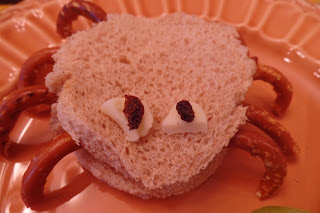 The more I stare at this photo, the more I think he looks a bit like a guilty frog

You can probably figure this out just from looking at the photo, but just in case you need further direction or tips, here's how I did mine.

Use the top of a wide-rimmed glass (or any circle cutter of your choice) to cut your bread into rounds. If you're filling the insides with, say, peanut butter and jelly or fluff or some other spreadable, you can do that after it's cut in the round shape. If, however, you're making a lunch-meat or cheese sandwich, I would suggest cutting the circle after you prepare the sandwich so that all the fillings are also round like the outside.

Next, take eight broken pieces of pretzels and stick those in as legs. (The Thins or Specials sizes work well for these.)

Finally, make the eyes. I used small slices of a stick of string cheese and raisins as his eyes. Other ideas for eyes: chocolate chips, M&Ms, grape slices, carrot rounds. 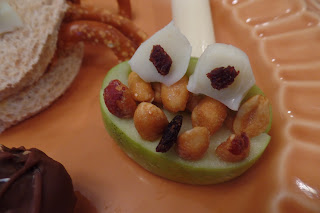 To get some fruit on the plate, I started with a few apple slices. (From our fresh batch of pick-your-own apples!)

I shoved some peanut halves into the apples as teeth. (Other tooth options: almonds, mini marshmallows.) I also spread a bit of peanut butter on one slice of apple (you can sort of see it peaking through behind the top chompers in the photo above) to act as glue (but it didn't really need it). Then I used raisins for a tongue and pupils.

Because I was running short on time but still wanted her to eat the cheese, I stuck the rest of the stick on there and called it a skeleton bone. (Lol.) Another option might be to wrap it up like a reverse-mummy using thin cut strips of deli ham or turkey, then adding eyes using more raisins or even some olives. Like I said, this meal is very adaptable!

And, finally, since those chocolate truffle eyes have been looking good (haha) to my daughter, I stuck one of those on there for her, too.

I made her stay away while I crafted her "secret, special Halloween lunch." 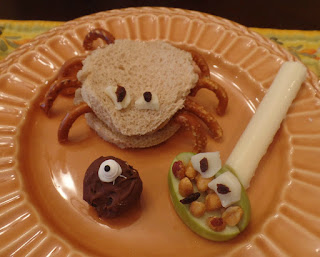 When I set it down in front of her, she giggled.

And as she ate her lunch, she asked, "Inside of the spider, the fluff and the peanut butter--is that his blood?" So, naturally, I had to say yes. Tis the season.