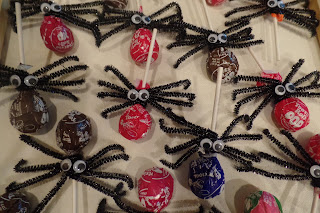 Omigosh, these are too cute.

Even if they are spiders.

I found directions for this clever, easy craft over at One Little Project (at a Time) blog. Though it was the first time I'd ever visited the blog, I'll definitely be going back. I noticed quite a few thumbnails for crafts and so forth that I'd like to try in the future. Good times! And her photographs were nice and clean. (That's one thing I'd definitely love to work on--I know my photos are amateurish at best, and one of the things that makes most of my favorite blogs my faves is their quality photography. Taking a class at some point is on my to-dos! Until then, thanks for bearing with my less-than-WOW pix.)

As I mentioned in yesterday's post, I'll be sending these in with my older daughter for her class Halloween party next Monday. (They're going to be a prize for a game, according to the room parent.) I decided to tackle them this week since I have to save the brownies I'm making for my younger daughter's party until Sunday so they're fresh. Although I'd been disappointed not to be baking for both events, I'm thinking now maybe this was a blessing in disguise.

Technically, the sign-up sheet requested "Lollipop Ghosts." Since I'd been planning to make these spiders this season and I'd already purchased a bag of googly eyes, some black pipe cleaners, and a bag of Tootsie Pops at the dollar store, I jumped on the lollipop concept but said I was going to try the spiders instead. (Turns out, I ended up doing both because I had an odd number of pipe cleaners. Thus, I decided to make 20 spiders and 10 ghosts. Best of both worlds!)  Besides a pair of scissors and a glue gun (though you could use regular glue, too), that's all you need to make these.

1. Start with a lollipop (the size and shape of the Tootsie Pops seems ideal. I feel like a Blow Pop might be too top-heavy and a Dum-Dum would be too small.) and 2 black pipe cleaners. 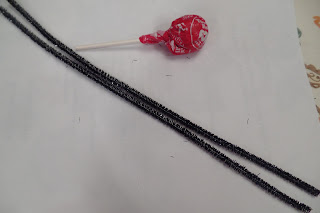 My pipe cleaners are sparkly and plastic--rather than felt--so those little
black specks you can see on the paper there are the plastic shedding.

2. Bend the pipe cleaners in half and cut so you have 4 relatively even pieces. 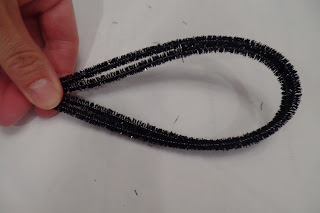 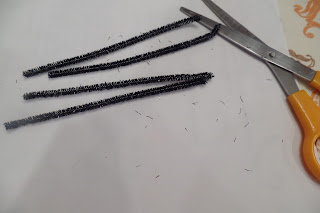 3. Line up the 4 pieces so they're laid out evenly. Then lay your lollipop about a third of the way from the edge, as pictured. (Also? Buy felt pipe cleaners to avoid all the gross shedding!) 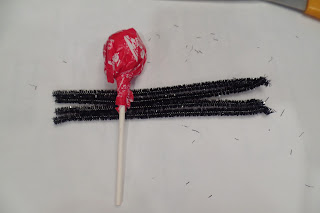 4. Wrap the long end all the way around the lollipop so that it ends on the same side on which it began and both sides are about the same length. (And seriously- buy felt pipe cleaners.) 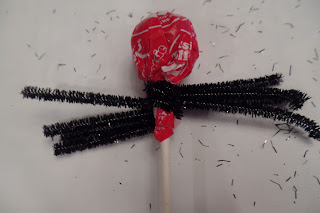 5. Gently splay out each "leg" and gently bend each end downward to make "feet." 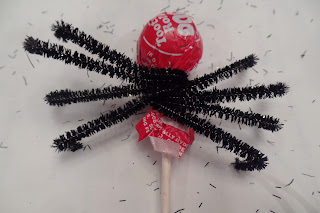 6. Preheat your hot glue gun. (Again, you can use regular glue for this but it will take longer to dry and the eyes may not stay on as well. On the other hand, you won't burn your fingers.) 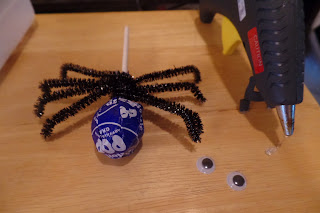 7. Glue two plastic googly eyeballs on the stick side of the spider. 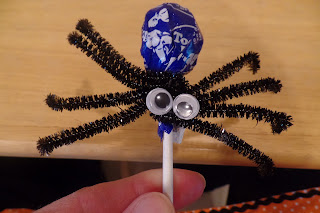 As you can probably tell since I seemingly randomly changed my "example" lollipop from red to blue (oops!), I broke up this task into more than one sitting. Last night (whilst watching clips from Last Week Today with John Oliver and The Tonight Show with Stephen Colbert), I completed steps 1-4. Today, I completed the dangerous part of the task--you know, working with the glue gun. On the bright side, I only burned my fingers 3 times, and the incidents were relatively minor. Hurrah!

I'm really glad with how they came out. 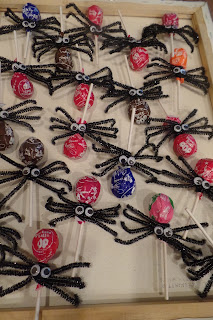 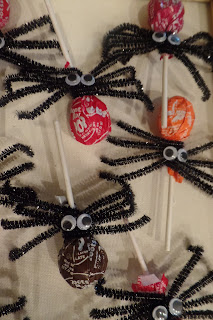 Oh. I almost forgot about the ghosts. While I didn't take step-by-step photos of those, I did snap a picture of one of the finished products. I'm willing to bet you can figure out how to make these without instructions.

But just in case:
1. Take a tissue and wrap it around the bulbous part of the lollipop.
2. Secure the "neck" area with either a ribbon (which would likely look a lot nicer but take longer), a small rubberband, or, if you were making spiders and had an odd number leftover, a pipe cleaner.
3. Use a marker to draw two eyes and a mouth. 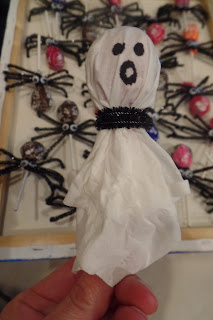 All told, I spent $3 on 30 lollipops, $1 on 40 black pipe cleaners, and $1 on googly eyes, and under an hour to produce these cute little party favors/prizes. Frightfully fun.
Posted by Natalie M at 7:40 PM