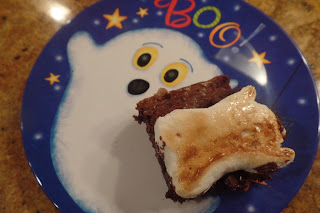 Today has been kind of...strange...so far.

First, I woke up to find it dreary outside. While that's not necessarily an oddity in and of itself (though it is sort of a bummer since I was jonesing for sunshine and blue skies), it certainly made the next weird thing even more eerie. When I went downstairs to start the coffee pot, my two cats preceded me by a few seconds. From the top of the first landing, I heard their paws thumping as they raced to the kitchen and as I made my way to the bottom of the second set of stairs, I heard a hiss. I chuckled to myself because, you know, cats. (Sometimes when these two sisters play, one of them takes things too far and the other issues a warning hiss and that's that. Just like human sisters, come to think of it.) I hit brew and then meandered to the living room where I opened up my laptop. And that's when I heard it.

A strange noise. Kind of like a low growl meets a rumble meets a howl. "Oh no," I thought. "What's wrong with the coffee pot?" I headed into the kitchen to investigate what sounded like a coffee grinder on the fritz, only to realize it wasn't the appliance at all. It was one of the cats!

Shocked, but curious, I watched as my kitty alternately growled, groaned & moaned, and hissed at her sister. Her gaze remained fixed on her "enemy" the whole time.

In the relative darkness, it was downright freaky!

Though I thought they made up--about a half hour later, they approached each other and rubbed faces--I heard another scuffle while I was preparing today's treat, and the caterwauling started up once more.

I hope they make nice soon because MAMA! Cat fights are scary!

Know something else scary? (If scary is delicious...) These s'mores brownies I made today.

I found the idea for these over at the Home is Where the Boat Is blog. They were simple to make--especially because I used a boxed brownie mix--and they're so adorable, too. This is one of two different brownie ideas I'm going to be sharing with you this week since I still have to tackle those Frankenstein ones for Monday's school Halloween party. These would be another fine option for you if you're asked to bake a festive treat. The great thing is you can use your favorite boxed brownie mix or your preferred brownie recipe as the base. The fun comes in decoration.

I made a few modifications to the source recipe based on what I had around and my family's taste preferences, and you can do the same. It's quite versatile.

For the graham cracker crust layer:

1 1/2 cups graham cracker crumbs (I used chocolate graham crackers because I love them. But one sleeve of them only produced slightly more than a cup of crumbs, so I made up the difference with my graham cracker-spiced wafer crumbs.)
1/2 cup (1 stick) butter, melted
(the original recipe also called for 2 Tablespoons of sugar and a pinch of salt. However, because my chocolate graham crackers have a dusting of sugar on the tops AND because the other layers make it plenty sweet, I left out the sugar. I also skipped the salt because I used salted butter as opposed to the unsalted butter recommended in the original recipe)

your favorite brownie mix or recipe - prepared according to package directions

For the marshmallow topper:

1-2 packages of Peeps Ghosts (my package had 9 ghosts- I used them all, but there was a section of my pan that didn't have ghost coverage; but that's how I wanted it)
1/3 cup semi-sweet chocolate chips

2. Pulverize graham crackers in food processor. Meanwhile, melt a stick of butter in the microwave. Combine graham crackers and melted butter and press into an 11x7 pan. (The original recipe called for an 8x8 pan. The author said that size was perfect for laying out 3 rows of 4 ghost Peeps. I laid out my 9 ghosts in an 8x8 pan before starting my recipe but they seemed too squished height-wise and also covered all of the brownies. My older daughter sometimes complains about marshmallows so I didn't want to have a full pan of marshmallow-covered brownies. Thus, the 11x7 pan was perfect for me because the ghosts could stand at their full height and also leave a section of the pan without marshmallow coverage. Depending on how many Peeps you have, you can adjust your pan size accordingly.) 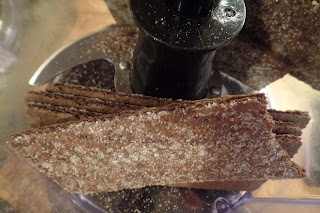 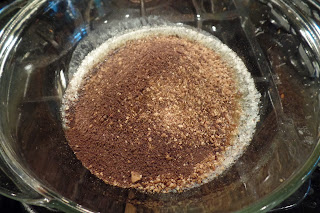 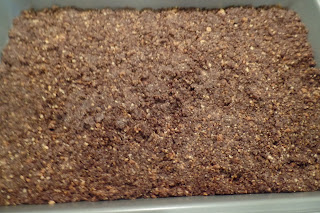 Bake the crumbs for 10 minutes. 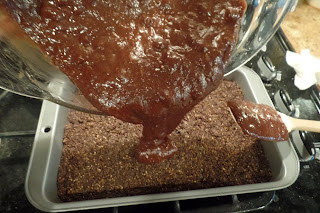 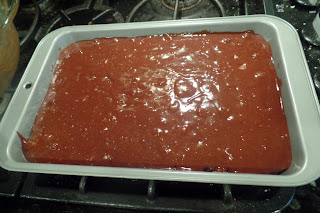 Bake according to package directions.

4. Five (5) minutes before they're done, remove them from the oven and sprinkle chocolate chips on top where you will place your Peeps. They'll melt slightly and then your Peeps have a sticky surface on which to rest. (OR, if you want to skip this step, that's ok. You could also spread a little marshmallow fluff on the bottom of the Peep to act as "glue.") Return to the oven for 5 minutes. 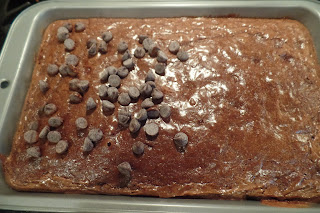 5. While preheating your broiler to Low, place the Peep ghosts on your brownies. 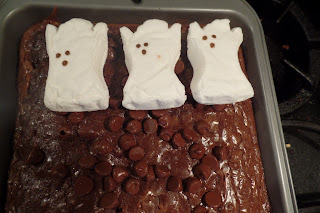 Don't they look like someone just yelled, "HANDS UP!" at them? Lol. 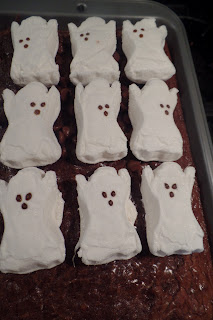 6. Place into the oven under the broiler just until lightly browned and toasty. As the original recipe notes, DON'T WALK AWAY from them. Stay close by and watch them. I even kept the oven door slightly ajar for part of this step so I could monitor their progress. 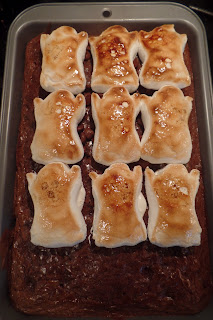 (optional step) As you can see, the little "faces" on these don't stay visible through the broiling process. If it's important to you (it wasn't to me since we're only eating these at home; had I been bringing them to an event, I probably would have done it), press mini chocolate chips into the face area as soon as you remove them from the broiler.

Be careful when you cut them-- the gooey marshmallow can be sticky on the knife.

Oh, and beware of angry cats!