October 31: Chocolate Decorations & Other Ways to Use Up Extra Candy Melts

I'm sitting here on the couch dressed as Harry Potter's teacher, Professor McGonagal, eating a caramel apple and enjoying the calm before the storm. Frankly, I'm exhausted and it's only 4:17.

So far today I've been to and from my kids' school four times (my husband got our daughter at pickup time so that shaved one trip off the expected five trips), banned my younger daughter from eating any more candy, and told my older daughter, no, she can't NOT wear her $25 robe--pretty much the bread & butter of her Hermione costume--tonight when she goes trick or treating. Sigh.

Mmm. That apple was good, but now my teeth hurt. Waaaa.

Anyway, let's do a post because pretty soon I have to get up and throw some frozen pizzas in the oven before the trick or treating commences.

Today I'm going to give you a few ideas of what you what you can do with candy melts if you ever happen to melt way more than you need. I do that quite frequently when melting things down for piping on decoration, though not as often when melting things for dipping. In general, it's better to have too much than not enough, especially since stopping midway through decorating is a pain and slows things down a ton and, in some cases, can even ruin a final product. That said, having a lot leftover can be a bummer in its own way because throwing it out is wasteful.

So here's how to NOT throw it out.

Option 1: Chocolate-cover all the things!

The easiest thing to do is to grab some pretzels or potato chips or cookies and dip them into the melted chocolate.

A second option is for you to make that extra into candy bark. If you go with this option (like I did last night when I melted 6 oz of chocolate to decorate the Frankenstein brownies), your best bet to minimize waste is to leave the bag of chocolate on your counter to harden. Then, when you're ready to deal with it, you can peel away the baggie (yet another reason to always use freezer baggies since they're thicker and won't rip apart IN your chocolate), dump the chocolate into a microwavable dish, re-melt the candy in the microwave, then spread it in a thin layer on a Silpat-lined baking sheet. Press whatever candies you have laying around into the chocolate while it's still wet, then pop into the refrigerator for 10-15 minutes to set. Break apart and--presto--candy! 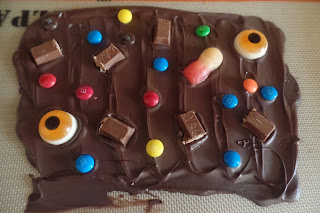 A while back I melted way too much white candy. I decided to make these decorations which can be used on ice cream sundaes, as a hot cocoa topper, or even as a decoration on top of, say, a pancake. Heck, you can even eat them plain. 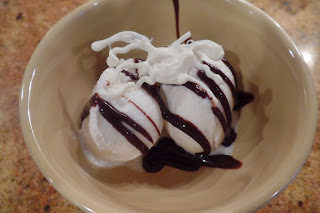 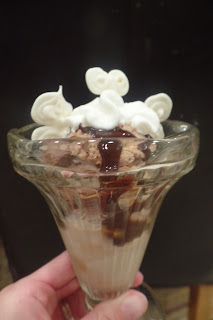 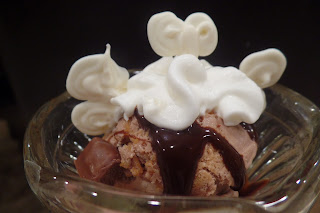 To make them... start with your baggie full of candy melt. Set a piece of waxed paper or parchment on the counter. 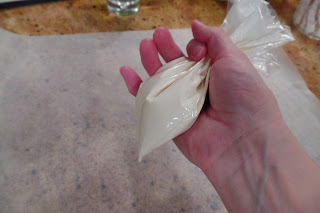 Pipe shapes, free hand, onto the paper. Keep in mind that the more intricate the design (like the thin spider webs or spider legs), the more likely it is to break. The thicker ones (like ghosts and bones and witch's hats) stay in tact better. Let sit on counter to set. 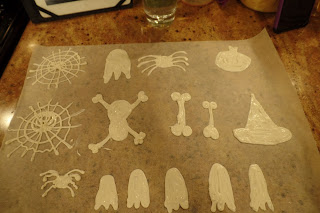 Once set, cut the paper so there's one shape per paper. 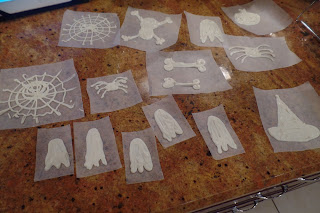 When ready to use, you can peel away the candy from the paper. 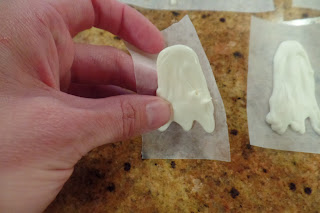 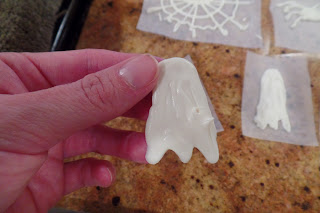 Stack extras in an airtight container to use as needed. 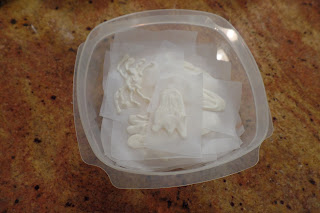 Happy Halloween to everyone!
Posted by Natalie M at 5:21 PM