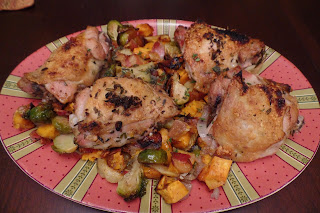 Since it is officially autumn AND today marks the first day of our month of October fun, I thought it fitting to begin this journey (it appears I've been watching too much Bachelorette...) with an autumn-themed dinner. Bonus--it's a one-pan meal. Well, it *can* be if you want to do it like the original. Full dislosure: mine was a 2-pan meal. But that's still pretty great.

I found this gem of a recipe over at Cooking Classy's blog. Jacqueline has provided many a tasty dish option for me over the years (including this soup that is my kids' absolute favorite meal), so I accurately suspected this one would not disappoint.

I made a few modifications based on family preferences, available resources, and recipe commenters (those can be helpful to read in advance of trying recipes, I find, as people occasionally note things they tried which worked well for them or even ask the recipe creator questions about substitutions or the like), but the base recipe was easy to follow and you could follow it to the letter with no trouble.

Here's what I did.

Servings: 4* (depending on how many chicken thighs are in your package)

(the original recipe left the skin on the apples and said skin removal on the sweet potato was optional. I'm not a big fan of cooked apple skin and I knew my kids would balk at the sweet potato skin, so I peeled everything. The choice is yours!) 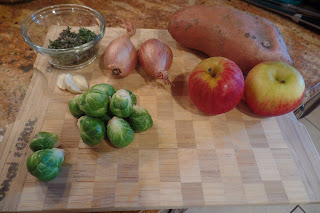 3. In a gallon-sized resealable baggie, combine 2 Tablespoons olive oil, red wine vinegar, minced garlic, and fresh herbs. Add chicken to bag, then seal it (leaving as little air in there as possible) and massage mixture over chicken in an effort to evenly coat each thigh with the herby mixture. Set aside to rest. 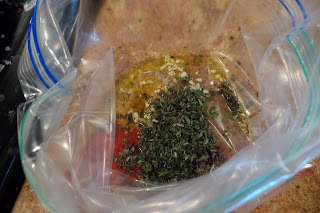 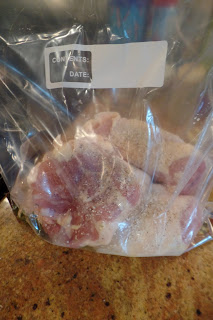 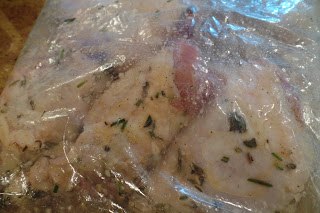 4. Chop sweet potato, apple, Brussels sprouts, and shallots. Place on a large rimmed baking sheet. Drizzle with 2 Tablespoons olive oil and salt and pepper, then toss to evenly coat. Spread into an even layer and set aside. 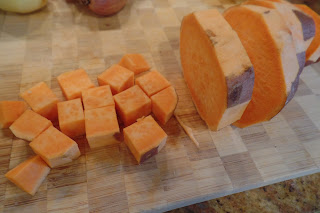 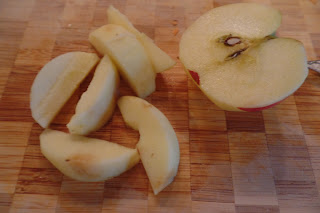 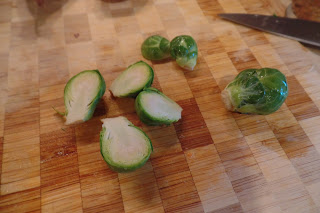 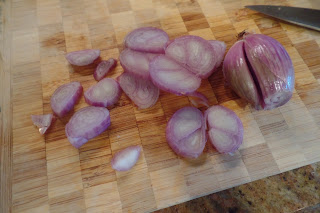 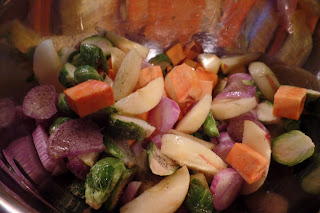 5. (Optional step-- this is where I dirtied the second pan but I felt like it was worth it. Plus, my husband usually does the dishes, so it was EXTRA worth it. haha.) Heat 1 Tablespoon olive oil in a cast iron or aluminum skillet on med-high heat. Pan sear the chicken thighs for 2-4 minutes per side to get a golden crust on the skin. (Discard the juices leftover in the bag.) 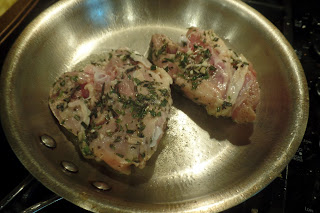 6. Set chicken skin side up over the vegetables on the sheet pan. 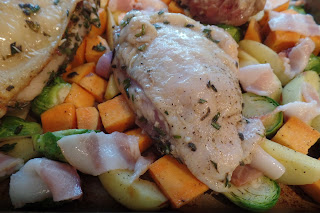 I experimented to see if searing the chicken first was worth my effort. I seared 3 of the 4 thighs
and left one raw so I could compare the end result. The chicken above is the un-seared one. 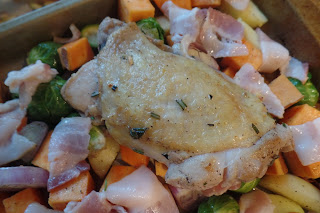 The thigh shown here has been pan-seared to a light brown.
I probably could have even left it on longer.
You can also see the bacon arranged around the chicken as per step 7.

7. Arrange bacon evenly over the vegetables on the pan. Separate any pieces that stick together. 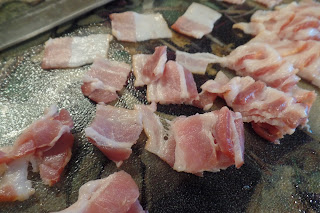 8. Roast about 30 minutes (though mine took closer to 35) in preheated oven, until chicken and vegetables are golden brown and chicken is cooked to 165 degrees in the center. If you didn't pan sear your chicken at the onset, you can broil it during the last few minutes of cooking to get a more crisp, golden chicken skin. (I did end up broiling mine for a few minutes anyway, which is why some of my herbs look charred.) 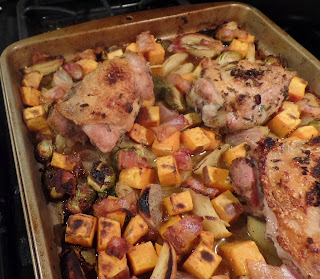 Serve immediately and garnish with additional fresh herbs if desired. 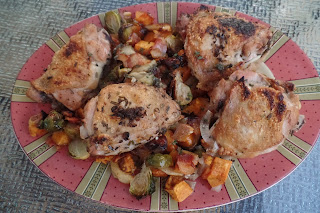 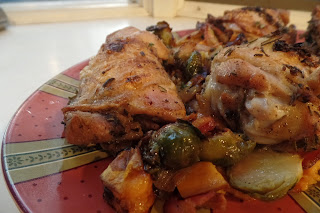 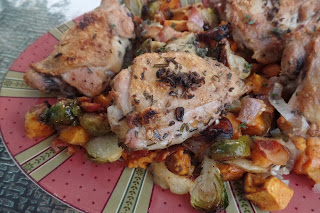 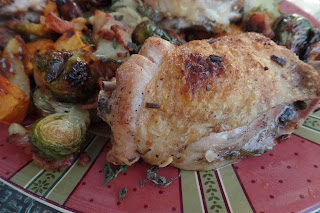 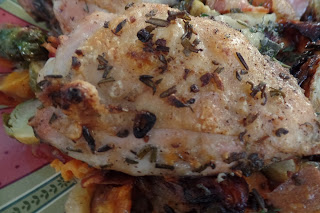 For the record, my husband and I agreed that the thighs that got the pan-sear
ended up with a more satisfying crispy-skin factor.

I found the cook times provided by the source recipe mostly accurate. However, I found the apples a little mushier than I prefer an apple, and a few of the bacon pieces could have gotten crispier. I ended up throwing some of those back into the oven by themselves while I was transferring everything to my serving platter. But that's a preference thing, I suppose.

The star of the show, for me, was the vegetable mixture. There was sweetness from the potato and carmelized shallot, tang from the apple, earthiness from the sprout, and salt from the bacon. Usually I'm not a huge fan of cooked Brussels sprouts (though I enjoy them shaved raw in a salad) or charred things, but the roasting process got such a nice crust on the outside and those ended up being my favorite bites.

This meal is autumn on a plate. Enjoy!
Posted by Natalie M at 8:09 PM