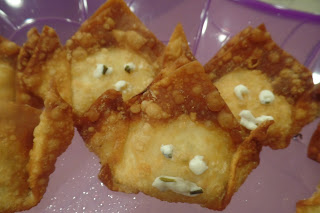 And this year, for our month of Tricks and Treats, Fridays are going to be Halloween Movie Nights. So after dinner and baths, we'll retire to the family room and pop in a Halloween flick and nosh on a festive appetizer and/or drink. It's gonna be delicious. Er, I mean, FUN.

Tonight, I'm trying my hand at a version of these Wonton Bats I found through the First for Women blog. I am going to *attempt* to deep fry them per the recipe, but that's something I almost never do. I don't like the smell of fried oil in my house, and it's simply not at all good for you. (Yes, I know that most of the sugar-laden treats I make aren't exactly health foods, either, but everyone has a line and deep-frying is mine, ok? Thanks.)

I will also, by way of comparison, "oven fry" them (which, essentially, is brushing them lightly with oil and baking them) as per this Spend With Pennies recipe for crab rangoons.
(As of the writing of this paragraph, I have not yet made them. Obvi.)

Usually, my market carries wonton wrappers right in the produce department. However, this week--because I needed them for this recipe--they didn't have them. They were none when I tried getting them with my regular shopping over the weekend, and were still missing yesterday when I made a special trip for them. (They were also out of Kraft caramels which I need for an apple recipe upcoming! Grrr.) So I had to go to Wegmans instead. Naturally, they had them since they have everything. (Actually, that used to be true. Today, the aforementioned Kraft caramels were also missing from there. I had to go to Target where I snagged the last two bags they had. Seriously? Let's restock our caramels, world, shall we?)

Ok, now we're back to real time. And I've made the recipe. It was a success!

The original called for a filling of only the cream cheese. I decided to add some meat to bulk up the filling. I did half chicken and half steak. Feel free to modify per your own tastes.

Here's what I did.

4 oz boneless, skinless chicken breast, cooked and shredded
2 sheets of Steak-um, cooked
8 oz container onion and chive cream cheese, divided
wonton wrappers (they are sold in 16 oz packages; you will not use even close to the whole package) 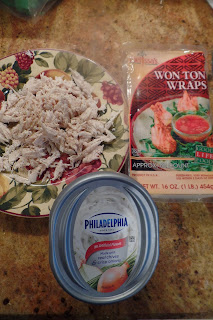 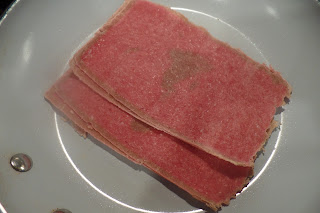 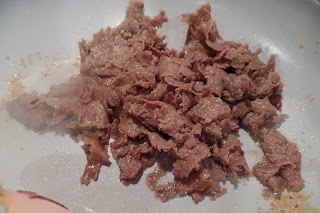 1. Mix half the cream cheese with the cooked, shredded chicken breast. Mix the other half with the steak. 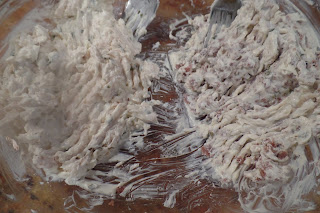 2. Lay out wonton wrappers and scoop 2 teaspoons worth of filling onto the center of each wrapper. (I used my small OXO scoop.) 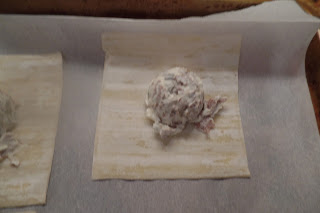 3. Use a pastry brush dipped in water to moisten two edges of the wonton wrapper. 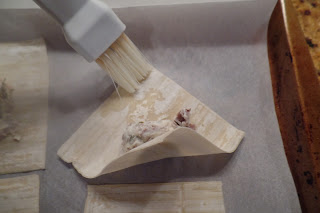 4. Fold up the pointed corners to form a triangle. 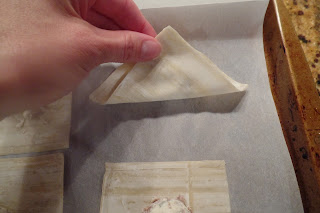 5. Fold up the other two corners so they stick up like wings. (If they flop down, you can brush a little more water in there.) 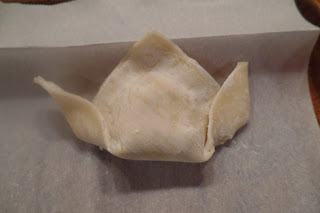 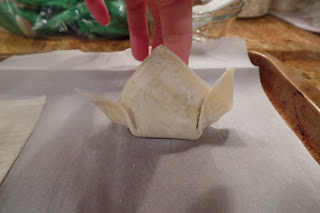 See those green things behind my hand? Gruesome green toes!
6. To fry: Heat 1 inch of oil to 350 degrees over medium high heat. When oil is up to temperature, work in batches (of 4-6 at a time) and gently drop bats into hot oil for 1-2 minutes per side. Flip over when golden and sizzling. Remove and place on paper towels to drain. 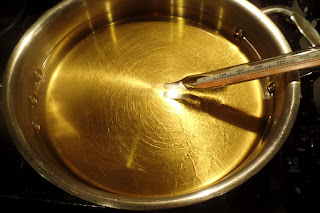 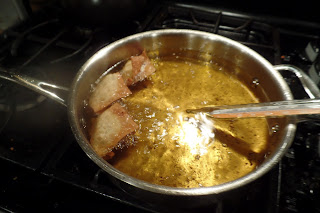 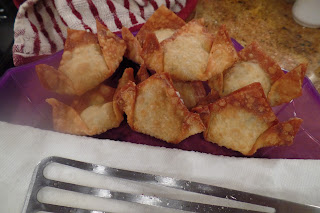 7. To bake: Place wontons on parchment-lined pan. Spray each side with cooking spray, or brush with oil. Preheat oven to 450 degrees. Bake for 12 minutes, flipping at the 6 minute mark. 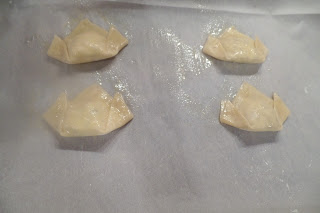 8. (Optional) Add a face. I used my favorite ziplock-baggie technique to pip a bit of cream cheese on as faces. Had I been doing these for an event, I would have used the olives as in the original recipe and made them look more official. I didn't bother about it this time because it was just for us. 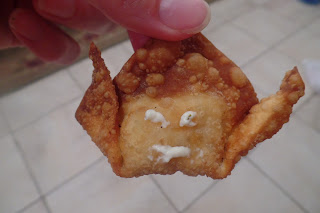 These turned out quite well. Although you can see the baked ones became a bit more browned than is my general preference, they still got a nice crunch on them. If you are looking to save calories or, like me, don't prefer frying things in your house, they were still satisfying. 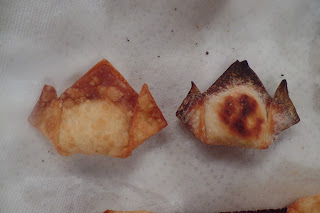 Left: fried; Right: baked
While I enjoyed both kinds, if I had to pick a favorite, I'd say I preferred the chicken ones. My husband voted for the steak ones. My younger daughter liked them both. My older daughter didn't like either (which wasn't a surprise considering she isn't a fan of cream cheese.) And that's kind of how it is at our house. haha.
The bats were a perfect accompaniment to our movie pick tonight: Sleepy Hollow.
﻿
﻿
Posted by Natalie M at 9:21 PM