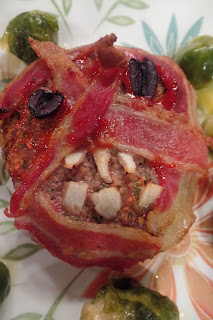 Warning: Today's post is really cool. But it is also kind of labor-intensive (especially if you use my meatloaf recipe -- it's good-for-you but has a lot of steps). I foolishly decided to tackle it on a weeknight when it would have been better on a weekend or on a special occasion. I'd certainly recommend trying it yourself, but maybe plan better than I did. Forewarned is forearmed, after all.

The one I use is healthier for you than your average meatloaf since it's chock full of vegetables, whole grains in the form of oatmeal, an egg white, and lean ground beef. It's from Devin Alexander's Most Decadent Diet Ever cookbook. It's copyrighted and that particular recipe is not available online, so I can't post it on here. But I can still show you the pictures of my process. 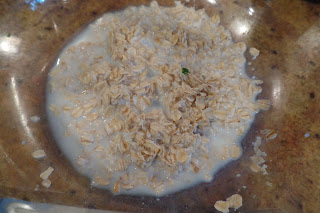 Soaked my old-fashioned oats in some milk 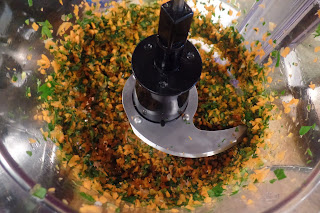 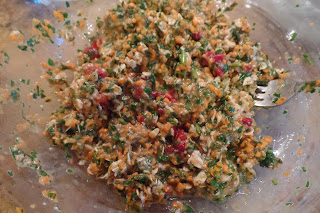 Added the veggies, an egg white, some A1, Worcestershire sauce, salt, and pimentos to the oats 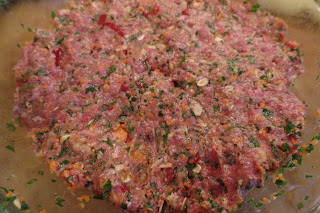 Combined all of that goodness with the meat

After making the meatloaf, I portioned it into four servings and shaped them into the shape of a skull. I placed each skull on a rack placed over a foil-lined pan. (That way, any juices drain under the meatloaves instead of them sitting in it.) 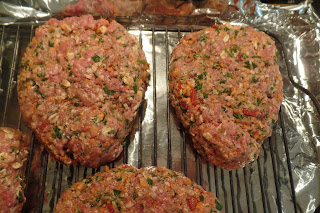 I used bacon as bandages, onions as teeth, and kalamata olive halves as the eye sockets. I wrapped the "heads" with a strip of bacon (I needed a full strip and one quarter-cut width-wise- strip to get around each "head"), then added "bandages" to the face with another half strip of bacon (cut in half width-wise from the full strip and then lengthwise once halved.) placed in a criss-cross shape across the the skull. Then I placed onions as teeth where the mouth should be, and the olives in place where the eyes would go. 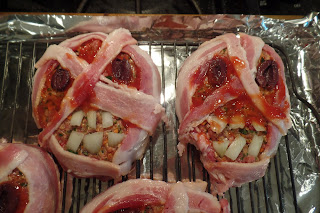 Finally, I painted a bit of ketchup (for both moisture and "bloody" aesthetic) on the "eye" and "nose" areas of the face. 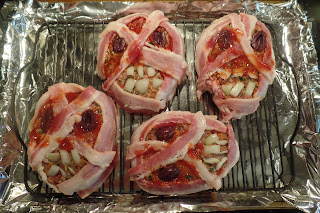 Then I baked it in a 350 degree oven for about 50 minutes. At the end, I bumped up the oven temperature to 375 and gave it another 8 minutes (mostly to firm up the bacon a little more). 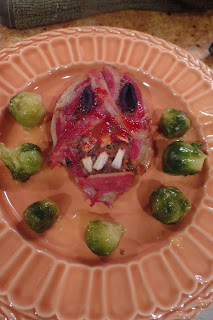 I served these with Brussels sprouts, though I'd been intending to serve them with asparagus. But I, uh, forgot to buy it at the market even though it was on my shopping list and I crossed it out as having bought it! (See, what had happened was...I arrived to the market and since asparagus was on sale, it was right there at the front of the store. Like, RIGHTTHERE when I first walked in. But the stalks were all pencil-thin. So I didn't select any from the display up front because I was hoping the produce section would have some thicker stalk options. And then...I completely forgot all about asparagus. Even, apparently, when I was in the produce section and crossing things off my list and I saw asparagus on there and, for some reason, crossed it off as though it was in my cart even though it wasn't. Perhaps because I bought an avocado and that also begins with an A? I don't know...) 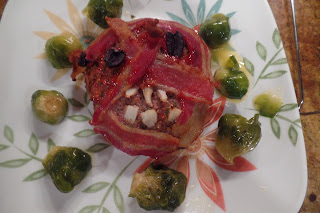 Are they skeletons? Mummies? Zombies? I don't know. They kind of remind me of some sort of shrunken voo doo head situation. Definitely not alive. Thus, dead. Hence my new title "dead head."

But for the season, they're perfect and perfectly fun. And delicious.
Posted by Natalie M at 2:34 PM