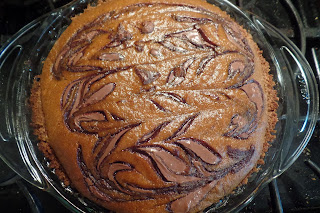 Well, I don't know what it feels like where you live, but where I live it feels like October has itself confused with June. And some people aren't likin' it.

Particularly when those people just switched out everyone's summer clothes with their fall/winter clothes and are now inappropriately garbed for the summer-like temps. Grrr.

Perhaps, like me, you need some short-sleeved shirts up in here, and also need to remind yourself that, in fact, it is still fall. Well, never fear. I've got you covered, for what's more "fall" than pumpkin stuff? (Honestly, I can list 5 or 6 things,  but in our "pumpkin flavor all the things!" society, I feel safe making a pumpkin-forward claim such as that.)

That said, let's bring back the fall, shall we?

Today's main dessert extravaganza comes to you again from Sally's Baking Addiction. This woman is a dessert genius. (Guess what else? She's coming out with a new cookbook and it's gonna be ALL COOKIES. Cookies are my fave, in case you didn't know, so I'm extra excited.) She takes a plain 'ole pumpkin pie and gets all fancy with it by baking it in a gingersnap crust AND swirling creamy Nutella spread right on through it. It's like a pie with brains and beauty! Can't be beat.

But wait...it can. Because I put my own spin on the crust--using regional-favorite Sweetzels Spiced Wafers instead of gingersnap cookies AND combining those crumbs with graham crackers to sweeten things up a bit. Oh my genius! Sometimes I'm goooood. This is one of those times. Trust me.

1 and 1/2 cups Spiced Wafer and graham cracker crumbs (I used one sleeve of the spiced wafers and 5 full graham cracker sheets. That made 2 1/2 cups worth, but it's not so bad having extra because they're tasty on top of ice cream or even as the coating for Nutella truffles (see below for this secondary "recipe")* or, say, as the rim of this apple cider martini. Bottom line: you'll find a use for the extras)
2 Tablespoons sugar
5 Tablespoons butter, melted and slightly cooled

1. Preheat oven to 350 degrees. Spray 9 inch pie dish with nonstick spray and set aside. (The original recipe says you can use an 8" or 9" dish, but after I started with the 8" dish, I ended up switching to the bigger one--in fact, mine is 9.5"--because the cookie crust was too thick for my liking. So the choice is yours.) Set aside.

Fill the bowl of your food processor with a sleeve of cookies and grind until they're crumbs. Add 5 graham crackers to that mixture and do it again. 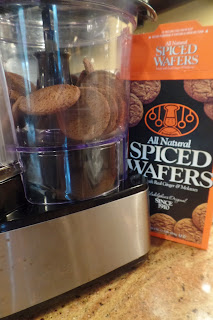 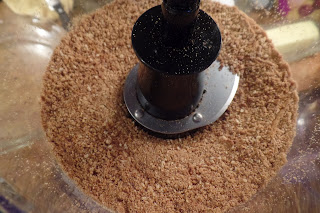 Measure out 1 1/2 cups of the crumb mixture and mix with sugar and melted butter. Take a moment to savor the smell of this mixture which, you'll discover, smells surprisingly like an old-fashioned donut. Mmm. So good. 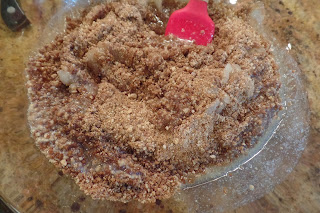 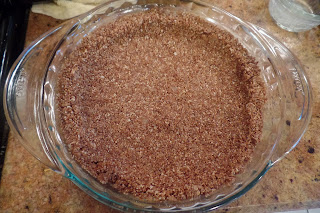 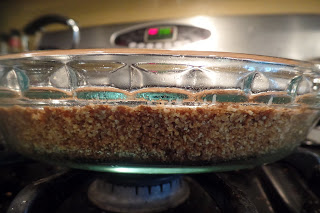 Only go halfway up!

Bake the crust for 10 minutes and then allow to cool slightly before adding the pie filling.

Whisk 3 eggs in a large bowl and then add the remaining ingredients (except for the Nutella), stir to combine, and pour into the pie crust. 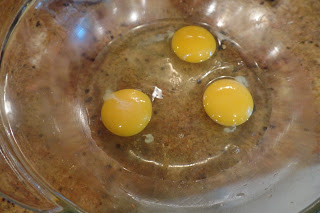 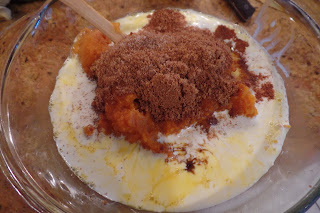 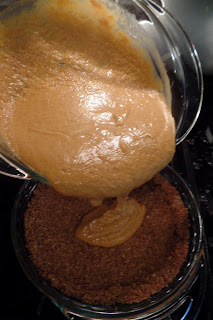 Action shot!
Drop spoonfuls of warm Nutella onto the pie and swirl gently with a knife. 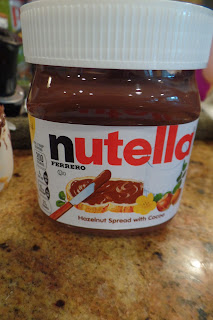 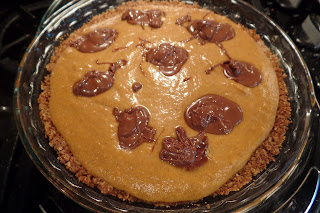 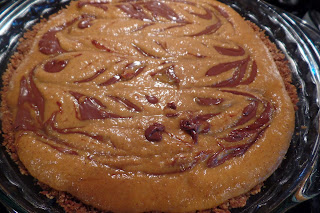 Bake for 40-45 minutes or until the filling is set. The original recipe says the center will still look wet but won't be too jiggly. Mine took closer to 50 minutes. Cool before serving, then store in refrigerator. (For additional tips about storage and freshness or even freezing, check out Sally's blog.) 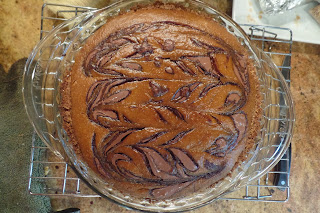 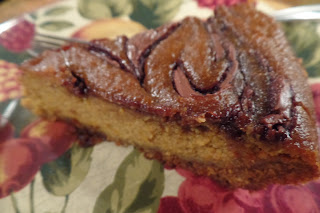 Is it just me or do those swirls look a bit like leaves? It's really a gorgeous pie and it tastes damned good, too. This is Thanksgiving-worthy for sure. Or just hump-day worthy. Because...Wednesday.

*Now, regarding those Nutella truffles I referenced above...I originally measured out my half cup of Nutella--which was about a quarter cup of the end of a Wegmans brand Nutella I had on hand that was on the older side and, as such, had firmed up in some spots, and a quarter cup of a fresh container of Nutella. After measuring it out, I scooped it into a different measuring cup so I could microwave it. It was the measuring cup I'd used for the heavy cream and it still had a film from the cream in there. I put it in the microwave and...it sort of seized up rather than getting drippier and swirl-able. I'm not sure if it was because of the fat from the cream or because of the older, firm chocolate, or both. But of one thing I was sure: I couldn't use it in the pie. However, Nutella ain't cheap, so I wasn't about to throw it away. Thus, I did what any normal person who doesn't want to waste perfectly edible Nutella would do: I used a teaspoon measuring spoon to scoop out blobs of it, rolled it between my hands to form balls, and rolled those balls in some of the leftover crumbs from the pie crust. And PRESTO: Nutella truffles. Turns out, they're my older daughter's new favorite thing. (But she's not keen on the pie). Go figure.

So there you have it. Two desserts from one recipe. (Three if you count the booze.) You're welcome.
Posted by Natalie M at 12:31 PM