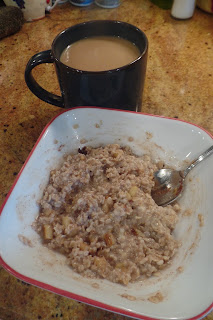 Oatmeal is one of my favorite breakfast options for when I'm in a hurry and want something that will stick with me for a few hours. However, as much as I love some of those easy-to-grab pre-packaged ones (I'm looking at you Peaches and Cream!) they are full of added sugar and salt and artificial colors and flavors.

OMG! I interrupt this post to report that the aforementioned Peaches and Cream oatmeal is NOT EVEN MADE WITH PEACHES! What what what??????????? Those "peaches" are really APPLES that are artificially flavored and colored. For reals! Check out the ingredient list under the Nutrition tab on Quaker's page.Wait! The "strawberries" in the Strawberries and Cream flavor are ALSO apples. And the "blueberries" in the Blueberries and Cream flavor are made from figs and corn syrup and a bunch of other gross sounding stuff! 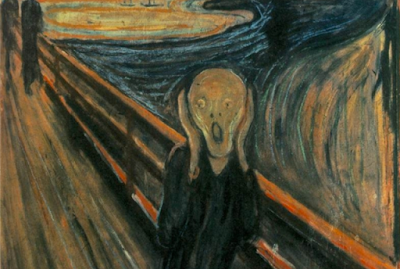 This Munch painting (The Scream) is how I feel right now.
Or maybe THIS version is more accurate...

First it's the bit about the canned pumpkin not actually being pumpkin and now this.  I...I just...can't even with all the lies!

As shocking as this news is on the surface, it shouldn't come as much of a surprise. We really don't know enough of what goes in our food. But this sort of speaks right to the point I was trying to make about the homemade oatmeal. So let's get back on track, shall we?

I was starting to say that when I eat a packet of oatmeal, it doesn't stick with me the same way. It just doesn't. For one thing, there's not enough oatmeal (a serving of the plain stuff is 1/2 cup) and there's too much sugar and there's not enough fruit and the fruit that's in there is dehydrated and sad. So I started making my own.

That's my standard. As you can see, there's virtually no sweetener in there at all. I really don't miss it.

Today, as I stared at my still-overflowing bowl of apples (despite all the apple recipes I've tried in the past week!) and felt a pang of hunger, I thought, "Hmm...I wonder if I could make a tasty apple cinnamon oatmeal with fresh apples." (Spoiler alert: I did.)

I took some inspiration from the apple puff pastry pies apple filling, but cut back some of the butter and sugar. Admittedly, it's still a fair amount of sugar for one bowl of oats (certainly more than I usually use), but it's less than what you'd find in one of those packets and you could cut it back more if it pleases you. 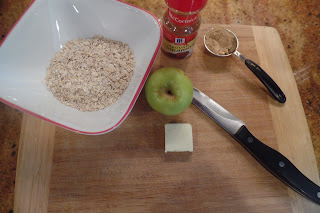 1. Melt butter in small skillet. Add diced apples and cook for 2-3 minutes, stirring often, until apples start to get golden and tender but still have a little bite. 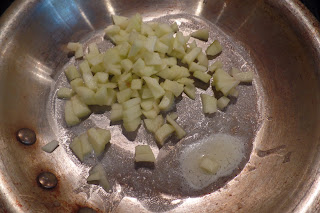 2. Combine oats and milk in a bowl. Microwave for 1 minute, 10 seconds. 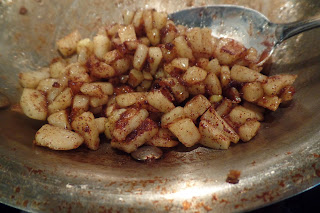 4. Stir remaining brown sugar and cinnamon to the oatmeal. 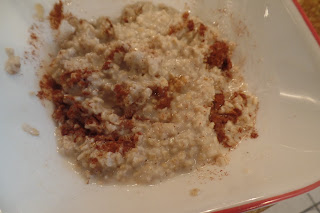 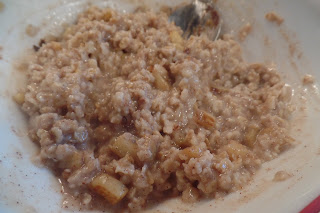 The whole process took about 10 minutes instead of 3, but the flavor payoff was worth it to me. What you have here is a comforting bowl of yum made WITH fresh fruit and a full serving of whole grain oats, but WITHOUT salt, strange additives, and lies.
Posted by Natalie M at 4:51 PM