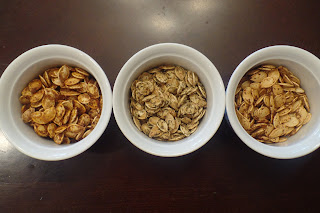 Last night we carved our pumpkins. It was a big mess (as carving pumpkins is wont to be) and lots of fun. In fact, my younger daughter walked around to my side and said, "Mom, I really love doing family projects, and I love our family." That girl is such a little love bug. (She also has a habit of calling in to me from the other room, "Mom?!" I always assume she's going to ask for something but she says, "I love you." It gives me the feels every time.

She was quite intent on doing her own pumpkin this year--and she did a fabulous job cleaning out the gloppy innards. I watched her work diligently, even as I finished cleaning out my own, carved it, and ended up cleaning out my older daughter's pumpkin. But my little one didn't want my help, even when I offered. When she was ready to carve, she was quite miffed that I had to step in and help her with the knife, but I let her direct me and keep her hand with mine, so her final pumpkin was very much her own.

My older daughter was much less interested in cleaning out her pumpkin. She doesn't like getting messy--never did, actually, even as a toddler--and would only touch the gloopy pumpkin stuff a couple times. But after I took over (in an effort to speed things along), she did her own carving. She wanted to do a Harry Potter theme, but that didn't work out, so then she ended up doing her own version of a kitty.

My husband carved his annual grinning jack o' lantern. He pretty much does the same thing every year--he feels strongly that the classic needs to be represented.

As for me? I went political. Because I'm with her. 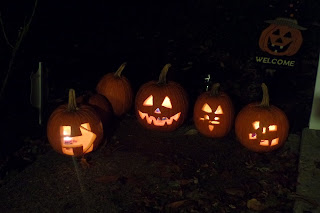 All the mess notwithstanding.

We also tried something new: we reserved some of the seeds so we could try roasting them. I'd intended on roasting them immediately so we could enjoy them whilst carving, but A. there was much too much going on, and B. we were full from all the nachos and dessert nachos.

I washed them last night and laid them out to dry. Then I roasted them today.

I'd planned on using a taco-flavored pumpkin seed recipe I found in Taste of Home (to go in with my nacho night, frankly), but I saw a few more online that sounded intriguing so I tried a few different savory options to see if we had a favorite.

My favorite source - both for flavor inspiration (though, interestingly, I didn't end up making any of hers exactly as written) and roasting recommendations - was the Wholefully blog. She also has great tips for cleaning the seeds. Head on over to her blog and check them out (and check out her other yummy flavor options).

For today, I decided to make Fiery, BBQ, and Parmesan Dill flavors.

Preparing Your Seeds
I rinsed mine in a bowl, then poured them in a strainer and continued rinsing, picking out any clumps of pumpkin goo that stuck to them. Once clean, I poured them onto a clean towel to dry. Then I poured them, mostly dry, onto parchment-lined baking sheets and left them on the counter overnight to dry the rest of the way. (I read on Food Network- linked below- that you should dry your seeds in a 300 degree oven for 30 minutes prior to tossing them with the liquid and seasonings and baking. If you don't have time to do things overnight like I did, try this method. It's said to make crunchier seeds.) 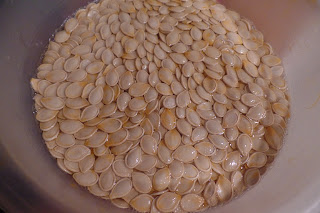 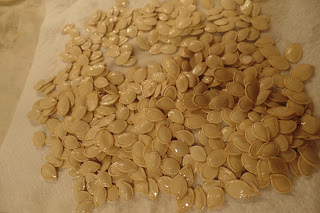 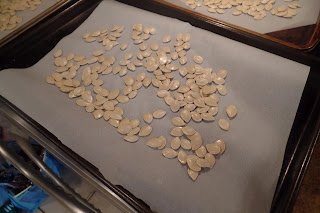 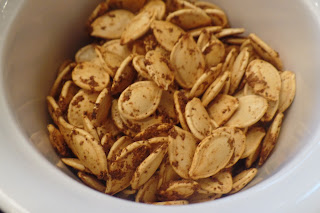 BBQ (inspired by Food Network, but had to figure out the amounts myself so used the Wholefully blog's Sweet and Spicy flavor as a guide) 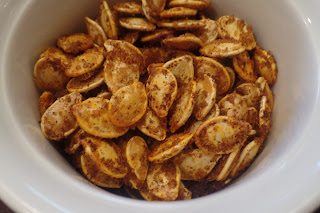 Parmesan Dill (I made this one up myself, but was inspired by a marriage of two flavors at the Wholefully blog!) 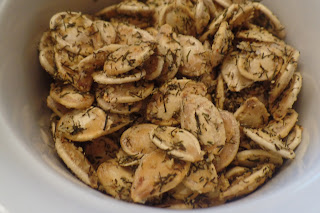 2. Measure out dry spices for each flavor and set aside. 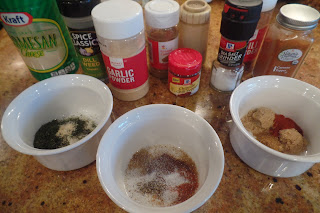 From left: Parmesan Dill, Fiery, BBQ
3. Toss pumpkin seeds with the liquid ingredient (olive oil or hot sauce, for these recipes), making sure each seed is coated. 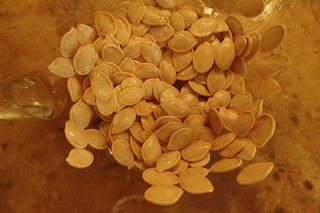 Add dry spices to the seeds and toss to coat. 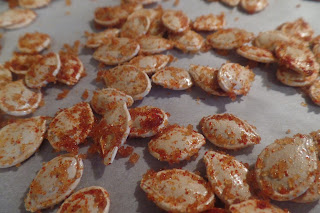 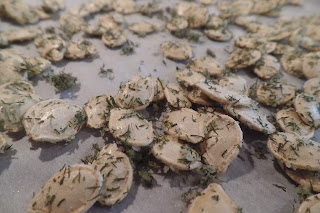 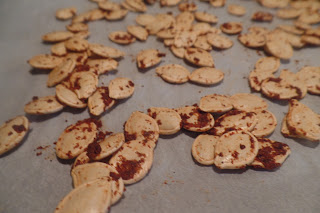 5. Bake at 300 degrees for 20-30 minutes, stirring every 8 minutes, until golden brown but not burned. (NOTE: Your bake time will depend on the thickness of your cooking sheet. Both my Parmesan Dill and BBQ flavors were on a standard-weight baking pan. Those became crispy and golden in 24 minutes. The Fiery flavor was on a heavier-weight, darker baking pan and needed the full 30 minutes to reach the same level of crunch. In sum, you'll need to keep your eye on them as you open the oven every 8 minutes to stir.) Mine were perfectly golden and none of the seeds or the ingredients burned. (I was concerned for the brown sugar.)

6. Cool before eating. They become crunchier as they cool.

We had a great time taste-testing these.

My daughters agree with one another--SHOCKING!-- in both their comments and preferences. They like the Parmesan Dill flavor best (and think it tastes like popcorn), then the Fiery ones (which they don't find all that spicy), then the BBQ (which they find the spiciest).

My thoughts? I also like the Parmesan Dill flavor--and agree it tastes like a cheesy popcorn--but I prefer the spicy-sweet foil of the BBQ more than the straight up spice of the Fiery. However, I find them equally spicy--I found the heat hits different parts of your mouth.

My husband is still sipping his coffee so he won't taste them yet. Killjoy!

Enjoy your Saturday!
Posted by Natalie M at 2:46 PM