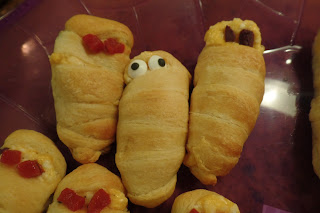 As I indicated in my post yesterday, last night was movie night with a side of mummy poppers.

I'm disappointed to report that the movie (the remake of Ghostbusters) was stupid and the poppers--no matter how cute and festive they look-- were gross.

This was the second time I've seen Ghostbusters. I saw it in the theater over the summer with some of my college girlfriends. I wasn't feeling my best that day and I didn't enjoy it there, either, but I thought perhaps some of my disappointment was because I felt blah. Turns out, it's just not that great. The girls seemed to enjoy it well enough, but my husband and I did not. Weak plot, underdeveloped characters, eh acting, questionable casting...it simply didn't deliver. Especially when it could have been so much better. So boo to poorly-done remakes.

But a bigger boo to disappointing and slightly labor-intensive appetizers, like the mummy poppers.

Usually, I'd post the actual recipe on here but because since I wasn't a fan and wouldn't make these again, I'm not going to bother. I found the recipe through Frugal Coupon Living blog. I followed it pretty closely except that I used 5oz of cheddar cheese instead of 8 oz of pepper jack cheese, and also used 4 jalapenos and 3 small sweet peppers from our garden. Otherwise, I did what it said to do. 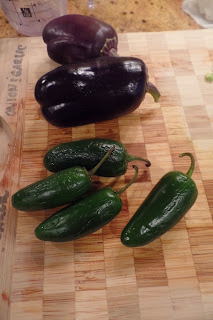 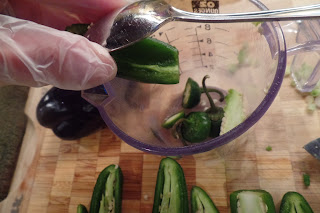 Scraping out the jalapeno seeds--I wear a rubber glove for this because sometimes those peppers are HOT and the juice gets on your hands. 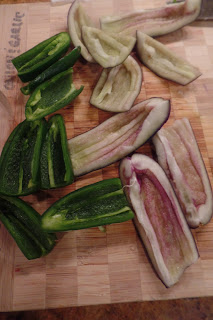 The peppers that aren't green are sweet ones from our garden. I used them and cut them into quarters so they were roughly the size of the jalapeno halves. 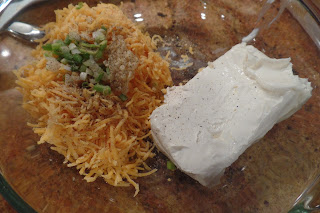 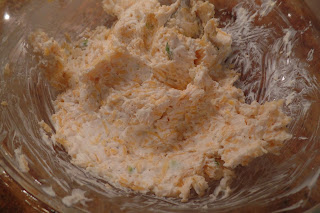 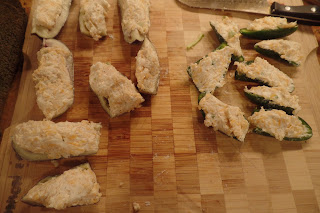 Stuffed into the peppers. 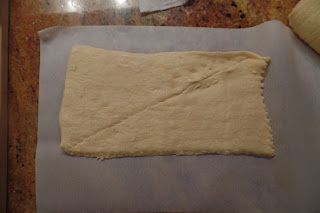 This is two crescent roll pieces pinched lightly together to form one rectangle. You'll repeat this step to form three more rectangles. 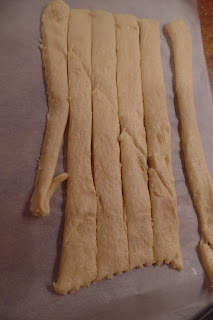 This is the rectangle cut into strips. 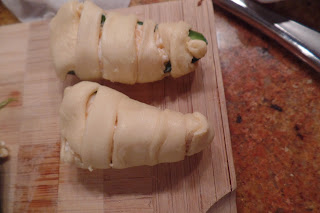 Wrap the strips around the peppers. 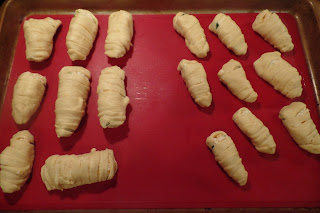 Lay on a tray. 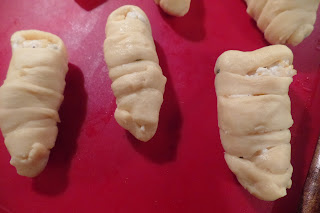 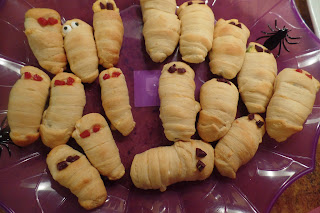 Once out of the oven, put on the eyes. For mine, I used eyeball candies, pimento pieces, and olives. The eyeball candies look cute, but it's candy on a savory dish which is kind of gross.

Interestingly, it was those candy eyeballs that drew in my younger daughter. That's the one she claimed as her own. When she bit into it, she said, "I love these!" She ate two more bites and discarded the other half of her mummy on the plate. End of story. My older daughter wouldn't even try them because she doesn't like cream cheese and doesn't like crescent rolls. She did, however, eat some of the olives off the mummies.

My husband and I shared our daughters' lack of enthusiasm.

Texturally, they're kind of one-note. You know how poppers typically have kind of a crunchy, fried/baked exterior? These didn't. The crescent rolls are soft and pillowy. There was no satisfying sense of teeth munching through the exterior to expose a gooey, cheesy center. It was sort of just...mush...the whole way through. (Except for the three I made with leftover wonton wrappers since I ran out of the crescent rolls with three peppers remaining. Those were a little crunchier--a good thing--but still not quite right.)

Taste-wise, they were also just meh. The cheesy center was neither gooey or oozy (which I kind of like in a popper), nor did it have much flavor. (Perhaps the pepper jack cheese would have helped. Sadly, I'll never know.) The jalapenos I bought happened not to be particularly spicy (which, with jalapenos, is always a crapshoot) so they tasted about the same as the sweet peppers I used, with the exception of a slight difference in bitterness. I tried adding extra salt to the outside in an attempt to improve the situation but it didn't work. There was no saving them.

So we gave up and had a piece of pie instead. That, at least, was delicious.

In sum, I wouldn't recommend the new Ghostbusters or these poppers. But I'd urge you to make some pie (and definitely put the leftover cream cheese frosting on top! I did that and it was sooooo good.)