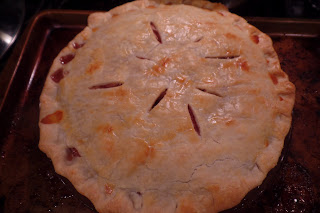 It is a miserable day out there today. Rainy. Windy. Cold.

The weather upset our plans for the day. We were going to venture out to the Harry Potter festival, but instead we stayed home. The girls, being their enthusiastic, creative selves, brought the festival to our house. They donned their Harry Potter and Hermione Granger costumes, set up a feast and the Sorting Hat, and organized their rendition of Diagon Alley. Gotta love the enthusiasm.

After everyone was sorted into Gryffindor and got their wands and made some potions, we watched Legend in the warmth of our family room. What a Saturday.

I read about pink apple pie in a book by Alice Hoffman. She usually writes for adults, but in Nightbird, she writes a middle grade tale of magic. And in it? Pink apple pie. I thought, why not? I've certainly got the apples.

Hoffman's recipe calls for strawberry and raspberry jam. As it turns out, since my husband uses jam on his toast every day, I was fresh out of strawberry. But I did have raspberry. And peach. So I made do.

Thus, technically, this recipe isn't even the right one, but it still turned out magically delicious. Hmmm....that phrase sounds like it was born to be a marketing catchphrase or something, doesn't it? ;-)

2  9-inch pie crusts (I took some help from the store and bought the pre-made Pillsbury pie crusts from the store. so convenient)
6-8 apples, peeled, cored, and sliced (I always slice mine suuuuper thin-- that's my personal secret to great, award-winning apple pie!)
3/4 cup seedless red raspberry jam
1/4 cup peach preserves
(*you could also go with Hoffman's original suggestion here and use 1 cup of seedless strawberry jam instead of the raspberry and peach)
sprinkle of cinnamon
egg, lightly beaten (for an egg wash to make the crust nice and golden when it cooks)

1. Preheat oven to 375 degrees. Line a 8-9" pie plate with a single crust and trim around the edge so the edges are flush with the rim of the dish. Set aside. 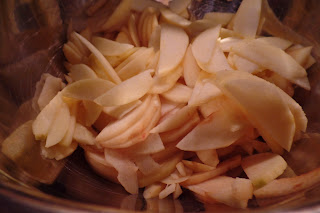 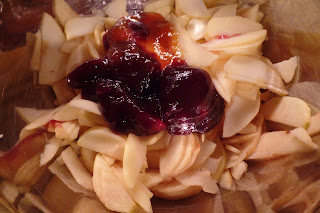 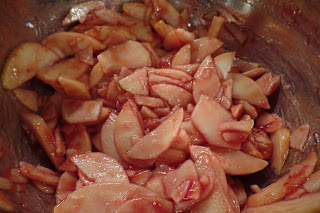 3. Pour into prepared pie shell. Then sprinkle the top with cinnamon. (The original recipe didn't call for the addition of any spices, but I decided to go with some cinnamon here because the coating on the apples was very sweet and I was trying to tone it back just a touch and add a little depth of flavor. You can leave it off it you don't like it, but I was glad I added it.) It's okay if the apples are sort of heaping when you fill the shell-- they cook down a bit during baking. 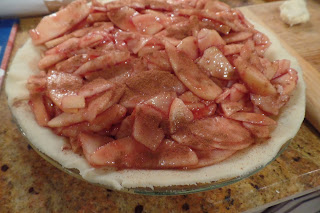 4. Top with the second pie crust, folding under the crust which is hanging over the edge, and tucking it around the lower crust. Then crimp the edges to seal it closed. (There's a close-up picture of me doing it at this post from a classic apple pie I made last year.) Cut some slits in the top of the crust for vents, then brush the top of the pie crust with your egg wash. 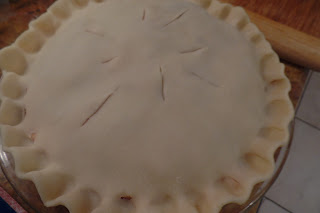 5.  Place the pie on a baking sheet (trust me on this--the baking sheet will catch anything that bubbles out of the crust) and then bake for 20 minutes with foil covering the edges (so it doesn't burn), and then another 25-30 without the foil. The pie is done when the crust is golden brown and the fruit inside is bubbly. 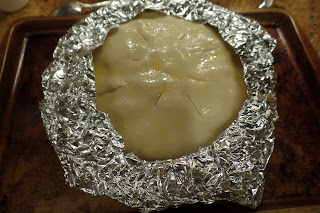 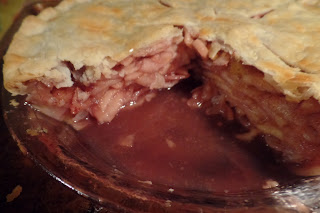 I cut mine when it was still warm, so you can see the juice in the bottom of the dish here 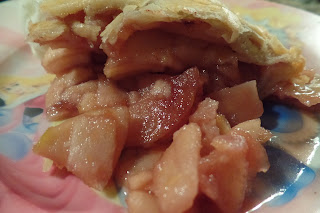 This pink confection was fit for a princess (plate)--LOL
Delicious warm or at room temperature with a dollop of whipped cream or a la mode! Enjoy!
Posted by Natalie M at 4:38 PM