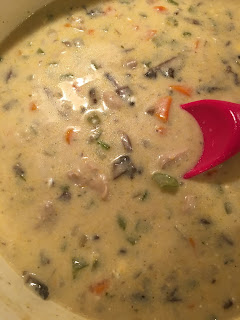 You know that old saying, “Dress for the job you want”? Well, today I’m cooking for the weather I want, because it’s been unseasonably warm outside. (Which is a real fall-buzzkill, I might add!)

The fall should bring brisk temperatures encouraging sweaters and one-pot stews. Instead, my kids are still wearing shorts to school and running around without so much as a jacket! Sigh. What a bummer.

Today’s offering is this one-pot creamy chicken stew. It makes use of chicken thigh meat, plenty of vegetables, and two different forms of cheese to create a creamy, dreamy, hearty stew that just begs for a nice crusty roll for dipping. (Ironically, I had no roll the night I made this. Next time, though. And there will be a next time!)

I found the recipe for this in the Kraft Food and Family Fall Magazine (Fall ’18 issue), which is why specific brands/products get a shout out up in here. As it were, I did use the recommended products with good results, so I can say they worked well in this recipe.

Full disclosure: I kind of hate working with chicken thighs. The meat itself tastes good and always turns out moist and tender in a way that chicken breast meat does not. However, even when I buy the boneless, skinless thighs, there’s always a ton of residual skin that needs to be trimmed off and it’s a pain. I suppose it’s not 100% necessary to trim it, but I always do. If you’re like me and feel the need to get that white gunk off of there, by all means set yourself up for success and sharpen your knife! That’ll make your job so much easier.

Now that you know that handy trick, let’s get cookin’! 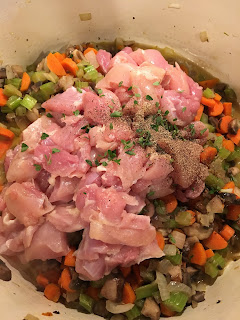 3. Cook 8-10 minutes, or until chicken is cooked through (I let mine go for 10 because some of my pieces were slightly larger than others.). Stir frequently. 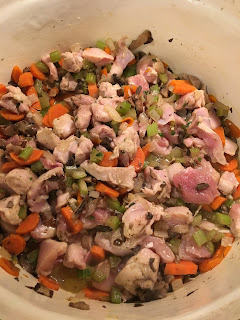 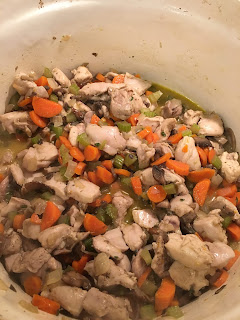 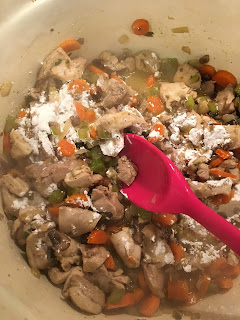 5. Stir in broth and cook until it just comes to a boil. Once boiling, stir constantly and cook until thickened (1-2 minutes). (Mine never got super thick during the cooking, though it did get thicker. It’s quite possible that’s because I added an extra cup of broth but didn’t increase the cornstarch.) 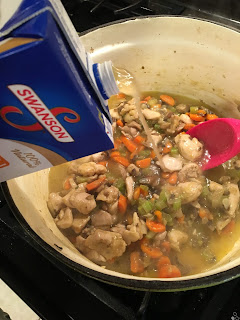 6. Remove from heat. Stir in cream cheese and shredded cheeses, stirring until melted.
7. Serve and enjoy! 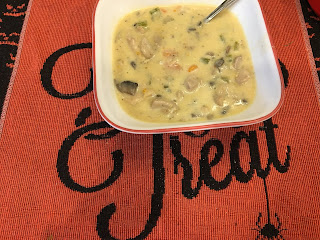 Now, I don’t do a ton of cooking with mushrooms (except for these mushroom burgers!). In fact, I usually omit when they’re called for in recipe like this one. This time I decided to leave them in, though, because I thought they might lend extra heft to the stew. I was right.

When my girls and I were eating (my husband was at a meeting), my older daughter said, “This tastes exactly like Panera’s cheddar broccoli soup. Only, you know, without broccoli.” And you know what? The broth – creamy and cheddar-cheesy—did taste a lot like it. (It also kind of reminded me of cream of chicken wild rice. Only, you know, without wild rice.) She asked me if we could add broccoli and I thought More veggies? By request? Sure! So I steamed the broccoli crown we had in the crisper drawer, gave it a rough chop, and added it to the pot. Boom. Two soups in one. (I didn’t get any photos of it with the broccoli, obvs.)

This robust, satisfying one-pot stew made a hearty dinner.

The only thing that would have made it better (beside a crusty buttered baguette for dipping!) is if I’d been able to enjoy it whilst wearing a sweater. Oh well. Next time!
Posted by Natalie M at 1:23 PM