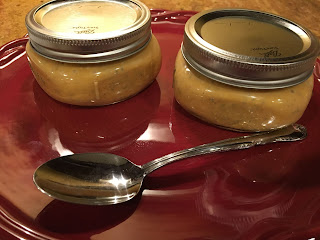 Remember that can of pumpkin I opened recently to make these tasty pumpkin pie biscotti? Well, it turns out, if you put your mind to it, you can stretch a can of pumpkin puree rather far.

Moreso out of a desire not to waste any pumpkin than to PUMPKIN FLAVOR ALL THE THINGS, I used another portion of the can on today’s recipe. (Though--side note--on Saturday I tried a Kohr Bros pumpkin and cinnamon twist custard on the Ocean City boardwalk and they nailed the pumpkin pie flavor! Generally, I wouldn't have gone for that, but I felt like I should try it because I've never been to the shore after the summer so I should take advantage of this new, exciting flavor option I don't usually get. I almost stopped in for some pumpkin fudge but my husband told me not to get crazy. And he was right. Plus, I've got a fudge recipe coming up this week. Apple pie flavor. It is sooo good.)

And lo, I bring unto you: overnight oats.

Have you ever had these? As a big fan of oatmeal (though not this recent disturbing news that our oats are poison!), I’ve pinned several overnight oats options, but this is actually the first time I’ve gotten around to trying them.

And, to be frank, it may be the last.

It’s not that the recipe came out badly. Rather, it turns out I don't like overnight oats.

This admission may leave you asking, “But if you don’t care for it, why are you sharing the recipe?” The answer to that, friends, is two-fold.

Number one, YOU might like it. The recipe itself came together easily and I love how customizable it was.

Number two, I like the transparency. If I make something that works and I love it, of course I want to share it. But if I make something that doesn’t work or I don’t like how it came out, I still think there’s value in sharing it. If I botched something or the recipe isn't great, maybe I can save you from making the same mistakes I made. (Or, if it’s really bad, maybe I can save you from wasting time in the first place.) The internet is too full of false perfection that’s not real life. We need to be more honest about being human. It needs to be okay to admit when we try a new recipe and it ends up looking like vomit.

That said, let’s get back to it.

I used a recipe from wholefully.com as my starting point. The post I’ve linked to offers not only pumpkin spice overnight oats, but also several other tasty-sounding options. As I noted before, the recipe itself came together simply and if I wanted to try overnight oats again, I would go back there for further inspiration. In this instance, my feeling about the final product doesn’t reflect an issue with the recipe itself. 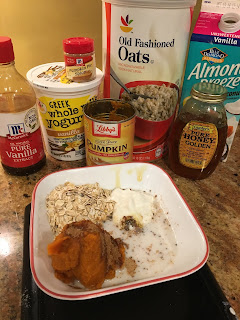 Pumpkin Pie Overnight Oats
Servings: 1 massive or 2 reasonable (I did mine as 2)

Directions:
Combine all ingredients in a bowl. Stir to combine. Portion into 1 or 2 glass jars and refrigerate overnight. (At least 4 hours.)

As I added ingredient after ingredient, I was keenly aware of the rising calorie count of this meal (about 422 calories as listed). That is part of the reason I decided to portion this as two smaller 3/4 cup servings instead of a giant 1½ cup serving.

After chillin’ like a villain overnight in the refrigerator, the oats were ready to eat.

I removed the lid and…well, they didn’t look appetizing. Like even a little. Their color and texture reminded me of vomit. I know that’s gross, but it’s true. I felt like Gordon Ramsay was gonna come in and go all Kitchen Nightmares on me (warning: link is NSFW), yelling things like, “This looks like something inside a baby’s diaper!” or “You’re going to kill somebody!” Haha. Good ole Gordon.
I ignored the appearance and dug in. On first bite, I tasted a pleasant pumpkin pie note. Which is a good thing. But it was cold, which is okay for actual pumpkin pie, but far less appealing in oatmeal. It also had an unwanted tang (from the yogurt) and annoying gelatinous stuff caught in my teeth (the chia seeds, which I’d leave out if I did overnight oats in future), not to mention it lacked a certain creaminess I longed for. I solved that problem by adding copious amounts of whipped cream (the same way I enjoy pumpkin pie, come to think of it.) That’s the only way I was able to consume it.

Positive note: it kept me satiated for hours. The second day I tried again with the other portion, but even with the whipped cream, I could only manage to eat ¾ of the jar.

So, for me, there just wasn’t much recommending this stuff.

Though I realize my write-up isn’t much of a recommendation, if you are familiar with and enjoy overnight oats, and if pumpkin pie (and maybe even chia seeds?) are your jam, these are worth a go.

Just don’t under any circumstances try serving them to Gordon Ramsay.


**I have no affiliation or relationship with any of the brands mentioned or linked in this post. All opinions and experiences expressed herein are my own.**
Posted by Natalie M at 1:23 PM