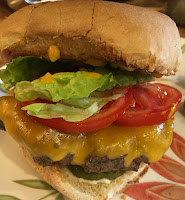 Hey all! Long time no recipe. But that ends today because I've got one I need to share.

Right. Well, my family falls pretty squarely in the “NOT mushroom people” camp.

In general, I don’t cook with them. When we eat out, we ask for them to “hold the mushrooms.” And, with the exception of the occasional surprise of a satisfying mushroom bisque, we just generally steer clear of this particular fungus.

That said, when I saw a Tasty video featuring a Sonic chef recreating a popular Sonic burger (they call theirs a "Slinger") that uses ground mushrooms to bulk up the burger patties, I was intrigued.

I liked the thought of fewer calories and red meat than an all-beef burger, plus added veggies. But could it possibly taste good? How could a family of non-mushroom lovers get behind this concept?

But then I thought about it. Mushrooms can be quite meaty. People eat portabella “burgers” wherein they grill and dress an entire mushroom cap as though it were a meat patty. So grinding some up and mixing it with meat...it might work.

I decided to try it. I bought lean ground beef and baby ‘bellas, and didn’t mention my plan to my family.

I was nervous the whole time I made them. When raw, the mushrooms smelled earthy and unappetizing. Plus, the meat-veggie mixture took on a grayish hue because of the mushrooms. (However, once they were grilled on my cast-iron skillet they looked “normal” once more, and with the exception of a few larger bits of mushrooms, you couldn’t actually *see* the mushrooms in the burger.)

As I bit into mine, I was surprised to find I also couldn’t detect much of a mushroom taste either, particularly with all the burger toppings I’d used. And I was even more surprised to discover how satisfyingly juicy the burgers were.

My 10-year-old eyed me suspiciously and asked if there was something different in these burgers. Between bites, my 7 year old (who’d helped me make them) casually said, “Yeah, there’s mushrooms in them.” I held my breath, waiting for an explosion of disgust or a refusal to eat the burger. Which, okay, she did try. She was like, "No way I'm eating a burger with mushrooms IN it." (Presumably as opposed to on top which she could pick off.) Still, we have a "3 bites, no thank you" rule here at my house, so she knew she'd need to give it a try. That was the last she said for several minutes as she ate and ate in happy silence. Then she declared, “Well, I think you should make burgers with mushrooms from now on. For one thing, you can’t even taste the mushroom. For another, the meat is so moist and easy to chew!”

She had a point. Every one of us devoured our entire burger, and I’ve made them 3 more times in the past two months. She requested them two of those times.

Now, overall, I still wouldn’t call us “mushroom people,” but we are unequivocally “meaty mushroom burger people.” I feel strongly that you will find yourself in that camp, too, if you give these a try.

1. Place meat in a medium bowl. 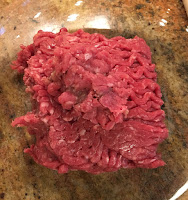 2. Gently wipe mushroom tops with moist towel. Slice and place in food processor. Pulse until finely chopped. (Note; the smaller your pieces, the more they’ll “disappear” in the meat. If you leave your chunks too large, the burgers won’t hold together as well and the mushroom flavor will be stronger since you’re biting into a chunk of mushroom. See the photo below.) Don’t be afraid to stop several times and stir around the mushrooms in the bowl to make sure they’re all getting equal blade attention.
*Also, feel free to blot the tiny mushroom pieces with a paper towel to remove excess moisture. (In my 4 times making these, I've only done this once, but I found the burgers held together better and were still juicy when cooked.) 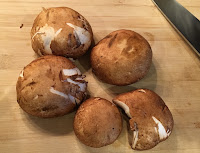 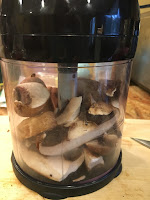 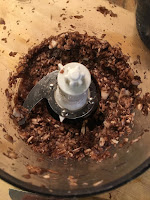 3. Pour chopped mushroom into bowl with the meat. (See how the mushrooms are the same general size as the meat?) 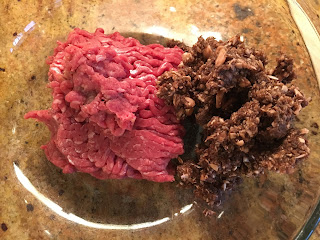 4. Use your hands to work the meat and mushrooms together. 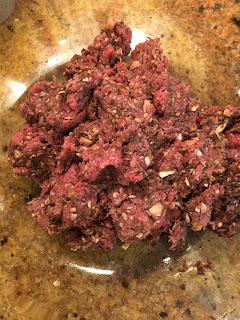 5. Divide into 4 portions (I use a food scale for this.) *Full disclosure: in this photo, there's two 3oz burgers and two 5oz burgers. Your eyes aren't deceiving you if you think they don't look uniform. 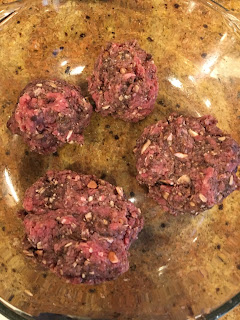 6. Flatten into thin patties. Salt and pepper the side facing you.

7. Heat a cast-iron skillet on medium-high heat. When hot, drizzle a teaspoon of olive oil onto the skillet and place the burger patty, seasoned-side down, in the pan. Salt and pepper the side facing you. (If your pan isn’t big enough to accommodate 4 burgers at once, you can do this in batches, 2 at a time.) 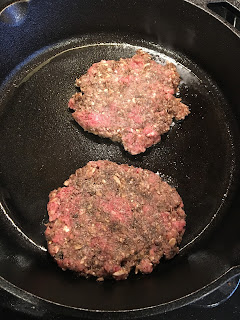 Leave the patty alone until it cooks about halfway up the side of the patty and has a golden sear on the side that’s pan-side down. (About 3-5 minutes depending on thickness and your preferred burger temperature. Mine usually end up well-done because I prep my veggies while they cook, but they're still very moist.) Flip the burger and cook for another 2-3 minutes.

9. Place cheese on burger patties and let cook another minute or so. While the cheese melts, place buns in toaster for one toast cycle. (Alternately, though I've never done it, you could place your bun face down in your skillet to get a toast on it.) 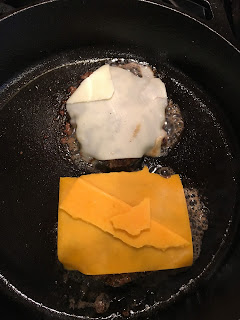 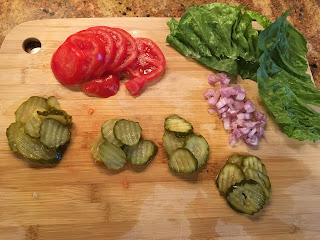 Bottom bun: 1 teaspoon mayo, pickle slices (the burger patty will go next, on top of the pickles) 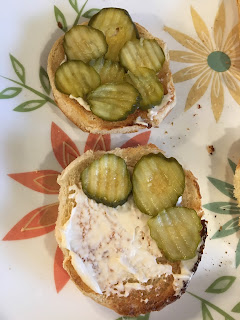 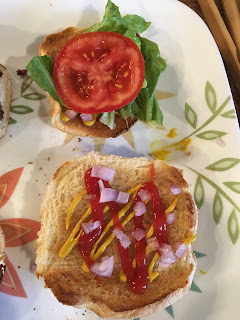 And there you have it. What a beaut! (Not my messy counter--that burger!) 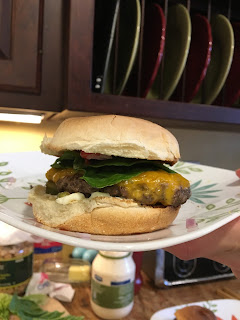 See how you can't see those mushrooms in the cooked burger?? 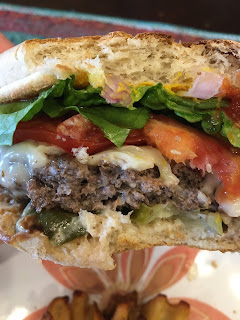