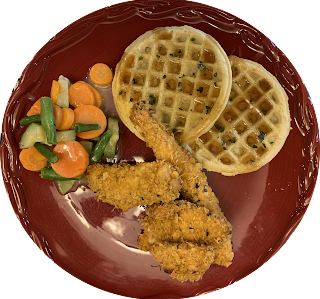 Today’s dinner is one I saw while browsing and it looked tasty and like something my family would like, and was something out of my norm, so I tried it. I’m not sure it strictly (or even loosely?) qualifies as “fall-inspired,” but I’m going to include it in my countdown for 3 reasons. A. I made it during this countdown period, B. I found the recipe for itin the October 2018 issue of the Food Network Magazine, and C. It was next to a recipe for a Sheet-Pan Apple Spice Pancake, so, by transitive properties and all of that, it’s a “fall” meal. 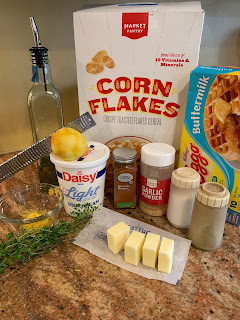 3.     In a large bowl, crush 5 cups of cornflakes. (I used my hands to crunch them up. If you don’t want to use your hands, you could put them in a ziplock bag and beat them with a rolling pin, or even give them a whirr in your food processor.) Add 1 Tablespoon thyme, a quarter teaspoon each of salt and pepper, and 2 Tablespoons olive oil. Stir and set aside.
4.     Place the chicken slices into the sour cream mixture and toss to coat. (Again, I used my hand to make sure each piece was coated on each side. Wash your hands before the next step.)
5.     Work with 4 chicken slices at a time. Use a fork to put coated chicken slices into the cornflake mixture. Coat the chicken with the cornflakes (I used the fork to scoop cornflakes on the top until it was fully coated, pressing gently when necessary to adhere.) Remove cornflake-coated chicken strips from the bowl and place on the prepared pan. When all the strips are on the pan, spray all the chicken with cooking spray.
6.     Bake 15 minutes, or until lightly brown on top. (I rotated my pan halfway through.)

7.     While chicken bakes, prepare the herb-butter mixture by combining softened butter, the other half of the lemon zest, and 1 Tablespoon thyme. Set aside until ready to use.
8.     Arrange waffles on a rimmed baking sheet and bake 10-15 minutes or until toasted and hot. (Note: the original recipe calls for us to use the same pan the chicken is on, but my chicken took up my whole pan. So I used another pan. The original recipe also calls for arranging the waffles in two rows on the pan, overlapping them, flipping and rotating the waffles halfway through the 10-15 minute bake time. I followed their instruction, but there was still a soggy section at the end, so after I’d baked the waffles for about 12 minutes, I placed them flat on the pan for another 2-3 minutes so they were crunchy on both sides.)

LEAVE THE CHICKEN IN THE OVEN TO CONTINUE COOKING DURING THIS TIME, cooking until the thickest part of the chicken registers 165 degrees.
9.     Spread herb butter over the waffles to serve alongside (or under) the chicken. Serve with or without maple syrup (see my comments below). 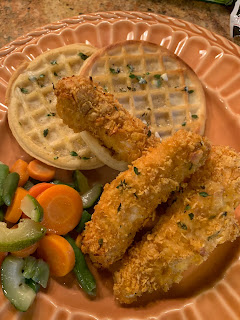 When I was at the gym dropping off some apple walnut oatmeal cookies for the staffers, I asked their thoughts about this dinner. “What should I serve as a side for chicken and waffles?” One of them said, “Maple syrup!” hahaha. Touché! However, I feel like vegetables need to be included with dinner, so I served my chicken and waffles alongside a medley of green beans, carrots, and zucchini in a light rosemary sauce (it was Green Giant brand—I just heated it in the microwave) and everyone in my house agreed it paired nicely.

We were more split when it came to the butter and syrup.

The good news is everyone in my house enjoyed the meal; however, we all had varying preferences on how we ate it. For instance, neither of my daughters wanted the herb butter, so I didn’t put it on their waffles. My older daughter ate everything separately. That is, she had waffles with syrup and butter the way she would with breakfast, then she ate her chicken on the side with ketchup. My younger daughter did the same with her waffle, but dipped her chicken in BBQ sauce. My husband liked the herb butter a lot, but felt maple syrup overpowered it on the waffles. He preferred a BBQ sauce with the chicken and waffle together because he thought the BBQ complemented the butter without overshadowing it. Personally, I liked the maple syrup with the herb butter and the waffles together with the chicken, but I also liked dipping my extra chicken in the BBQ.


All this to say: there’s plenty of ways to enjoy this meal! It’s easy to adapt to suit your tastes, and a fun way to change things up from a normal dinner fare.

So, c’mon kids, say howdy doo to this chicken and waffles for your next meal!

**I have no affiliation or relationship with any of the brands mentioned or linked in this post. All opinions and experiences expressed herein are my own.**
Posted by Natalie M at 2:48 PM