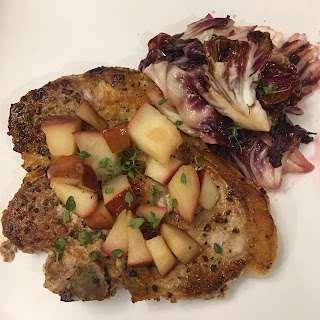 I don’t know about you, but when I’m hungry and I browse through magazines, everything looks so tasty and I want to eat it. Even things I don’t normally go for. Like pork chops. And radicchio (too bitter).

That’s how it came to pass that when I did meal planning last week, I added bone-in pork chops and radicchio to my list. The photo in Rachel Ray’s Every Day September 2018 issue looked so bright and fresh and something about it screamed “fall” to me, so I had to make it. (The balsamic-glazed pears didn’t hurt, either!)

The recipe is posted online, too, so I’m just going to share the link and you can go there to view the formal writeup. I’ll show you in my photos how mine came together.

First I cooked the pork. The original recipe called for four 8 oz bone-in pork chops. My market was selling them in packs of three so I started with six chops instead. I worked in two batches so as not to crowd my pan. I followed the same cooking method for both batches, simply wiping the pan with a dry paper towel in between batches. When my pork finished cooking, I removed it to a plate and covered it loosely with foil to stay warm.
In the same pan, I cooked my pears with some butter, sugar, and some white peach balsamic vinegar until they were tender (about 5 minutes). The original recipe called for plain white balsamic vinegar but I have this yummy peach stuff from a local artisanal store so I used that because I love it. When those were done, I transferred them to a bowl.
Finally, after cleaning the radicchio and giving it a twirl in the salad spinner, I heated some olive oil with more vinegar in the same pan (this time I didn't wipe it out after it had cooked the pears) and added the radicchio. I tossed it with tongs until it wilted, then seasoned it with salt and pepper.
For plating, I put a chop on the center of each plate, then topped it with pears. The radicchio was piled alongside the pork on one side. Then I sprinkled fresh thyme on top (for added color and flavor.) Voila! Dinner.

The pork and pears were extremely tasty, though the wilted radicchio was not our fave (still kinda bitter). Nevertheless, I was happy to have tried it and when I presented dinner that night I felt badass since it looked so pretty on the plate. (You know, like a meal you might serve to company that wasn’t terribly difficult to whip up.) Generally, my husband and I are the only ones who notice that sort of thing. What my kids did notice were the plates themselves. While they’re getting used to my weird habits when I blog recipes, this was a new one. We each ate this dinner off a different colored plate because--nerd alert!-- I wanted to see which color made the best backdrop. (But those professional food stylists and food photographers know their stuff. It makes such a difference!) Which do you like best? White (at the top of the post), maroon, marigold, or olive? 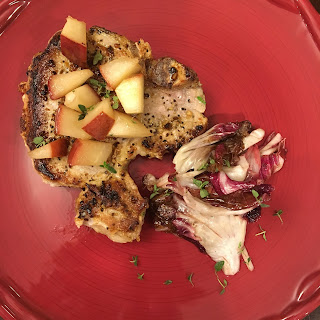 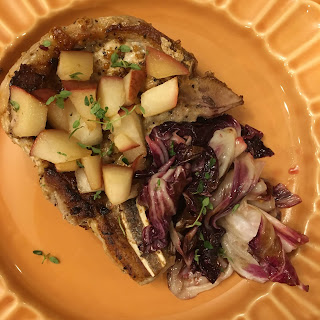 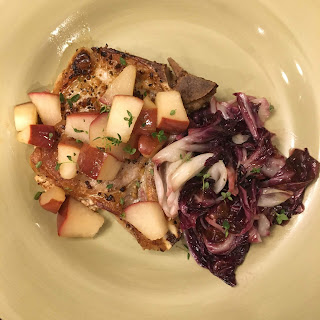 I hope browsing this post made YOU hungry, and you'll add this impressive (yet quick and easy!) dinner to your own meal-planning list.

**I have no affiliation or relationship with any of the brands mentioned or linked in this post. All opinions and experiences expressed herein are my own.**
Posted by Natalie M at 10:53 AM