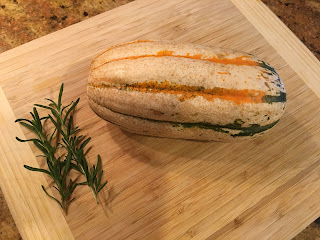 Yesterday, I featured pumpkin biscotti and referred to other pumpkin recipes upcoming. I'm going to get to those soon. But since I'm attending a wedding today I'm keeping it simple and sharing a vegetable side dish I made recently. Hang in there: not every day can be cookies. (I know, I can’t believe I just said that, either!)

I always get excited when I walk through the produce department. I love trying new fruits and vegetables, and I’ve been known to buy more veggies than I have plans for in any given week (particularly if I visit a farmers market or smaller grocer. Then LOOK OUT; I will buy it all!)

This is most definitely the season of squash. I’ve worked with:

·     Spaghetti squash--so named because, when cooked, the flesh resembles stands of spaghetti. I have a kinda famous (in my family) yet ridiculously simple spaghetti squash “recipe” which I brought to Thanksgiving one year and haven’t been allowed to skip since. I’ll try to remember to share it on here. I’ve also made *delicious* spaghetti squash lasagna boats for dinner a couple times. They’re sort of labor intensive, but they’re most delish.
·     Acorn squash—whose shape resembles a giant acorn (and, because of the ridges, is sort of a bear to peel). This is an ingredient in one of my husband’s favorite fall soups, Acorn Squash and Pear Soup. I thought for sure I would have shared that on here before, but I just checked my archive and it turns out I have not. I’ll have to remedy that. Stay tuned. (My husband will be thrilled!)
·     Butternut squash– a pretty popular, well-known squash, this guy has a golden exterior and bright orange flesh, and a sweet, sometimes nutty flavor. You often see them in stores skinned and pre-sliced. That’s because they’re annoying to peel and chop, in part because they’re so firm. They’re versatile, though, and make good bisques.

Those are all nice options, but I wanted to add a new squash to my arsenal: Delicata squash. This guy is more tubular in shape and has a thin, edible rind (a “delicate” rind, if you will. You know, hence the name.) It’s sweet and tender and quite nice! I’ll admit, I didn’t know these facts about it when I bought it. But you can bet your bippy I was PUMPED to discover I didn’t need to remove the skin! YASSSSSS!

I decided to keep things simple with the preparation. I googled cook time and temperature and went from there. I chose to season it with rosemary from my herb garden.

Scrub outside of squash with a veggie scrubber (since we’re leaving the skin on and eating it!) then slice into ½ inch slices. 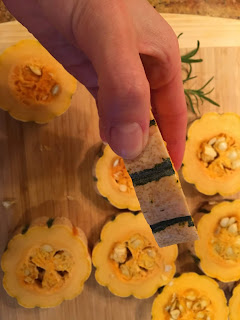 Remove seeds from slices using a spoon. (Alternately, you could half the squash longways and scoop out the seeds, then slice. But then you won’t get that lovely sunflower shape.) 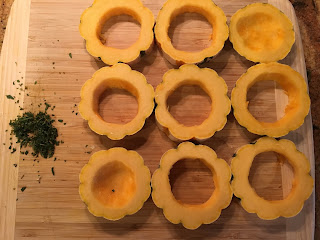 Place in single layer on a rimmed baking sheet, then drizzle with ½ -1 Tablespoon of extra virgin olive oil and toss to coat. Sprinkle with salt and pepper and ½ Tablespoon of finely chopped fresh rosemary. 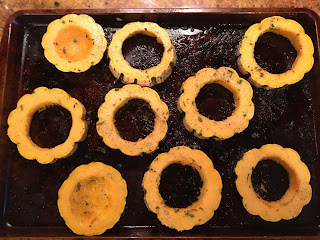 Roast for 25-35 minutes or until squash is golden and soft, flipping squash slices halfway through roasting time. (Mine only took 27 minutes.) 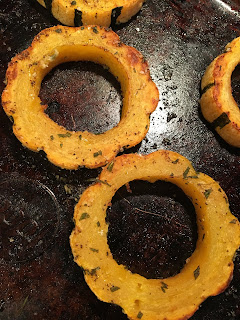 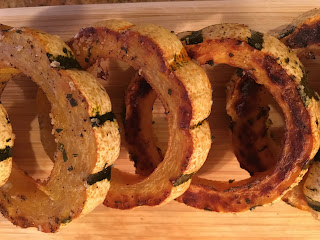 I happened to serve this as part of a fun antipasti dinner, and it was a delicious addition. (My kids LOVE when I serve meals family-style and they get to help themselves to whatever they want, so I took some inspiration from the cover of Rachey Ray’s Every Day September 2018 issue and did my own thing with it and served these sweet squash with it. It turned out really beautiful, if I do say so myself.)


I hope you’ll give this squash a try.

**I have no affiliation or relationship with any of the brands mentioned or linked in this post. All opinions and experiences expressed herein are my own.**
Posted by Natalie M at 11:02 AM