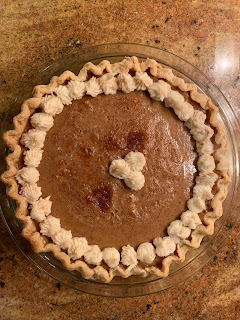 Remember yesterday’s post when I talked about how I felt like baking all the things? Well, today (which for me is Sunday, but for you is Tuesday as we’re on a slight delay here because life!) I made another pie and I’m excited to share it with you.

If you’ve been following along each day, there’s a good chance you read my apple butter post—a really good chance, in fact, as it’s my most-viewed post this month! Maybe (ihopehopehope) you’ve even made some of your own. If that’s the case, it might also mean you’ve got a lot of delicious apple butter sitting in your fridge that you don’t know what to do with.

WELL I KNOW WHAT TO DO!!!! (Ok, this thing I’m about to share right now is completely off topic, but excitedly typing out “I know what to do” reminds me of the time I got my first Charlie horse. I was a teenager and laying on the couch in the family room one night when, out of nowhere, my calf muscle tensed up and I yelped in pain and grabbed my leg, not knowing what was happening or how to stop it. My mom, seated nearby, jumped up and yelled excitedly, “I know what to do! I know what to do!” before finally doing it, that is, flexing my foot back toward my ankle and releasing the muscle. I will never forget that.)

Plus, if you went out and bought some pie dough so you could make the Dutch Apple beaut I shared yesterday, you have a leftover pie crust just calling your name. "Helloooooo. 'Tis I, Lady Pie Crust. Please use meeeee..."

It turns out there’s such a thing as apple butter pie! It’s basically the same texture as pumpkin pie, but it’s made with apple butter. I know! I had no idea, either! I love the internet.

Like the texture, the recipe is pretty darned similar, too. The biggest difference is that we use a great deal less apple butter than the pumpkin puree equivalent (only a half cup instead of about 1 ¾ cups in a 15oz can), but there’s also one fewer egg, a quarter cup less sugar, and about half a cup more evaporated milk. When I poured the very liquidy mixture into the pie shell, I was dubious. But it set up exactly as it was supposed to do and it was incredibly like a pumpkin pie.

I found this particular version of Apple Butter Pie on The Domestic Rebel blog and it was easy to follow.

Here’s how to make your own! 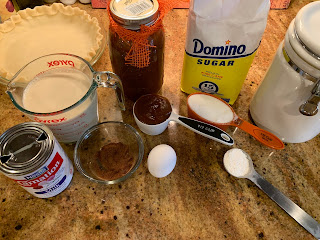 *if you don’t have apple pie spice, you can make your own. For the 2 teaspoon amount you need for this recipe, combine: 1 teaspoon cinnamon, ½ teaspoon nutmeg (or pumpkin pie spice if, like me, you loathe straight nutmeg), ¼ teaspoon allspice, ¼ teaspoon cardamom, 1/8 teaspoon ginger (optional)

Beat egg in a medium bowl, then add apple butter, sugar, flour, evaporated milk, and apple pie spice. Whisk until blended.
Pour into prepared pie shell.
Bake for 10 minutes at 425 degrees. Then, leaving the oven closed, lower the temperature to 350 degrees and bake an additional 35-40 minutes, or until a toothpick inserted near the center comes out clean. As the original recipe points out, the top may still jiggle but that’s fine because it continues to set as it cools. True story!
If topping with leftover cream cheese filling, be sure the pie is completely cooled before piping it on (otherwise it’ll melt all over the place!)
To pipe: use a freezer bag, snip one corner with kitchen shears to the depth of your piping tip; fit in a wide piping tip through the opening. I used Wilton 32 tip. (It needs to be relatively wide because the toasted coconut will otherwise clog the tip.) Spoon icing into the bag, then twist the bag at the top so nothing escapes while you pipe. Squeeze gently in small swirls. (I didn’t take pictures for this step today, but I’ve done so in the past. You can sort of get a sense for what I’m talking about here. Bonus: those cupcakes are THE BOMB.) 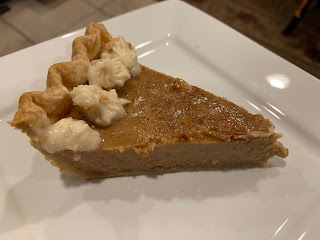 How great is that? In one recipe, you’ve used up your leftover pie crust, your leftover toasted coconut cream cheese icing, and some of your apple butter! I bet you’re glad you’ve been baking all the things right along with me! (If you haven’t, now you have a perfect excuse to make at least 4 things.)
What the hell? You know what? Since you listened to that ridiculous Charlie horse story earlier, I’ll give you a 5thone to use up a little more apple butter: the cookies that came up in my feed that I can’t stop thinking about. I think I’ll make them, too.

**I have no affiliation or relationship with any of the brands mentioned or linked in this post. All opinions and experiences expressed herein are my own.**
Posted by Natalie M at 10:21 AM