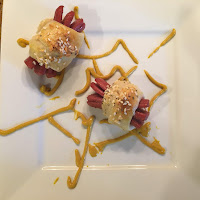 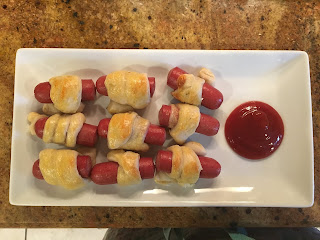 Every year I see festive Halloween recipes wherein crescent rolls are artfully wrapped around hot dogs to look like spiders and mummies, and every year I try making them for my kids. The thing is, my kids don’t like crescent rolls so they destroy my beautiful handiwork and trash the breadstuffs. I keep thinking the novelty of the look will somehow overshadow the flavor, but, well, let’s just say denial ain’t just a river in Egypt, folks.

Another tiny issue with these types of recipes is that when I make them, I typically make them expressly for my kids, since I myself am not so much a fan of hot dogs. It isn't that I don't like the flavor while I’m eating them. It's more that they aren’t filling and I feel unhealthy later. Plus, they give me a headache. It’s probably the nitrites. (Side note: once, when I was pregnant, I forgot how hot dogs were on the Forbidden Foods list. A craving struck one day and I brought a hot dog and bun with me to work. At lunchtime, I gleefully heated my hot dog in the microwave and it wasn’t until I was about halfway through eating it that it struck me: “I’m not supposed to be eating hot dogs!” I don’t remember if I finished eating it or not (I’m inclined to think I trashed it), but I do remember the intense headache I suffered as a result of my initial forgetfulness. Lesson learned, yo.) Still, I wouldn’t mind enjoying one every now and again. Like at Halloween. If it didn’t give me a headache and was dressed up as a bandaged finger, mayhap.

Whilst browsing Kraft's Food and Fun magazine (Fall 2018 issue), I came across this Everything Bagel Dogs recipe (which, strictly speaking, isn’t even a Halloween recipe!) that uses pizza dough instead of crescent rolls. I thought, “Hmm, the girls like pizza dough. Maybe they’ll like it on hot dogs. Maybe I can do this thing yet!” Serendipitously, around the same time I saw some Dietz & Watson Uncured Beef Franks (they’re free of nitrates and nitrites so maybe they won't give me a headache?!) at my market, so I took it as a sign that now was the time to try this novelty.

I will note up front that these particular hot dogs come in a pack of 7 instead of the typical 8--"yeah, and you wanna know why? Because some BIG shot over at the wiener company got together with some BIG shot over at the bun company and decided to rip off the American public!" BEST SCENE EVER-- so I made an immediate adjustment for yield right off. I knew I’d have extra dough. (I had 19 pieces leftover and used those to make bones as I outline below.) If you want to make all of your hot dogs wrapped up and don’t want extra dough (or are serving a larger crowd), you’ll need extra hot dogs. 2 packs of 8 hot dogs cut in half equals 32 pieces and you’ll have 30 pieces of dough. So that’s closer to the proper amount.

First, I made my own everything bagel seasoning because I don’t have store-bought but do have most of the spices used to make it. (Poppy seeds, black and white sesame seeds, dried minced onion, dried minced garlic, and kosher or sea salt.) At the time I didn’t have black sesame seeds (though you'll be pleased to know I've since acquired some), so I used extra white sesame seeds, and I subbed a smaller quantity of garlic powder because I didn’t have dried minced on hand. It got the job done. The flavor is there. This is the recipe I used as a jumping off point.

Then I got started assembling. 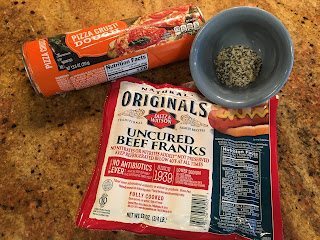 1.     Preheat oven to 425 degrees Fahrenheit.
2.     Cover a rimmed baking sheet with parchment paper. (I enjoy paying overpaying for the convenience of pre-cut sheets. I use Reynolds' 12"x16" sheets.)
3.     Unroll dough onto another piece of parchment and use your hands to stretch the dough to about a 9x14 inch rectangle. I used the parchment as my guide. 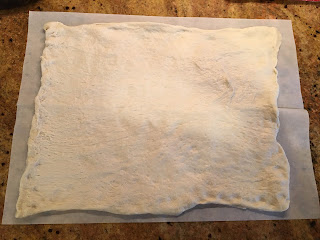 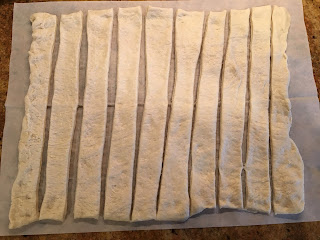 Next, cut the shorter side into three even strips. 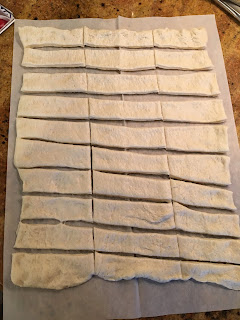 You want about 30 slices of dough. 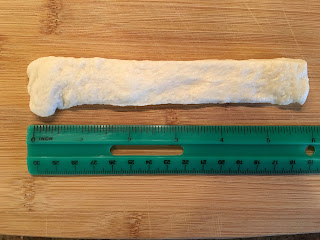 6.     Wrap dough around hot dogs in desired formations.
a.     For Spiders: Cut hot dogs in half (the original recipe suggested cutting them in thirds, but they would have been too small in my opinion, so I went with halves instead), wrap one strip around the center of the hot dog piece so the loose edges end up tucked underneath, and cut 4 leg slices in each side of the hot dog that’s sticking out. 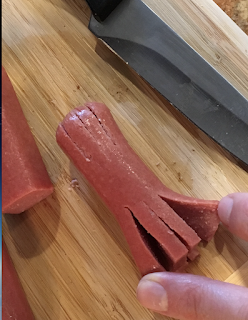 b.     For fingers: Either cut the hot dogs in half or leave them whole. Wrap one strip of dough around the hot dog- it can be sort of haphazard to mimic a bandage that’s falling off.
c.     For mummies: These are easiest if you leave the hot dogs whole. Fold a strip in half lengthwise or roll it so it looks like a longish worm. Wrap around the hot dog so that it resembles the wrapping of a mummy.
d.     NOTE: If you only use one pack of hot dogs (as I did) you will have a lot of leftover dough strips. I made mine into “bone” breadsticks. Simply lay them out and bake as is. If you want to get extra fancy (which I didn’t), cut one of your strips into 6 even pieces and roll those pieces into small balls. Attach two balls to the end of each strip and voila! Bone joint. 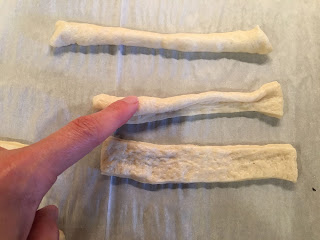 7.     Place on pan.
8.     Lightly beat an egg. Brush egg wash on the dough. If desired, sprinkle with everything bagel seasoning. (I left some unseasoned because I wasn't sure the girls would eat it with that on there. Spoiler alert: they did enjoy it on the bones. My oldest said it needed more salt. Ha!) 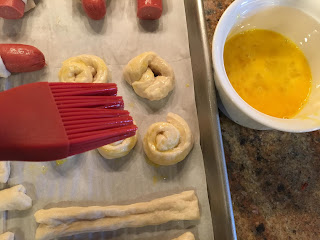 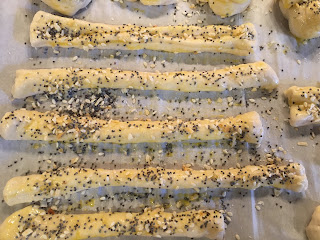 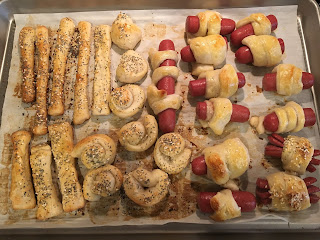 10.  Remove and let cool for a few minutes before eating. (Seriously, trust me on this. The hot dogs are VERY HOT.) 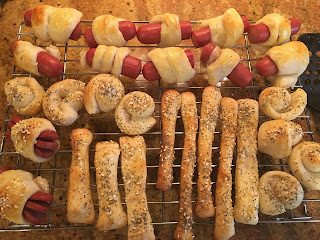 11.  To serve –
a.     For spiders: Use squeeze bottle of mustard to draw a web on a plate. Place at least two spiders on each web. 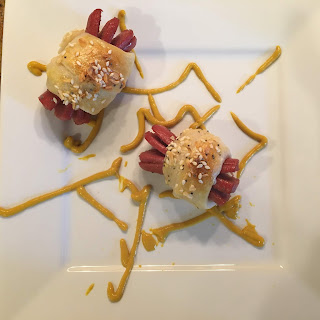 b.     For fingers: Squeeze a pool of ketchup on a serving platter (it’s “blood”) and pile bandaged fingers on top.

Let me tell you, these were a huge hit! I happened to serve them when some neighborhood kids were over playing, and all the hot dogs were gobbled up in no time. My husband remarked how the taste and texture of the pizza dough did, indeed, resemble a bagel, particularly with the everything seasoning on there. Everyone liked the hot dogs themselves, too, and I’m happy to report I did not get a headache. Yay! Boney bonus: the breadsticks were pleasing both fresh from the oven and the next day, eaten with some spaghetti (aka worms).

I’m happy to have finally found a fun Halloween-themed hot dog option that doesn’t result in all the outside dough being discarded and that everyone in our house (plus a few neighbors) can enjoy.

I also like that this would be easily adaptable for, say, an appetizer for a party or on gameday. Skip the spider leg slits and simply wrap the hot dog pieces with the dough, brush, season, and bake.

I hope if you try them, you, too, like everything about them.

**I have no affiliation or relationship with any of the brands mentioned or linked in this post. All opinions and experiences expressed herein are my own.**
Posted by Natalie M at 1:02 PM