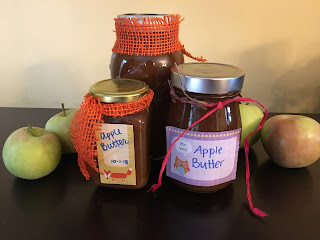 As I said yesterday in my introduction, we went apple picking earlier than normal this year, so I’ve been staring at an enormous bowl of apples for over a week now. I’ve put them in lunches each day and let my apple-obsessed daughter snack freely, but that’s still barely making a dent.

Over the weekend, I saw a recipe for Musselman's apple fritter breakfast bake. It called for 5 apples and some apple butter and croissants—man, I love croissants. I almost never let myself indulge in them, though, because they’re basically flaky butter. Haha. Anyway, because of the croissants, I vetoed the recipe. Later that same day, though, we stopped at Wegmans and I saw a loaf of something called Apple Fritter Bread and I was like, “Yes please!” So I bought it. When I sliced off a piece after dinner, I noticed the inside of the loaf is kind of just a plain brioche bread with all the apple frittery goodness on the exterior. That got me to thinking: I bet I could sub this bread for the croissants and get something pretty similar if I decided to make that recipe.

I opened my refrigerator and discovered…no apple butter. What whhhhaaaaattttt?

Then my gaze traveled over to the apple bowl.

I could make apple butter.

I had a vague recollection of having made apple butter sometime before in these months of blogs. (Turns out I was right: it was October 9, 2016.) But that apple butter doesn’t help me now because I NEED THIS FRITTER BAKE and it needs apple butter and I don’t have any so I obviously need to remedy that situation.

I tried a new recipe, too, because why not? Also because it was about 10 at night when I was having this war with myself and I couldn’t use any recipe that took less than, say, 10 hours to cook in my slow cooker while I was sleeping. Basically.

Turns out apple butter is at its best when it’s cooked low and slow. So that’s how I came to choose this particular recipe from Sugar Spun Run.

It still took me a little time to wash the apples (I scrubbed them with my produce brush because the skins stay on) and core them (I used my handy corer tool) and slice & dice them (it took me about a minute per apple—I know because, yes, I timed myself. Gotta make your own fun when you’re working, people.) But then I set the timer, hit the sheets, and finished the process in the morning. After breakfast, I gave it a whirr with my immersion blender, stirred in vanilla, and let it go for another 2 hours while I went to the gym.

LOVING all the hands-off time involved in this recipe. 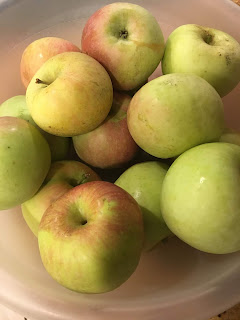 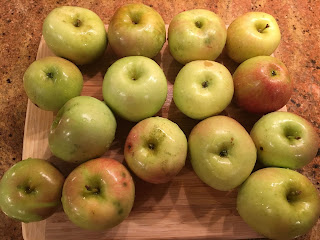 In another bowl, combine sugars and spices (except vanilla), mixing well. Pour over apples and stir well to fully coat.
Cook on low heat for 10 hours. 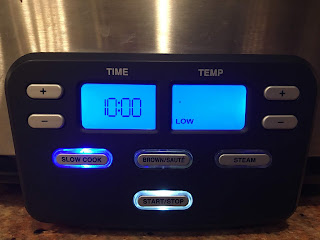 At the end of 10 hours, use immersion blender or food processor to process soft apples until smooth. (I used an immersion blender which was hella convenient. However, because I didn’t want the metal of the hand blender scraping against the bottom of my slow cooker, I transferred the apples to a deep bowl and blended everything in there before transferring back to my slow cooker. It worked nicely.) Stir in vanilla extract.
Leaving the lid off, cook the pureed apples for another 2 hours on low. Stir occasionally. 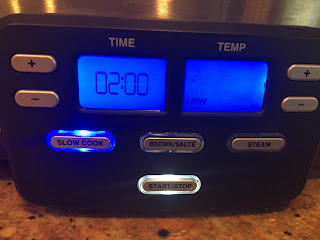 Once finished, allow to cool (I let mine cool 45-60 minutes) before transferring to jars. Refrigerate. 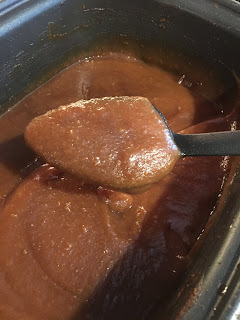 Admittedly, this isn't a particularly photogenic recipe. It goes from being white to brownish to browner to deep brown. But the smell is divine and the taste? Can I just say, WOW? This stuff is perfectly smooth and deliciously spiced and it tastes amazing.

It can be enjoyed spread on toast or with cottage cheese or as a sub for apple sauce in baking or even eaten on its own.

I can’t wait to taste it as part of the inspirational breakfast bake situation. Stay tuned…

What’s more, I used 15 apples from my bowl and it still doesn’t look like I touched them.

**I have no affiliation or relationship with any of the brands mentioned or linked in this post. All opinions and experiences expressed herein are my own.**
Posted by Natalie M at 10:31 AM