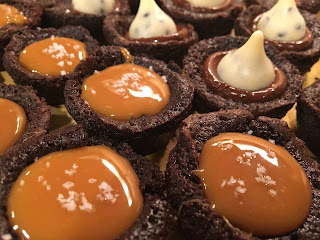 Now that we've finally used up that pesky can of pumpkin on sort of breakfast-y items-- namely these, this, and this-- let's move on to some desserts! My favorite.

Last week I attended one of those paint and sip parties at a local place called the Uncorked Artist. I’ve been so many times I’ve lost count. Typically I’d share a photo of the finished painting on the blog, but I’m not this time because we broke with tradition and did a winter-themed painting instead of a fall one. And that doesn’t fit my countdown to Halloween at all!

However, what I can share are all the tasty treats I made for that party because they most definitely were fitting my theme!

There’s four of them and I’m going to share each in separate posts.

And can I just tell you? People seemed to really love them and several individuals came over to tell me directly, which was gratifying to hear.

All of these treats would be wonderful additions to any seasonal pot luck, party, Thanksgiving dessert table (if you wanted to do a tapas-like bite-sized creations so people can taste lots instead of littles), or, you know, Wednesday.

I'm going to kick things off with the one I created myself which, technically, is both the least involved and the least autumnal to look at. (However, I have some ideas on how to make it more Halloween-themed so I’ll share those later.) But they're chocolate. So there's that.

Even though I’m sharing these first, I made them last. In fact, I started making them around 4pm and the party was at 7pm. That means I conceptualized, mixed, baked, cooled, filled, and plated them in that narrow window. (I also made and ate dinner, helped with homework, and plated the other 3 desserts.) All this to say: they come together quickly and are a great last-minute option.

How do we do it, you ask? We take a little help from a pantry staple: the boxed brownie mix. 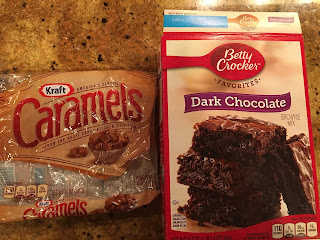 Some people swear by all homemade baked goods. Certainly, they have their place. But there are also some quality, good-tasting mixes out there that get the job done and that’s what I reached for this time.

Side note on boxed brownies: in the summer, I did a side-by-side comparison to test a theory. See, a blogger I love claimed her chewy homemade brownie was far superior to the boxed brownie. For an unadorned brownie, I typically use Ghiradelli’s Double Chocolate mix and it’s GOOD. So I wanted to put that boxed mix to the test. I made a box of Ghiradelli and a tray of the homemade kind. I also made the buttercream icing the blogger puts on her brownies. I left some of both batches “naked” and iced the rest of both. That way, the taste test could be even. And then I started foisting brownies on everyone I met. Just kidding. Only on 9 people, 5 adults and 4 kids. The results? 3 of the 4 kids preferred the homemade brownies. Every adult preferred the box (and all of them assumed the one they preferred was the homemade brownie.) But, that said, both brownies were fantastic—fudgy, chewy, and yum. Given either one on its own, everyone would say, “That’s a good brownie!” Because it was a side by side taste test though, even with subtle differences, the test proved to me that there’s nothing lost by having a go-to boxed mix to turn to when a chocolate craving strikes or a kid comes home needing a treat they forgot to tell you they needed, or whatever happens. The boxed mix could be a dessert saver, as it was for me this time.

Start by preheating your oven to 350. Then prepare brownie mix according to package directions. (Note: even though I prefer Ghiradelli Double Chocolate for a normal brownie craving, when I’m making brownies for a crowd or turning them into dessert like I did this time, I use Betty Crocker because you get more mix for your money.)

Lightly spray or grease your mini-muffin pans. Add brownie batter to about 3/4 full. Bake 12-15 minutes, or until a toothpick inserted in the center comes out clean. 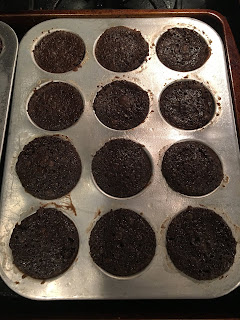 When the brownies are done, remove them from the oven and allow to cool in the pan for a few minutes.

Gently press a half tablespoon measuring spoon into the tops of the still-warm brownies. 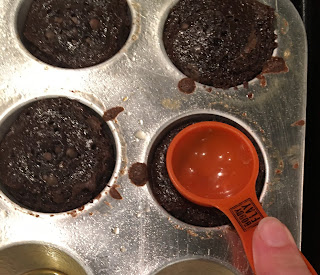 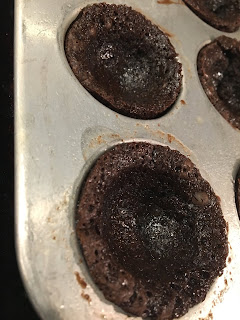 Remove from the pan to cool completely on wire racks. Be careful in this step. Despite greasing the tins, some of my brownies didn’t want to come out. I had to gently run the tip of a paring knife along the edge of some of the cups to help them release.

After the brownies are fully cooled, melt Kraft caramels with some water. (Follow package instructions for melting.) I only used about a third of the bag of caramels. Use a spoon to carefully drop melted caramel into each brownie cup until filled. Sprinkle tops with fleur de sel (sea salt.) 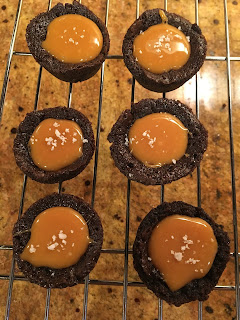 Since my older daughter doesn’t care for caramel, I didn’t fill all of them that way. For the rest, I melted some chocolate chips in the microwave (I used about a third cup of semi-sweet chips) and stirred in 1 teaspoon of coconut oil into the melted chips. Use a spoon to carefull drop melted chocolate into each brownie cup until filled. Place one Hershey Kiss onto the warm chocolate. (I used the Cookies and Cream flavor but any Kiss will work.) 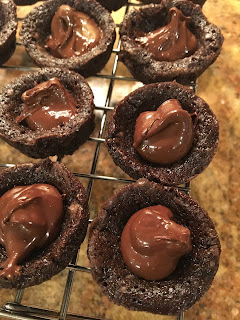 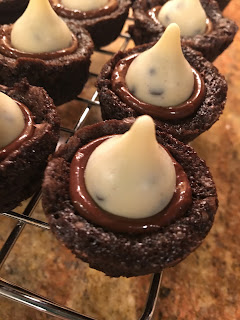 Lovely and tasty. Chewy and gooey. Sweet and salty. All yum. 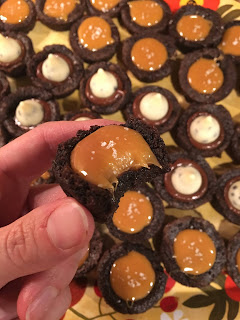 Now, what if you want to Halloweenify these bad boys? Here’s just a few options:

1. Use the same general recipe as above but add a small pretzel stick coming out at an angle (which you can pretend is a stirrer) and sprinkle with round candy quins (they’re the round, flat type sprinkle. If you click on the link in #2, they’re the white, yellow, & orange ones). You can call these brownie cauldrons.

2. Instead of filling the brownie cups with chocolate or caramel, fill them with green-, purple-, or orange-tinted buttercream (or even store-bought icing, though I personally can’t stand the artificial, chemically flavor of those tubs of icing), then sprinkle with Halloween sprinkles(they make cats, bones, bats, and pumpkins, among others).

3. Use the same method as in 2, but fill with red-tinted buttercream and place a Wilton eyeball candyin the middle.

Those are just some ideas off the top of my head. The possibilities are endless, though, if you take some help from the festive gummies and sprinkle options out there. Just take a walk through Target’s seasonal baking area and I bet you come up with 5 ideas of your own.

No matter how you decorate them, they’re a chocolate-lover’s dream dessert. Nobody will ever guess you whipped them together at the last minute. 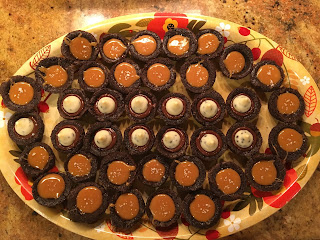 **I have no affiliation or relationship with any of the brands mentioned or linked in this post. All opinions and experiences expressed herein are my own.**
Posted by Natalie M at 10:12 AM