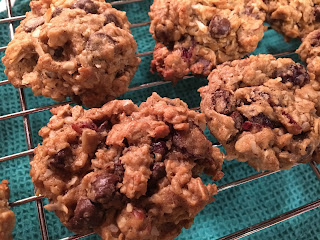 As should come as a surprise to no one who's read my blog in the past, I love cookies. They're probably my favorite baked good. (Though I also love a nice scone. Mmm. Scones.)

As you also may know if you've read many of my baking-oriented blogs in the past, I have a favorite baking blogger. This woman knows her cookies! Of course I'm talking about Sally from Sally's Baking Addiction. I love her recipes because they're reliably tasty and easy to follow. (And her food photography, unlike my own, is beautiful!) As a matter of fact, Sally just released her third cookbook--all cookies!!!-- and today's treat comes from that. There's at least two others I have my eye on for this month, and of course several for Christmas cookie season. Do yourself a favor and get yourself a copy of Sally's Cookie Addiction!

(Do it now, in fact, since copyright laws keep me from publishing the actual recipe here.) However, don't worry--I can tell you how I made them.

And by "them" I mean these beautiful autumn spice oatmeal cookies, full of oats, butter, brown sugar, warm cinnamon, pumpkin pie spice, a touch of molasses, and delicious mix-ins like coconut, dark chocolate chips, dried cranberries, and pecans. (Full disclosure: the original recipe called for pepitas but I happened to use up what was left of mine when I made this pepita hummus.)

So here's the process-- in pictures, naturally. (And sorry for the shadowy nature of some of them. I do a lot of my treat making in the afternoon/evenings when the natural light is not great. This particular photo shoot was ridonkulous! You should have seen me balancing the phone flashlight off to the side of the mixing bowl but moving it until there wasn't too much shadow before snapping my photos with my digital camera. Yikes. Such an amateur!)
I halved the recipe because, let's face it, there's a lot of baked goods making their way out of my kitchen this month and it's too much to eat. Even my half batch of these made 22 cookies! (Mine were sliiiightly smaller than the recipe because it called for using a 2 T scoop and I used a 1.5 T scoop but let the dough heap out of it.) I brought some to Starbucks to share with the baristas and they were a hit! Sharing is caring, people.

As for the ones we still have here, I've enjoyed eating mine as dessert, breakfast dessert (what? is that not a thing where you live?), and a snack alongside a mug of warm chai.

Speaking of which, next time I make them, I'm adding extra dark chocolate chips (because those bites were my fave bites) and stirring in some cardamom. MMMMMMMMM.

Anyway, that's all for today. Don't forget your two jobs for right now: buy the book & make these cookies. Because COOKIES.
Posted by Natalie M at 1:06 PM