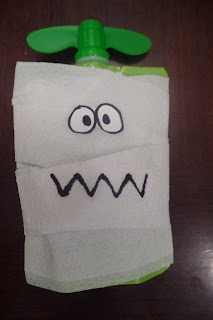 When I went to bed last night, I was planning a big apple extravaganza for today. I was going to start off making some apple fritter pancakes and then bake a bunch of apple pies to share.
But, as Burns pointed out in "To a Mouse," "The best-laid schemes o' mice an' men / gang aft agley."

In other words, so much for that!

I abandoned the pancakes for the day; and, while I researched & acquired some pie-supplies, I baked nothing. Oh well.

My older daughter invited two of her besties over for the afternoon and she requested a craft. So I set out some foam Halloween shapes and foam stickers and let them do their thing. I also just so happened to have three wooden headstones that I bought a few years back for a family craft that, uh, we never got around to doing. (See above re: ruined plans.) In any event, it turned out to be a good thing because there were enough so they could each do the activity.

Because I'm me and can't turn off the English-teacher gene, I gave them a teensy mini-lesson on funny epitaphs. Rather than executing a full-out lesson like I wanted to do (but suspected they would not want me to do), I printed out this little tutorial from poet-for-kids Ken Nesbitt's website and supplied it to them with their paints and wood. I'm pretty sure they only scanned it but they clearly read enough to create some rhymes on their tombstones. Which made me smile.

I also served them some green toes to eat. Which made them smile. So it was all good.

After dinner, while I was prepping lunches and snacks for the week ahead, I decided to try a simple yet fun activity I pinned last year from The Nerd's Wife blog. Basically, it's wrapping up a squeeze pouch of apple sauce to look like a mummy. 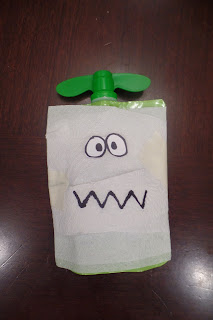 I used her concept and personalized it to fit materials I had on hand--that is, I think she used crepe paper but I just cut up a napkin to achieve the same effect, and I did my googly eyes freehand on a post-it note and just cut it out and taped it on there. (Though, now that I think of it, I could have drawn those right on the wrap when I was done, just like I did with the mouth.)

It was simple and didn't take a long time and I think my younger daughter, the applesauce eater in our house, will enjoy finding it in her lunchbox tomorrow.

And I can go to bed knowing I didn't *completely* abandon the apple plan for today. Um...yeah. (See Pouch Face above. LOL)
Posted by Natalie M at 8:35 PM