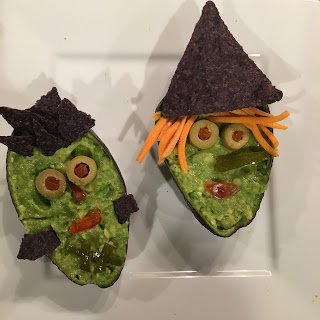 Last night was the season premier (and 100th episode) of AMC's The Walking Dead. My husband and I never miss an episode, and my cousin has joined us in our family room for most of those episodes. Recently, he got engaged and last night his fiance came, too. Woo hoo viewing par-tay!

My husband always makes us a festive beverage for premier night and last night's was so good, I made sure to jot down his recipe to share on here. (Which I'll do tomorrow, so check back.) My previous beverage post has gotten a lot of views, so I'm thinking you guys like a good drink recipe. I've got you covered!

For snacks, my husband typically makes popcorn (his homemade popcorn is legendary. People love it. He air-pops the corn and then tosses it with butter, garlic salt, and pepper. It's really good.) and sometimes we heat up tacquitos or mozzarella sticks or poppers or potato skins.

As it were, oddly enough, we didn't have any of those items last night.

Instead I served up a tray of sweets - Frankenfaces, some decorated cookies, and a witch hat dessert (both of which I'll share on Wednesday) - and today's featured item.

I'd seen a photo earlier in the day and as soon as I saw it, I knew I wanted to replicate it for premier night. Plus, these are single-servings so each person can have their own portion of guacamole and double-dip to their heart's delight.

I was happy with how these turned out and not only were they novel, they were tasty, too.

They're so simple that I'm not even posting a true "recipe" - I'll show you in photos what I did and point out what I used, and you can do your thing. (I also linked the inspiration post for this in the decoration step. She outlines what she used for each specific face if you need further direction.)

You'll need one avocado per two "faces." Also, a squeeze of fresh lime juice, some matchstick carrots, red peppers, pickles (which aren't in the photo below because I decided to use them while decorating), and green olives. (Other things you might use: orange or yellow peppers, black olives, sour cream, small slices of cheese sticks (cut so they're flat rounds), tomatoes, cucumbers, even broccoli.) You'll also need blue corn tortilla chips. 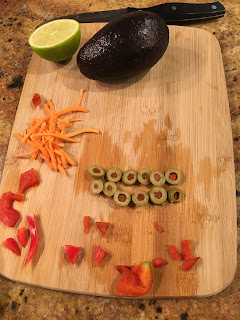 Start out cutting the avocado in half, then use a spoon to scoop out the fruit. Set the skin/shell (what the hell is that thing called??) aside because you'll be adding the mashed avocado back in there later.

Squeeze some fresh lime juice on top (this not only adds freshness and flavor, but it keeps the avocado from browning), then sprinkle with a little garlic powder, onion powder, salt, and pepper. Then mash that bad boy with a fork. 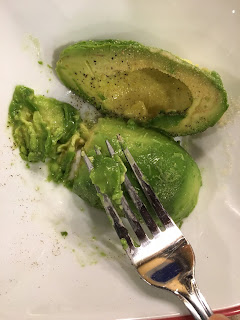 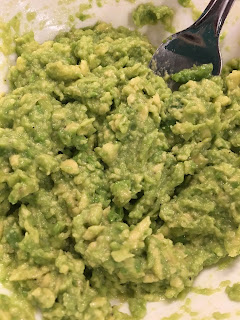 Then scoop it back into the reserved peel/rind/outside barrier thingie and smooth it down with the back of a spoon. 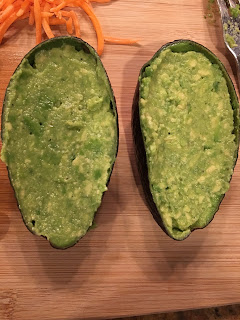 Then decorate. Use vegetables and chips to create the faces and accessories. Cut the veggies and break the chips as needed. I worked from a photo I saw on the Fork & Beans blog post.  Her faces were really well done-- I especially liked how she did their little mouths. haha. She also used some stuff I didn't use (for instance, she made her eyes from small rounds of string cheese topped with black beans, while I decided to use pimento-stuffed olives for that.)
Then arrange one face on each plate and serve with tortilla chips. 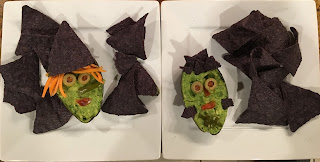