Recipe 13: Spicy Zucchini Soup starring The Zucchini Who Didn't Want to be Eaten

Over a week ago, my husband went outside and harvested the most ginormous zucchini I've ever seen in person. A few weeks ago I thought the one as big as my five-year-old's arm was big. Turns out that was a baby. This one weighed in at nearly 4 pounds and was bigger than my forearm. (Don't believe me? See photographic evidence below.) 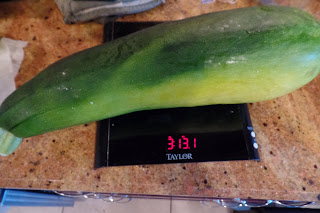 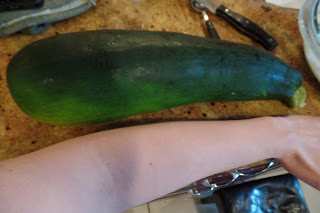 Bigger than my forearm

I was excited at first because I had a recipe for zucchini ravioli in my Recipes to Try files. The recipe called for four medium zucchinis which were to be layered two side-by-side in a cross pattern, filled with ricotta cheese, then folded over each other. I thought, "Hmm. The width of this one zucchini is the same as the width of the two side-by-side, so this would work well as a substitution." I also considered a zucchini lasagna because it's as long as the lasagna noodles. I cut off the ends, cut that bad boy in half lengthwise, and scraped out the seeds (which were, not surprisingly, quite large). Then I endeavored to cut the zucchini in strips. The recipe from which I was working said to use a vegetable peeler to slice the zucchini strips. Long story short? That didn't work. The zucchini was way too big (even when I quartered it) and the slices were way too thin. I gave it up and put the zucchini in a bag in the crisper drawer to use another time. (That day, I ended up using no-boil lasagna noodles to make a more traditional lasagna.)

A few days later, I had a recipe for a grilled chicken parmesan with a side of spaghetti. I decided I'd serve zoodles as the side dish instead. Unfortunately, the zoodle-making contraption I own didn't want to work with the size/shape/now-seedless pieces of zucchini I had on hand. So zoodles were out. Maybe I could shred them? Tried it, but for a side dish, the shreds were too short and moist. UGH. That time I ended up using only one wedge which I chopped and tossed with some homemade marinara and garden-fresh tomatoes.

I considered returning once more to a zucchini bread recipe, but then remembered this spicy zucchini soup recipe I had saved in Pinterest.

Everything seemed to go well enough as I made this. I thought I'd finally struck upon the perfect recipe for the gargantuan zucchini. Until I tasted it to check seasonings.
Oh. My. God.
So spicy. SO SO SO SO spicy. Like, my lips were burning for ten minutes after I had the teeny-tiniest little taste spicy. Like, I had to drink a glass of milk to neutralize the fire on my face spicy.

In fairness to the recipe creator at Simply Recipes blog, the original recipe called for only half a jalapeno. (In the recipe I typed out below, I kept her original amount there.) I foolishly used a whole jalapeno. So I don't blame her. I blame myself. Because I ignored Lesson One of Jalapeno 101: taste the jalapeno prior to adding it to the recipe. I should know this. Nay. I DO know this. The spice level between jalapenos varies so greatly it's like jalapeno roulette when you cook with jalps. It could be super mild and taste no spicier than a regular green pepper. It can also burn your face off. There's no way to know until you taste it. But I didn't bother trying it before adding it. (Though I still took the time to don a baggie on my hand to protect my skin from any potential heat...) Then I simply tossed it right in there.

And ruined my soup. It's far too spicy to serve to my family.
Which brings me to the very distinct possibility that this soup will end up down the drain unless I can tame the heat. In which case, I'm convinced this monster zucchini has it in for me for eating all of its family and friends.

I have taken to the internet to see if there's any way to salvage my dinner. I found this source discussing six ways to tone down the spice in a dish.

Here's the base recipe. You can take a peek at this while I see what I can do.

4 Tablespoons olive oil
1 onion, chopped
1/2 jalapeno (more or less to taste depending on your spicy preference), seeds, stems, and ribs removed - (NOTE: Taste the jalapeno prior to adding it to your recipe to establish the heat level of the jalp with which you are working)
3 garlic cloves, chopped
2 pounds zucchini, chopped (about 5-6 cups)
1 1/2 cups chopped day-old bread
4 cups chicken broth (original recipe called for 3 cups plus 1 cup water; I had a 4 cup container of chicken broth so I just used it all and skipped the water; you could also use vegetable stock)
1/2 cup fresh mint leaves, loosely packed, chopped
2 teaspoons lemon juice
salt and pepper 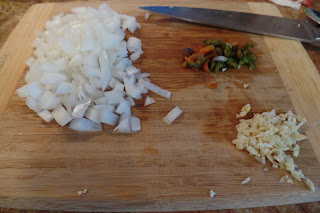 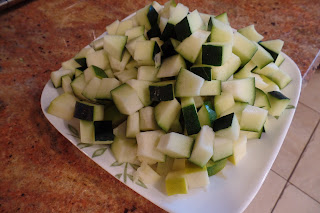 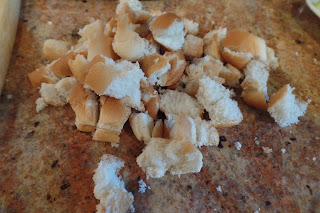 Bread (originally bought a nice baguette to use for this, but it got so hard I had to toss it.
Oy. All sorts of problems. Thus, I substituted 2 hot dog rolls.)

1. Heat olive oil in large pot over medium-high heat. Add onion and jalapeno and saute for 5 minutes, or until onions are translucent but not browned. 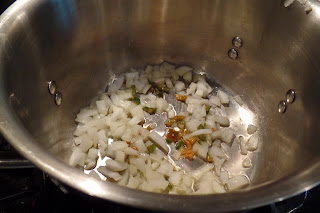 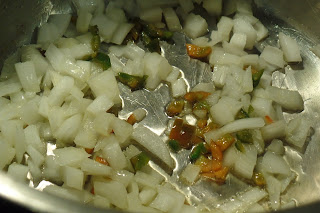 2. Add garlic and zucchini and saute for another 4 minutes, stirring often. Sprinkle with salt. 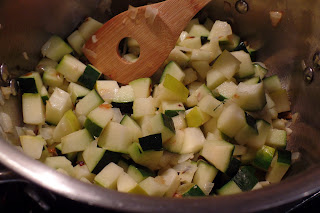 3. Add bread and broth. Bring to a boil. Reduce heat and simmer for 20 minutes. 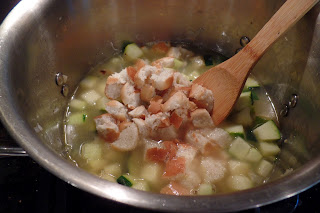 4. Remove from heat. Allow to cool slightly. (While you can skip the cooling stage, I don't recommend it because the steam builds up so much in the blender when you go to blend it that you have to really put some muscle in holding the lid in place--with a towel!--when you turn on the machine, and even then you might still get some over-spill. It's so much better to work in smaller batches and give the mixture time to cool down to get that HOT steam out of there.) Add the mint. Puree in a blender or food processor until smooth. Work in batches if necessary. (I did mine in the blender in two batches.) You could also use an immersion blender. 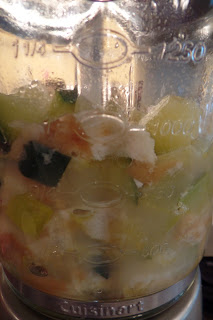 5. Return soup to the pot. Add lemon juice and salt and pepper to taste. 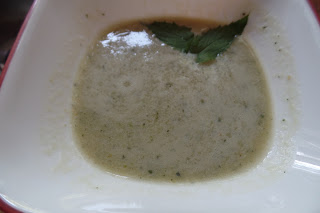 I'm back from Operation: Fix-My-Soup. I decided I would try adding a tablespoon of almond butter to my soup to see if that would help matters. But after I tasted it first to have a fresh basis for comparison, I felt rather surprised to find the soup...not all that spicy.

That's so strange because it was horrific when I last tasted it and <eyes zero in on spoon I used to taste it last time> OH. That was the spoon I used TO SCOOP OUT THE JALAPENO SEEDS so it's covered in hot, non-diluted jalapeno juice! No wonder it burned my lips.

I could, of course, take advantage of the fact that there's a delete button on here and back-space the whole section above about how I ruined my soup by adding the full jalapeno without testing the spice level. But I'm going to leave it.

1. It's still a valuable lesson about cooking with jalapeno.
2. It's a valuable lesson about the dangers of using random utensils sitting around on one's counter.
3. It's sort of hilarious in a I-can't-believe-I-did-that way. No sense in denying others a chuckle at my expense. I may cook a lot, but I still make lots of mistakes and encounter plenty of kitchen mishaps.

Anyway, now that it turns out that the soup is the appropriate level of spicy, I ate some. I thought it needed something. My husband suggested bacon on top. I tried it. I approve of that solution. It added a nice textural component as well as a pleasing saltiness.

I liked the fact that the soup could be served warm or chilled. We had ours warm, but I tasted it chilled and wasn't offended.

The girls wouldn't eat any of it beyond the one bite I made them both taste. Those two are pretty much completely over all zucchini-based foods. Luckily for them, so am I (for the most part). Plus, our zucchini plants developed an illness and stopped producing fruit for a while. We trimmed them back and they appear to be regenerating as I harvested a small zucchini and squash today, but for the first time in nearly two weeks.

Ergo-- there may be another zucchini recipe. There may not be. But if this is the last one, at least I ended things on a dramatic note. Ha!