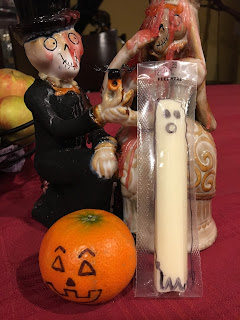 Today was another one of those hectic, must-complete-the-to-do-list days.

I didn't have a lot of time to spend on any one activity, but I managed to add a bit of whimsy to a few different things.

My husband, who was under the weather today, requested toast while I was unpacking groceries. So I served him this to reflect how he felt. 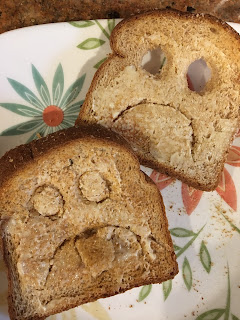 Later, as I prepped school lunches for my kids, I grabbed a Sharpie and added some extra Halloween-ish touches to give them a chuckle. 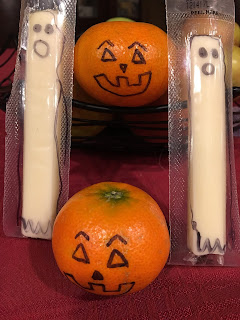 As our dinner did its thing in the oven, I tried turning my attention to dessert.

I settled on caramel apples, and opened the whole bag of individually wrapped caramels and readied my pan to melt them after dinner. By the time I'd eaten, though, I didn't actually feel like undertaking the process. For one thing, with my husband being sick, he won't want a caramel apple for at least a few days. And my older daughter doesn't even like caramel (I know; I can't believe it either) so she won't want one ever. So I moved the caramels out of the pan and into a jar to use them another day.
Even though I no longer planned to make caramel apples, however, I still felt like eating one. Thus, I modified the process and made myself one in under five minutes.
Instead of heating the caramel on the stove like I usually do, I microwaved it. I put it in for only one minute (the heating instructions for the whole bag said 2.5-3 minutes so I thought 1 would be about right). Turns out that was too long. The caramel got little scorched pieces in it. Luckily, it tasted perfectly fine and since I was the only one using it, it didn't matter that it looked weird. (Well, except for the photo I took to show you.)

I sliced up one apple and dipped it into the melted caramel. Then I laid them on a sheet of waxed paper and sprinkled coconut and peanuts on the slices. 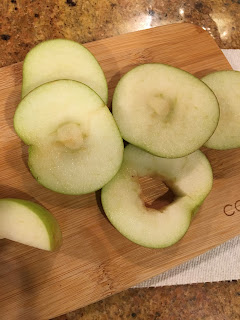 I didn't bother refrigerating them to let the caramel harden, so, admittedly, the part that was resting on the waxed paper remained there when I lifted my slices. I used a knife to scrape it up and spread it back onto the apple again. (The negative of cutting your apple and trying to dip it is that the dip doesn't want to remain on the moist apple flesh for the long haul. So next time I might just dip the slices as I'm about to eat them, so as to avoid the caramel sticking to the waxed paper, or I'll be less impatient and give it 10 minutes to set up in the fridge before digging in.)

Nevertheless, even though it was a messy undertaking, it sure did hit the spot!