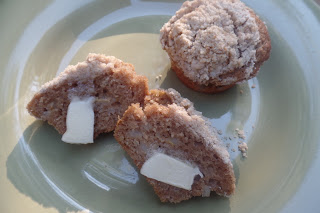 I've been going on a lot about apples.

But--shocker!--apples aren't the only fall fruit out there. There's another tasty option that, I think, doesn't get nearly enough attention: PEARS.

Let's talk pears a sec. What's your fave kind? Mine is Bosc. They're ugly and brown on the outside, but I love how nice and crisp they are inside. Mmm. I also enjoy those cute seckel pears. Another crisp variety, no less. That crunch is important to me. And while I like sweet things, I prefer pear varieties that are not super duper sweet or overly juicy when ripe. 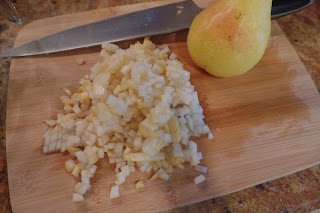 Speaking of sweet things, there's a ton of apple desserts out there, but not as many pear ones. It didn't even occur to me that anything was lacking until I happened upon a recipe for a pear-based muffin and was all, "Oh yeah! What a smashing idea! Why aren't there more pear options?"

My older daughter was on a muffin kick at the beginning of the school year, so I'd started making mini-muffins for her to take for snacks or grab at breakfast. In fact, I'd originally planned to do these as mini muffins, too, but I asked her if she wanted mini or full-sized and she opted for the full ones. You could do either, but if you go mini-muffins, your bake time will change. (Most of my mini varieties bake at 375 for about 12 minutes, but you need to watch them.)

I followed the base recipe mostly as written, but made an adjustment to the actual bake time and temperature based on muffin tricks I've picked up along the way (namely, blast them for the first 5 minutes at a high heat - 425 degrees-  then, leaving the oven closed, lower the heat to 375 for the remaining cook time. This technique helps give that muffin-y dome shape on top because it puffs up before baking through.) I've had great success with that method pretty consistently, so it seemed like a good way to go.

Secondly, I added a streusel topping for extra pizzazz. I made the mistake of testing out a new streusel recipe I found online (because I was too lazy to walk ten feet to grab one of my favorite cooking resources--my Sally's Baking Addiction cookbook--and because I hadn't yet discovered the delight and ease of the crumb topping from these pies!) and I was punished for it.) The recipe I used was a dud so I'm not listing it here. But don't worry--when I share below so you can make them yourself, I'll include the recipe I should have used.

Once more, you get to learn from my mistakes.


Anyway, let's talk results. How were these muffins, you ask?

When you bite into these--and I tasted them at two different stages: hot outta the oven, and cooled to room temperature--the warmth of the cinnamon spice is what struck me most. I was surprised, and a little bummed, to discover the flavor isn't significantly pear-forward. Rather, the pears hang out in the background and seem to serve more as a moisture-enhancement. That said, I still enjoyed the flavor and definitely preferred them when they'd cooled a bit. In fact, they seemed to get better after a couple days on the counter.

My girls were also fans and remarked that the flavor reminded them of my baked donut recipe. Which makes sense because that batter uses many of the same dry ingredients as these muffins.
As for the streusel/crumb topping, my instinct to add it was a good one. I'd definitely urge you to put a topping on there. Because streusel!!! However, as I indicated before, I wasn't a fan of the streusel recipe I tried. The ratio of flour to sugar and butter was way off (too much flour, not enough sweet buttery deliciousness.) But, again, don't worry--I'm giving you the recipe for GOOD streusel instead of the sad recipe I tried, so you're covered!

They are moist from the pear with a tight crumb. They stayed moist (at room temperature) throughout the week.

I'm kind of bummed because the fool-proof dome-top muffin cooking technique didn't work on these the way it has worked on every single other muffin I've ever made. One or two of my muffins got the domed top the way they should have, but the others only got partial domes and then sort of  spread toward each other on the pan like they wanted to have a friendly muffin group hug. Oh, and the streusel stayed mostly where I'd spooned it on top, so the sections of the tops that went out for the hug did so sans topping. 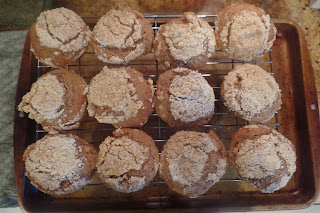 Here you can see how there are parts of the muffins without topping-
that's where they spread outward.
Also, you want your streusel to be chunkier. Mine was too powdery from too much flour.

As to the spreading, any number of factors can cause something like this to happen: over-mixing, using expired leavening agents, an overly-wet batter, giving it the stink-eye. So I don't know the exact root of my issue, but I do want to partially blame that crappy streusel. (Come to think of it, maybe the spreading sections weren't trying to hug at all. Maybe they were trying to run away to get more butter and sugar to fix up that streusel. Hmm. I may be on to something here.)

Anyway, here's the recipe you should use:

1. Preheat oven to 425. Prepare a 12-cup muffin tin by greasing each well or lining with paper liners. Set aside.

2. Make streusel topping. In a small bowl, combine sugar, flour, and cinnamon. Cut in the cold butter with a pastry blender, 2 butter knives, or your fingers until coarse crumbs form. Set aside.

4. In a small bowl, whisk together eggs, milk, oil, and vanilla. 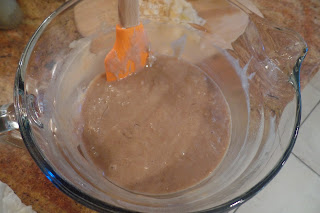 6. Fold in the pears just until combined. Again, do not over mix. 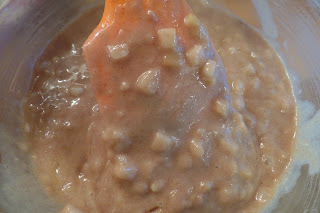 Here you can see the pretty pears in the batter.
7. Use a large OXO scoop to fill each muffin well to the top. (It's ok to fill them this high because the high initial temperature will puff them up.) Spoon streusel topping on top of batter. 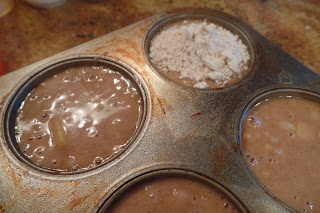 8. Bake at 425 for 5 minutes. Then, leaving the muffins in the oven, lower the temperature to 375 and continue baking for another 18-23 minutes, or until a toothpick inserted in the center comes out clean. (Mine took 23 minutes.) Let cool in pan for 5 minutes before removing to a wire rack to cool completely. 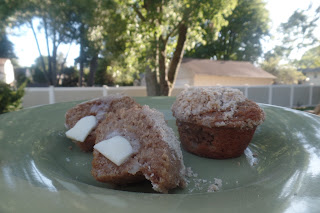 The full muffin on the right got a nice dome.
The cut one on the right spread more, as you can see from the portion extending out toward the bottom of the shot.

As a rule, muffins are best enjoyed the day you make them, but can be stored in an airtight container for up to 5 days. Like I said, these kept well on the counter for those days.