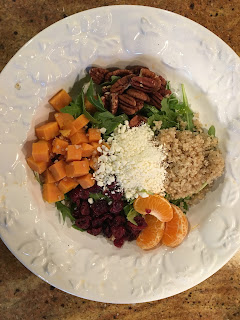 I was craving a hearty lunch today--something wholesome and good for me, but packed with flavors and textures. I thought of a salad I've gotten a couple times at a tea house and used that as my inspiration.

Mine starts with a base of arugula -- I love that peppery bite it has -- and is topped with a little bit of everything. Feta cheese for salt, pecans for crunch (not to mention their health benefits), dried cranberries for sweetness and chew, quinoa for protein and fiber, and sweet potatoes because sweet potatoes! Then I drizzled it with just a touch of extra virgin olive oil, a squeeze of orange, and a dash of salt and pepper.

(The one from the tea house is served with a lemon vinaigrette, but since I bought a bag of those clementines last night at the market (which I spooked up for my kids' lunches today) I thought that would offer a lovely citrus option instead. I was right.) 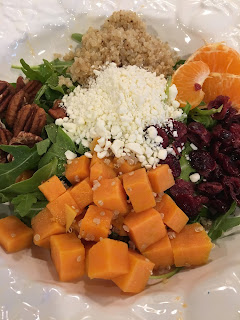 It was everything I was hoping it would be!

Mine came together in under five minutes because I had everything pretty much ready to go. (And I was lazy with the pecans. Generally, toasting nuts enhances both the flavor and crunch of them, so they would have been even tastier toasted. I enjoyed them raw, but admittedly might have enjoyed them even more had I taken another 7-10 minutes to toast them.) This would also have been lovely with walnuts, pistachios, cashews, or almonds. Use your favorite nut or leave it off entirely if you're not a fan.

I prepped the quinoa and sweet potatoes a couple days ago when I was cooking dinner, and I stored them in a container in my fridge so I could use them as needed throughout the week.

If you've never had quinoa on a salad, I highly suggest it. It adds an interesting textural component plus added protein, vitamins, and fiber. It's a nutritional powerhouse (and, apparently, naturally gluten free!) Truthfully, it's my favorite way to enjoy quinoa. Plus, it takes less than 15 minutes to cook. Use a 2 to 1 ratio of water to quinoa. Bring it to a boil, then turn down the heat, cover with a lid, and simmer for 10-12 minutes until the water is absorbed and the quinoa sprouts its little tails. Done and done.
As for the sweet potato-- I peeled and diced it into small 1/4" cubes about the size of, well, dice (which is probably where the term comes from, now that I think of it.) and then steamed them for 10 minutes. I put my steamer basket over a pot of boiling water and covered it with the lid and bam! Tender in no time.

I'm so glad I planned ahead because YAY to hearty, delicious, healthy, beautiful salads! To make it even *more* fall-inspired, I could have added some sliced apple or pear to the top, but I didn't think about that until I was sitting at my kitchen table in front of the basket of apples. Ha! Next time. 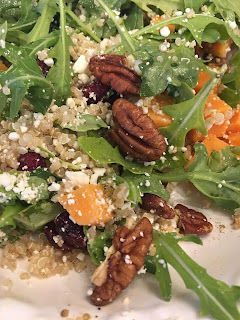 Anyway, give this one a try. It hits all the right notes and will keep you satisfied for hours.
Posted by Natalie M at 7:08 PM