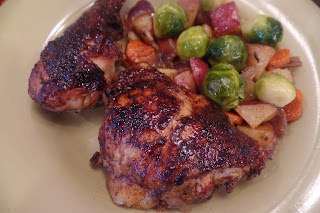 (Disclaimer: that entire opening line is misleading, because A. I'm not from the south and never use the phrase "y'all" in my day-to-day dealings (and, if I'm being honest, don't prefer the term), and B. Today's recipe features chicken and not turkey. Therefore, I can't rightly explain why I began that way, except to say that I've found that, when reading other people's blogs, a lot of them seem to address their audiences as "y'all" so either I happen to follow a lot of southerners or it's, like, a blogging thing. (Another, which also throws me each time I read it, is when someone writes, "You guys?..." which always brings to mind this song from Legally Blonde: The Musical.) Either way, whenever I sit down to write a post, the phrase "hey y'all" plays in my head much the same way certain other words or phrases manifest in particular scenarios. (Case in point: any time I've over-indulged in food or drink and it causes me indigestion, I channel my inner Cher and sing the opening bars of "If I could turn back time" and then proceed to change the next line of lyrics to some variation of how I wouldn't have consumed whatever thing is presently afflicting my stomach. Fun fact about me.)

Anyhoos, now that we've got that out of the way, let's actually talk chicken.

An espresso-balsamic roasted chicken to be more specific.

I'm sharing it in my countdown because when I see roasted chicken and root vegetables and coffee (a cool-weather beverage if ever there was one), I think FALL. (Plus, I share so many sweets, it's nice to offer a savory every now and then.) This is a good one to make on the weekend when you have extra time to sit around sipping a glass of red while it roasts, or even for company. It's sure to impress--it looks gorgeous and the glaze on that chicken is da bomb.

Back when that phrase was still in vogue (i.e. way back...) I found this recipe in a Good Housekeeping magazine. Though I immediately ripped it out and stuck it in my stupendous hard-copy binder of "meals to try," I never did until now. (But, ooh, guess what? I just googled it and it's posted online so I don't have to retype it! Holla!!!)

Not to worry: I'll do my famous photojournalistic walk through my process because that's fun times.

I followed the recipe for the most part with a few minor changes. First, I used fresh oregano on my vegetables instead of dried because although our regular summer garden wasn't as big a producer this year as last, my herb garden overfloweth. And it turns out, fresh oregano is THE BEST THING EVER. (Seriously. I hate dried oregano but adore it fresh. Who knew?) I stuck with the dried stuff in the glaze, however, because it's reducing down and I didn't want fresh globs in there. Secondly, I used an coffee rub I had on hand instead of the instant espresso powder. (Because in my life I've found instant espresso powder to be among the most elusive ingredients in the history of my existence. I don't know why, but I can NEVER find it anywhere.) Thirdly, I cut my potatoes smaller than 1-inch chunks. Mine were more like 1/2-3/4 sized because I find that potatoes take forever to cook through. (In fact, as a rule, it's not a bad idea to pop cut potatoes in a microwave-safe covered bowl and steam nuke them for 5 minutes prior to putting in the roasting pan. I didn't this time, but I should have. It just removes some of that rawness so they can slow roast the rest of the way.) Finally, my supermarket apparently only stocks bionic chickens because I couldn't find a cut up chicken weighing in at under 6.5 pounds so I used a pack of drumsticks and a pack of thighs to make up the 3.5 pounds of chicken I needed for the recipe.

The recipe directions, as written, were clear and mostly accurate. Except the cook times. Mine took way longer than they described. Here's what I did:

I roasted for 30 minutes (instead of 20) before glazing the chicken for the first time. After the first glaze, I roasted it for 20 minutes again. Then I brushed it a second time and roasted for 10 more. Then I used my thermometer to get an internal temperature reading and though it seemed to register 165 degrees at the thickest part, some pieces weren't done in some spots (especially the areas that had been nestled nearest the veg and some parts near bone.) So I took it out of the roasting dish and put it on a foil-lined pan and roasted it for another 15 minutes. At that point, it was tender and cooked inside and the skin had developed a nice crispy texture.

Oh, and I just remembered: at the end, while that chicken was finishing up on the pan, I randomly decided to make one of the packs of frozen Brussels sprouts I keep on hand for days my husband craves sprouts (believe it or not, these people exist in the world and live among us!) Then I mixed them in with the rest of the veggies. They were a surprisingly pleasant addition to the meal and added a lovely touch of green to an otherwise monochromatic dish. You can add them in or leave them out--it's up to you!

For ingredients and directions: Go here! 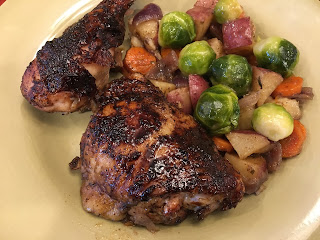