October 12: Apple Crumb Pie, and How To Bake in Aluminum Tins 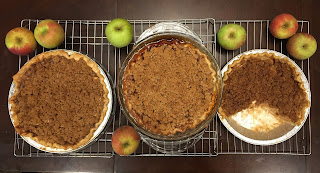 Holla! It's National Pumpkin Pie Day! So I bet you know what recipe I'm sharing today.

What? Pumpkin pie? NO. Don't you read my blog? You know pumpkin is not my #1. It's closer to, like, #8, and that's only as a pie and with Nutella swirled in. (After pecan, apple, coconut cream, blueberry, chocolate cream, a quality lemon chiffon, and peach, if you were wondering.) As an overall flavor? Well, we've been through this. Unless, of course, it's on this Chex mix. In which case, mmm.

Anyway, no. Not pumpkin.

Which, I've discovered, I like even better than classic apple pie. Know why? Because "crumb" rhymes with "yum." Again, HOLLA!

I'm in a good mood today because it's finally seasonably cool outside (though it's also raining which is not great for food photos--sorry for that!) and because I'm finally getting around to making all these apple pies I've wanted to make for days now. Aaaaand because I may or may not have figured out a way to eat pie as breakfast.
Typically, when I bake apple pies--well, really, any pies-- I bake one or two and they either stay at my house or travel with me to a location where I will be able to take the empty pie dish back home with me. (i.e. my mom's, my in-laws', or an event I'm attending.)

That can be limiting, though, since there's a whole lot of other people and places in the world with whom you might like to share some pie goodness.

I thought, "Oh, I know! I'll just buy some of those disposable aluminum pie pans and then give those away!" Easy, right?

I had a hunch that baking in those would require some tweaks to the process. So I took to Google to check on my theory. Turns out, I was correct.

Most baking sites strongly urge against using those tins at all. Why? It has to do with heat distribution. Basically, the crust doesn't cook through. Nothing like raw pie dough to ruin your fun, amiright? Still, I found a couple sites that said that if one absolutely must use an aluminum tin, one should place it on a cookie sheet that has been preheating in the oven AND bake the pie for 10 minutes longer than the suggested cook time. Somewhere else, I read that placing the aluminum tin into a glass dish during baking will distribute the heat as though the crust were directly in the dish itself, but can be removed after baking.

The thing is, I saw these two isolated tips without much corroboration, so I was nervous to take them as gospel. Because if these were THE WAY to do this, wouldn't they be all over the place? Therefore, I decided to crowd source the question on a Facebook baking group to which I belong. There's over 3000 members and only two people answered my question: one to advise me to go to Goodwill to purchase inexpensive pie dishes (i.e. don't use the tins!) and the other who said she places hers on a pizza stone or places it inside a preheated cast iron pan.

I realized I'd need to do a test run to figure this out--not just for myself, but for gift-giving bakers everywhere.

I combined both methods I'd read about and modified my cooking temperatures (hotter oven at the beginning, then bump it back for the bulk of the cooking) as per something I saw on Sally's Baking Addiction's Apple Crumble pie post and came up with something that worked very well.

As for the pie recipe itself, I mostly used my own classic My Award-Winning Apple Pie recipe, but instead of using a top crust, I made the crumb (for which I used Sally's crumb recipe).

I made one "test" pie last night before bed, and I just made two more which I must retrieve from the oven after I finish this sentence. BRB.

I'm back. And omigod, those pies are bubbly and smell like absolute heaven!

Now, where was I?

First, I highly recommend visiting my old My Award-Winning Apple Pie post for tips on things like peeling, coring, slicing, crimping, covering the edge with foil, and the like. I address them all in there!

Now to the apple crumb.

Apple Crumb Pie - for use in disposable aluminum tins (for gift giving!)

4-5 medium apples (about 2-2.5 pounds; I used a combination of winesap and jonagolds because that's what we picked this year at the orchard)
1 Tablespoon lemon juice (the fresh stuff, not that abomination in the bottle. If you're allergic, it's okay to leave it out. Otherwise, put it in. You can't actually taste the lemon when cooked, but it brightens up the flavor of the apples, plus cuts back on apple oxidation, aka, turning brown before baking.)
2 Tablespoons all-purpose flour
1/2-3/4 cup white sugar (this amount is dependent on how sweet your apples are and how sweet you like your pies. I always taste my apples as I'm slicing them to determine how much tartness I need to overcome with the sugar.)
1/2 teaspoon cinnamon
1/4 teaspoon cardamom (I don't typically use this in my apple pies, but I love cardamom and decided to add it this time. If you don't have or don't prefer cardamom, you can use the same amount of pumpkin pie spice, which is what I typically use)
1 pie crust, single-crust (you can make your own or use a ready-made. I've made my own a few times and they're definitely a treat. Here's a solid recipe if you want to tackle that. However, I typically use Pillsbury's refrigerated kind simply because they're tasty and convenient. The choice is yours. If you use the bought stuff, you'll only need one of the two crusts in the box.)

1/3 cup unsalted butter, melted & slightly cooled
1/4 cup brown sugar (I used dark brown on 2 of my pies and light brown on the 3rd. It's up to you which you use. Dark brown has more molasses in it.)
3/4 cup all-purpose flour
1 teaspoon cinnamon

1. Preheat oven to 400 degrees. Unroll pie crust and line aluminum pie pan with it. Fold inward any crust that is hanging over the edges (so you'll have a thin top section of double crust). Crimp the edge and set aside. 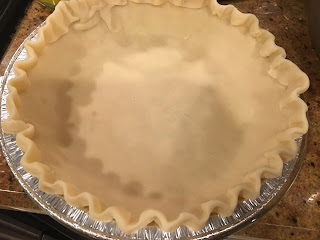 2. Peel, core, and slice your apples nice and thin. The secret to my apple pies is thinly-sliced apples. Place into large bowl.

3. Add lemon juice, flour, sugar, cinnamon, and cardamom (or pumpkin pie spice) to sliced apples and toss to coat. Set aside while you make your crumb topping. 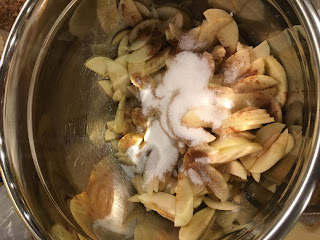 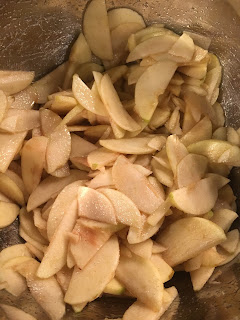 4. Combine brown sugar, flour, and cinnamon in a medium bowl. Use your fingers to combine them, making sure to break up any chunks of brown sugar. Pour melted butter into dry mixture and use a spatula to combine it. It'll look somewhere between pasty and crumbly. Set aside. 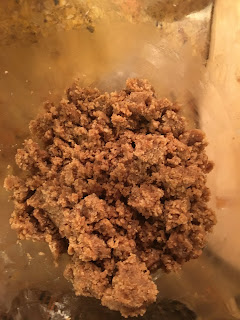 5. Add the apple filling to your prepared pie crust. DO NOT POUR IT IN. Use your hand or a slotted spoon to scoop it in there. (You don't want excess juice going in with the apples or the bottom will get soggy.) 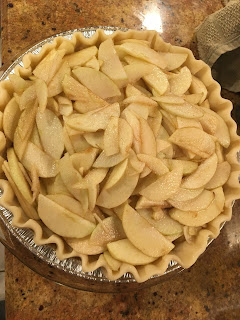 6. Use your fingers to crumble the crumb topping all over the top of your apples. It may seem like a too much crumb topping but it's not. It's the perfect amount. Remember: CRUMB rhymes with YUM. (Be careful as you spread it on top not to waste any. Crumb topping should be on the pie-- not the pan, the counter, or left inside the bowl. Because if it's any of those places, it isn't going to make it to your stomach, and that's just a travesty of pie.)

7. Place pie dish on cookie tin. (This step is important because it is both to catch any potential bubbly over-spill AND to help the heat do its thing to the bottom of the pie plate.)
8. Bake for 20 minutes at 400 degrees. Then, leaving the pie in the oven and not opening the oven door, turn the heat down to 375 degrees and bake for 20 more minutes. Then cover the edge of the pie with foil and return to the oven for 15 minutes. Then cover the whole top with foil and bake 10 more minutes. Finally, remove all covering and bake for 5 more minutes. (So, yes, that's 70 minutes bake time total.)

9. Remove to a wire rack to cool completely (still in the glass dish "liner.") 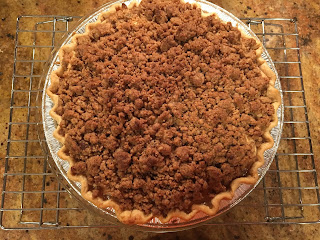 So there you have it. I've solved the mystery of how-to-bake-in-aluminum-tins. Right in time for holiday baking season. Hurrah. 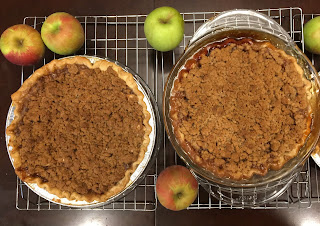 (Additional note: You can see in the photo above that the pie on the right was made directly in a glass baking dish. That one is going to my mom. I baked it in my 9.5 inch baking dish and followed the same baking times as I list in my directions and the crust looks like it held up pretty well (except for those bubbly spots toward the top and left where the filling bubbled up. Those areas look like they maybe could've been removed prior to the 10 extra minutes bake time I tacked on for the aluminum tin. So, for what it's worth, if you are not cooking in the aluminum tin, follow the directions as listed, but take it out at the 60 minute mark.)

Whatever you do, don't forget to gift one to yourself. You deserve it. Because remember: CRUMB rhymes with YUM.